This article continues the series for which the two most recent updates were:

The analyses from these are consolidated here with additional data for March 2018.

In part II of this article, I will review headway reliability and especially the less than stellar operations on March 29-31.

The mean temperature for March held fairly steady near zero with a slight increase in the final week. Major rainfall occurred on Thursday, March 29 coinciding with the Blue Jays Home Opener. That day was also the last business day of the week as March 30 was Good Friday. Both days are reviewed in detail later in this article. The statistics linked below are for the weather station at Toronto Island (YTZ) which better represents conditions downtown than data for the station at Pearson Airport (YYZ).

PM peak travel times stayed in the same range as previous months westbound across the study area. Because the original version of this chart received a lot of circulation in other media, an updated version will be presented in these articles for continuity.

Note that Good Friday, March 30, is not included in this chart because it is a statutory holiday, not a weekday.

There is an uptick at the end of the month, but this falls on Wednesday, March 28. 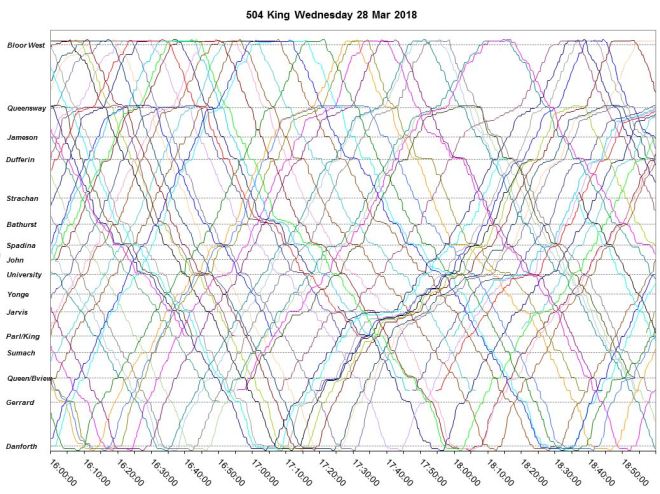 Severe congestion is evident approaching University Avenue and also at Spadina Avenue in the latter part of the hour from 5-6 pm (17:00 to 18:00). The problem begins with a backlog of cars approaching Jarvis, and once these move off through the pilot area, they encounter delays at traffic signals because it is common for only one car to clear the intersection on a cycle while the car ahead serves the farside stop. (This was also a problem for nearside stops before the pilot because of the TTC practice that a car must be at the stop before operators open the doors. Combined with traffic signal delays, this can throttle the rate at which bunched cars can clear an intersection.)

University Avenue poses special problems because north-south traffic can block the intersection robbing the streetcars of green time. However, the delays to westbound cars (after 6 pm) are greater in the chart above suggesting that the bunching has more to do with the slowdown than conflicting north-south traffic.

A similar problem with bunched service triggering queueing delays is visible at Bathurst eastbound at about 5:00 pm.

The full sets of 85th and 50th percentile charts are linked below.

Unusual events visible in these charts are:

Service capacity did not change much in March versus February as the relative proportion of trips provided by new cars was roughly the same during both months. The charts below show the capacity inbound at Bathurst in the AM peak and outbound to the west at Yonge in the PM peak.

The updated chart sets for various locations and times are linked here:

The charts in this section update the material presented in the detailed review with the addition of March 2018 data. In the interest of saving space, only selected excerpts are shown below, but the full chart sets are linked in pdfs.

The chart sets at the beginning of this article showing the behaviour of travel times include only the 85th and 50th percentiles. The charts here show four values instead of two:se show the conditions experienced by most riders (85th percentile) and the median values (50th), but they do not show the full range. The next sets of charts include two additional bands:

To the degree that the purple, green and orange lines are close together, the range of travel times riders see is narrow and predictable. This does not include any variation caused by service regularity or bunching that can affect both the wait time for a streetcar and the crowding on that car when it arrives. Even if travel times are consistent, irregular headways and crowding can make the overall experience worse than travel time data alone can show. Regularly spaced service, consistent travel times and adequate capacity can compound to improve the riding experience by more than the contribution of each component.

I will turn to headway reliability in Part II as this affects portions of the route well beyond the pilot area.

In the chart below, the early afternoon travel times westbound appear to increase compared with January and February. A review of the data for the affected days (March 14, 19 and 23) shows that in each case there was a minor service delay that pushed up the 100% values for the 1-2 pm period. This is not matched by a change in the PM peak (see chart above).

Although the maxima for the days in question go up (red line), the other percentiles are not affected as much.

The longer-term concern is that these events should be only a “blip” in the data, and not become a common type of service disruption.

In the previous article, the charts for individual days of the week were published in three sets, one each for the AM peak, PM peak and late evening. In this version, they are consolidated into one set of charts for each direction.

The data for March behave generally the same as in previous months with the notable exception that late evening travel times, especially westbound, appear to be rising with the onset of less frigid weather.

Most of the charts in these articles focus on specific time periods in order to highlight the range of values over various percentiles. The last set of charts shows the 85th percentile values for each hour from 6 am to midnight so that their evolution through the day is visible.

The data for March 2018, as on other charts, are generally similar to previous months. The pattern of substantial improvement in evening travel time on busy nights in the entertainment district continued into March. 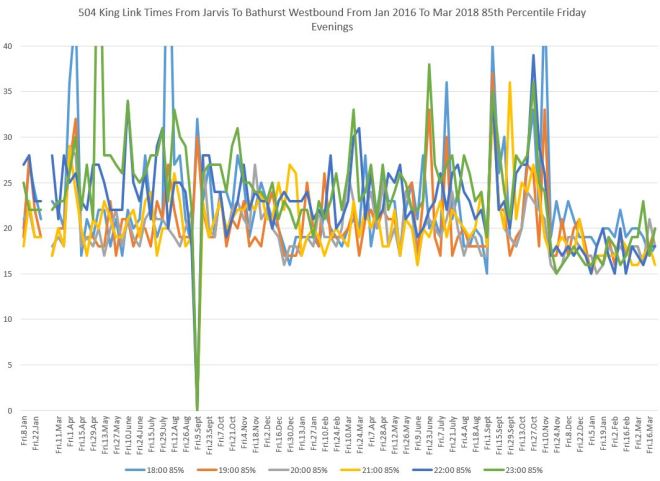 To be continued in Part II.