This article continues a series reviewing the quality of service scheduled and operated over the COVID-19 era in summer 2020 that began with an introduction and continued with Part I looking primarily at Scarborough. Part II moves further west looking at north-south trunk routes between Victoria Park and Jane.

There is a pervasive problem across the network shown in these data. Because of the need to quickly implement new schedules in May and June, two actions were taken:

The TTC could manage its service to smooth out the schedule problems on the fly, but the actual vehicle tracking data suggests that little of this happens. The result is that vehicles on many routes operate at erratic headways and therefore with uneven wait times and vehicle loads.

Moreover, the schedules have not been adjusted to smooth out their problems, possibly because the TTC expects to go to revised schedules sometime in the fall based on resumption of some demand such as school trips.

In two cases, Dufferin and Keele, articulated buses are supposed to be operating, but in practice the trippers, which might account for half of the service, use standard sized buses thereby reducing capacity and adding to crowding.

END_OF_DOCUMENT_TOKEN_TO_BE_REPLACED

There are comparatively few changes for the June-July schedules in 2020 because service is already operating at a reduced level due to the Covid-19 emergency.

Production of a table comparing old and new service levels with this change is tricky because the “before” situation included a lot of ad hoc operations by the TTC. I will try to pull something together and will update this article at that time.

During the May schedules, quick adjustments were made on many routes by removing previously scheduled crews rather than completely rewriting the schedules. This produced scheduled gaps which show up in the published timetables and in the data feed used by various trip planning applications. Many, but not necessarily all of these will be fixed for the June schedules.

On the bus network, there will be scheduled trippers overlaying the regular service on routes where there have been crowding problems. The table below is taken from the TTC’s memo detailing the new service arrangements. There are 90 AM and 87 PM trippers.

In addition to these trippers, a large number of crews will be provided for additional service as needed and to cover subway shuttle operations. There will be 180 weekday, 208 Saturday and 148 Sunday crews. Note that a crew is not the same thing as an additional bus because more than one crew is required to operate one vehicle if it is in service for more than 8 hours.

On the streetcar network, the current four crews for extra service will be expanded to eight. Half of these cover the morning and early afternoon period, while the other half cover the afternoon and evening

The streetcar loop at Bathurst Station will be rebuilt, and all bus operations will shift to the surface loop at Spadina Station. This arrangement is planned to be in effect until the schedule change on Labour Day weekend, but if work completes sooner, service will revert to Bathurst Station earlier.

Bathurst will remain as a bus operation until the end of 2020 while various construction projects along the line are completed.

Conversion of 506 Carlton to Bus Operation

Several projects will take place affecting 506 Carlton over the summer and early fall. These include:

When the May scheduled were implemented, an inadvertent error did not provide enough running time for streetcars to make the full Neville-Long Branch trip as planned. Buses were substituted on the west end of the route. Effective June 21, through streetcar service will be provided all day long, rather than only at late evenings and overnight.

All Queen service will operate from Russell Carhouse.

With the removal of streetcars from 506 Carlton, the 503 Kingston Road line will return on Monday June 22 operating to Charlotte Loop at Spadina & King. The TTC plans to switch this back to bus operation in the fall when streetcars return to 506 Carlton. The 22 Coxwell bus will revert to its usual arrangement running only to Queen Street during weekday daytime periods.

With the conversion of all overhead on the 505 Dundas route to pantograph-friendly suspension, the full route will operate with pans. Previously, a switch to/from poles was required at Parliament Street, the eastern end of pantograph territory on this route.

506 Carlton will be the next route to convert to pantograph operation. 504 King and 501 Queen cannot convert until after the reconstruction of the King-Queen-Roncesvalles intersection planned for 2021.

Three major construction projects will affect the 511 Bathurst route through 2020:

Beginning April 20, buses will replace streetcars on Bathurst for the remainder of the year. At the south end of the route, because of the configuration of the intersection at Lake Shore/Fleet and Bathurst, the buses will divert via Fort York Boulevard as shown in the TTC notice below. 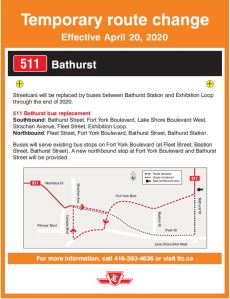 For the track replacement between Dundas and Wolseley Loop, welding of rail into strings was supposed to begin soon, but this has been postponed (as has similar work on Howard Park east of High Park Loop). The construction periods for these projects have not yet been announced.

At Bathurst Station, track replacement on Bathurst Street and inside the station itself is planned to occur between June 21 and September 5. During this work, routes 511 Bathurst and 7 Bathurst Bus will divert to Spadina Station. Arrangements for the 307 Bathurst Night Bus have not been announced.

In a recent article, I reviewed the TTC’s Service Standards Update. These standards included targets for headway reliability which are extremely generous and allow the TTC to claim that services operate “to standard” when actual rider experience is less than ideal.

Reliability of service is a top concern for TTC riders, and it has also been identified by TTC staff. Where the problem lies is that the targets offer little incentive to improve or measurement of just how bad the situation really is.

When the TTC talks about reliability, they inevitably trot out excuses about traffic congestion and the difficulty of operating service in mixed traffic. This has been a standard response to issues with streetcar routes for as long as I can remember. However, the typical TTC rider is a bus passenger, and this group has flagged service reliability, frequency and crowding as issues just as important as for streetcar riders.

Regular readers will know that over the years I have published many analyses of route performance looking mainly at the streetcar system, but also at selected bus routes. Recently, I decided to expand this to a number of routes in Scarborough where the quality of bus service often comes up in debates about the Scarborough subway extension, and to revisit some of the routes affected by construction on the Spadina extension which has now pretty much wrapped up. Apologies to readers in Etobicoke because this gives a central/eastern slant to the routes reviewed here, but I have no doubt that route behaviour in our western suburb is similar to that on the rest of the network.

This post may give some readers that dreaded sense of “TL;DR” because of the amount of material it contains. It is intended partly as a reference (readers can look at their favourite routes, if present), and partly to establish beyond any doubt the pervasiveness of the problem with headway reliability facing the TTC. This problem exists across the network, and setting performance targets that simply normalize what is already happening is no way to (a) understand the severity of the problem or (b) provide any measurement of improvements, should they be attempted.

The data here are taken from January 2017. The analysis would have been published sooner but for a delay in receiving the data from the TTC, a problem that has now been rectified. As always, thanks to the TTC for providing the raw material for this work.

Although January is a winter month, the level of precipitation, and particularly of snow, was unusually low for Toronto, and so weather delays do not lead to anomalies in the data.

Toronto Precipitation and Temperatures for January 2017

The TTC’s current attitude to service reliability is to focus on conditions at terminals with the premise that if service leaves and arrives on time, then there is a good chance it will also be in good shape along the route. This is a misguided approach on two counts.

First and most important, there is little indication that service from terminals is actually managed to be reliable, and the “targets” in the standards provide a wide margin by which unreliability is considered acceptable. In particular, it is possible for services to leave termini running as bunches of two or more vehicles and still be considered “on target”.

Second, any variability in headway from a terminal will be magnified as buses travel along a route. Buses carrying larger headways (gaps) will have heavier loads and run late while buses closely following will catch up. The result can be pairs of buses operating at twice the advertised headway, and with uneven loads. Without active management of service at points along a route, the problems become worse and worse the further one progresses away from a trip’s origin. Again, the generous standards allow much of this service to be considered acceptable, and so there is no need, on paper, to actually manage what is happening.

TTC operators are a great bunch of people, overall, but the laissez faire attitude to headways allows those who prefer a leisurely trip across their route to run “hot” with impunity. The worst of them are, fortunately for riders, only a small group. The larger problem is the degree to which irregular headways are a normal situation across the system.

The balance of this article looks at several routes primarily for their behaviour near terminals as this matches the point where the TTC sets its targets, such as they are. To recap the Service Standards:

The charts which follow look at actual headways, not scheduled values, and it is clear throughout that the typical range of values exceeds these standards.

END_OF_DOCUMENT_TOKEN_TO_BE_REPLACED

In the first part of this series, I reviewed the headways operated on 7 Bathurst Bus during the months of March and April 2014, with December 2006 for historical comparison.

This article looks at running times for the route, the time needed for buses to travel from one place to another, and the differences between each of the three months’ worth of data.

END_OF_DOCUMENT_TOKEN_TO_BE_REPLACED

Effective with the April schedules, the TTC changed the 7 Bathurst to formally be an articulated bus route on weekdays. Headways were changed to reflect the larger capacity of the vehicles, and the TTC trotted out a commonly-cited story that fewer, larger vehicles are easier to manage and can provide better service than more, smaller ones.

Did this actually happen? What does the implementation on Bathurst bode for other major bus routes, not to mention the streetcar system which will start moving to larger vehicles in fall 2014?

In these articles, I will look first at the headways actually operated on the route for March and April 2014 (the before/after pair), and later at the time required for vehicles to make their trips, congestion and layover times that affect the service.

As it happens, I also have data from December 2006 for this route, one of the first sets of data I attempted to analyze when I started on this effort back in 2007. How has the service changed between late 2006 and early 2014?

END_OF_DOCUMENT_TOKEN_TO_BE_REPLACED

Sept. 23, 2020: The article reviewing the Ontario Line Environmental Conditions report has been updated with comments on the downtown section of the proposed route.