Updated April 23, 2018 at 9:30 am: A section has been added following the original article to discuss travel times over the full route from Main Station to High Park including weekend data.

With the temporary conversion of the 505 Dundas and 506 Carlton routes to bus operation for much of 2018, there is a chance to compare how these routes operate with each vehicle type. In this and future articles, I will review travel times across the routes as well as headway reliability.

Data for 506 Carlton that I have collected runs from June to October 2017, and from January to March 2018. For the purpose of speed comparisons, weekdays from January 8-19 (streetcar) and March 19-28 (bus) 2018 are used. This avoids major storms as well as periods when schools were closed and traffic was lighter than normal.

There are seasonal variations in travel times due to the nature of streets and neighbourhoods transit services run through. As the year progresses, it will be possible to compare data for warmer months when the streets are busy between 2017 and 2018 data, although this must be tempered with the effect of diversions that were in effect during 2017.

There is a slight improvement in travel time at certain periods of the day and certain locations/directions for buses, but this is not large or widespread even in off-peak periods. Buses tend to reach higher peak speeds between stops where conditions permit, but in many cases the speed profiles are comparable for the two modes.

Bus headway reliability has been a topic of some discussion on Twitter along with the capacity of the replacement service, but I will turn to those issues in the second part of this analysis.

The 506 Carlton route changed from time to time over the past year, and this affects the travel times reported here.

The charts presented here are similar to those I have used in previous articles with some minor changes.

In the chart sets containing percentiles of travel time values, there are three groups of charts.

For the collection of 85th percentiles, the travel times rise and fall through the day. Detailed comments appear later in the article, but a few points are worth noting here:

Data are grouped based on the hour when a vehicle enters the section being measured, in this case crossing Yonge Street westbound. 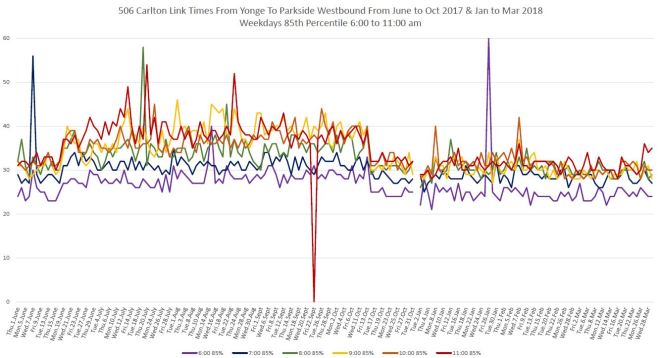 Sample 85th percentile values for 6 am to noon 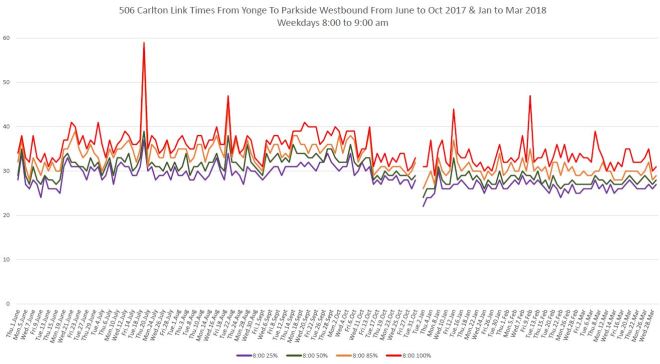 Sample percentile values for the AM peak hour

The charts showing average speeds are organized differently to show vehicle behaviour over the length of the route.

Methodology: From the tracking data, we know where each vehicle is every 20 seconds, and from this can derive the speed at that location and time. The route is subdivided into 10m segments, and the calculated speeds are allocated to wherever the vehicle is observed at a given time. The total is then divided by the number of observations to produce average speeds. The downward notches in the charts correspond to places where vehicles stop, or at least slow, typically on the approach to a transit stop or signal. Not all trips stop at all locations, and so a non-zero average can result. Where the downward “notch” approaching a stop is wide, this indicates vehicles queueing on the approach due to congestion. 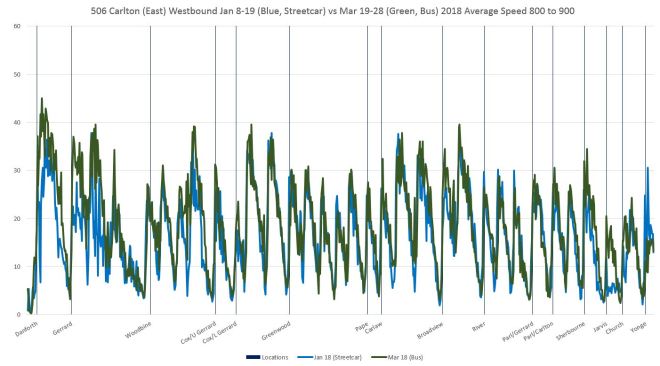