The year 2017 brought a long-term shutdown of the 501 Queen street service west of Sunnyside Loop to permit various construction projects on The Queensway, at Humber Loop and on Lake Shore Boulevard. Although work will not be seriously underway until the weather improves, the year-long shutdown also gives the TTC some breathing room in its ongoing problem of streetcar fleet availability as it awaits the long-overdue Bombardier Flexity order.

City TV recently reported that riders on Lake Shore are very pleased with the replacement bus service. That’s little surprise considering how much more frequent the buses arrive compared to the streetcars. A well-known aspect of service evaluation is that riders are much more sensitive to waiting time, especially in bad weather, than to in-vehicle travel time, especially if riding conditions are moderately comfortable.

There is also the question of comparative travel speeds with bus operations versus streetcars. Do the buses make better time than streetcars and, if so, when, where and why?

The 501 Queen car has been through a few changes in the past year or so, and riders on the west end of the route are understandably unhappy with constant changes.

The 501 Queen car operated as a continuous route from Neville Loop at its east end to Long Branch Loop at the west, with half of the service scheduled to short turn back from Humber Loop. This design was in place for many years after the TTC consolidated the 501 Queen and 507 Long Branch cars as a money-saving tactic in the mid 1990s, but this arrangment never worked as well, especially west of Humber Loop as the 501/507 split. The most common problems with the amalgamated services were:

Effective January 2016, the services were split at Humber Loop with a separate streetcar operation from Humber to Long Branch operating very much like the former 507 Long Branch car. Through trips from Neville to Long Branch only operated very late in the evening during the bridge period to the all-night 301 Queen service over the full route.

Scheduled service west of Humber was improved to every 10 minutes or better. With cars captive to this part of the line, riders had a reasonable expectation that service would appear on a more timely basis than before. Short turns of westbound 501 Queen cars could still create problems, however, due to less reliable service making the connection at Humber Loop.

For much of 2016, the Queen service diverted both ways via King between Shaw and Spadina to allow water main construction on Queen Street. This added substantially to travel times and frayed the service quality, a problem compounded when schedules reverted to their “standard” configuration well before the construction and diversion were actually completed. (I will explore the service on the main part of the Queen route in a separate article.)

Effective January 2017, all Queen streetcars turns back at Sunnyside Loop (west of Roncesvalles). A bus service (501L) operates from Long Branch to Dufferin Loop with an overlap between streetcar and bus service to simplify transfers. An additional loop shuttle (501M) serves the condo district on Marine Parade. 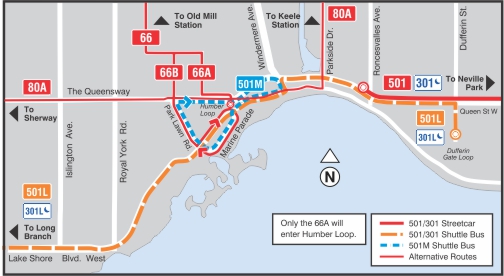 Bus service on the 501L to Long Branch is more frequent than the 501 streetcars it replaced:

In the following sections, comparative travel times are given for four months:

For cases where the section of the route being compared spans Humber Loop, only data from November 2015 and January 2017 are included because most service during late 2016 did not run through from The Queensway to Lake Shore Boulevard.

Each set of charts contains six pages containing weekday, Saturday and Sunday data for eastbound and westbound travel times showing the average for each hour of the day. Times between points are in solid lines, while the standard deviations in values are dotted. The same colour scheme is used so that, for example, November 2015 data are in red on all charts.

Eastbound travel in the AM peak shows a much higher “hump” for November 2015 than for later data because of construction effects at that time. The streetcar running times are all quite consistent with the bus times being about 10% lower throughout the day. Bus times are also lower than streetcar times on weekends, although not by the same degree.

The charts below subdivide the route to isolate areas that could have different characteristics. Note that the scale on these charts is different from the charts covering the full distance from Long Branch to Humber.

Bus running times are slightly better than streetcar times eastbound on weekdays, but otherwise lie in a similar range. The November 4, 2016 westbound delay shows up here as a spike in average travel times as do a few other smaller delays.

As with the Long Branch to Kipling segment, weekday travel times eastbound for buses are slightly better between Kipling and Royal York.

Westbound running times show a hump for buses (January 2017) during the hours 9 to 10 am, and noon to 1 pm. Examination of the detailed data reveals that this corresponds to layovers at Kipling that are probably for crew changes. The result is that some trips have unusually long travel times, several of more than 15 minutes.

Travel times during January 2017 (buses) for eastbound trips on weekdays are slightly faster by bus than by streetcar.

There is less difference between buses and streetcars in this segment than the others above. The construction-induced spike in AM peak travel times in November 2015 eastbound to Park Lawn shows up stongly here.

The peak for buses on Saturdays at 10 am was caused by one vehicle on January 28 that took a long layover west of Humber Loop. (This is an example of how the relatively low number of trips within an hour, and the fewer weekend days compared to weekdays, causes an outlier in the data to have a noticeable effect on the average.)

These charts compare streetcars in November 2015 with buses in January 2017. The bus trips are often faster, but this is due in part to their taking a different route that excludes serving Humber Loop. Moreover, the buses are not as constrained on The Queensway by slow order and delays at “transit priority signals” compared to the streetcars.

These charts compare streetcars in November 2015 with buses in January 2017 showing the collective effect of shorter travel times over the route west of Roncesvalles.

Another way of comparing the two modes is to look at fine grained vehicle speeds along the route. The charts below include:

Each set of charts contains 19 pages showing the average speed of vehicles along the route. Each page contains data for one hour of service with streetcar data in blue and bus data in orange. Where the average speeds are similar, these lines will lie more or less on top of each other. Where there is a difference, the lines are separated. Notches in the charts correspond to locations where most vehicles stop. The data are presented east-to-west so that Humber is at the left side of the page and Long Branch at the left.

An interesting contrast between the eastbound and westbound charts is the behaviour at stops. There is a consistent profile to speeds at stops with a gradual drop on the approach, but a quick acceleration on leaving. This shows up most obviously in the way the shape of the dips reverses on the east and westbound charts.

However, another difference is that for eastbound trips, the dip for streetcars tends to be deeper than for buses. My hypothesis for this is that streetcars have to wait longer at stops on Lake Shore because it is a wide street and passengers must walk out to the stopped car. This takes longer than on a narrow street, and certainly longer than for a bus stopping at the curb. Other factors will include traffic signal behaviour (if a red signal traps the transit vehicle for one cycle, the mode has no effect on travel time). Locations with safety islands should not exhibit the same behaviour as those where riders have to cross lanes to reach streetcars. Finally, of course, inbound trips have more loading than unloading, and so the effect is not as visible westbound.

Between Dufferin (where the Queen buses turn off the route to loop south to the loop at the CNE) and Windermere, both modes share the same route but their speed profiles are quite different. Of particular interest is that the streetcars run slower than the buses even where the streetcars are on their own right-of-way. This is clearly a question of operating practice, not of traffic congestion, and is probably related to a long evolution of “safety” related speed restrictions on this section of the route. This is particularly visible west of Roncesvalles where streetcars tip-toe through the special work at the carhouse and at Sunnyside Loop.

Also visible is the effect of nearside versus farside stop placements where the streetcars can be held twice, one for a green signal, and again to serve their stops. Buses stopping nearside stop only once.

If Toronto is to have a “transit first” attitude to moving vehicles, one important change must be the understanding of how streetcars can be delayed by traffic design and by operating practices that bring on slower operation.

Once the full bus replacement of the 501 Queen route begins in May 2017, I will compare operating speeds over the entire line for the two modes.

20 thoughts on “Buses Vs Streetcars on 501 Lake Shore Service”