After publication of a series reports going to Toronto’s Executive Committee on March 7, there have been many competing claims about just how much the Scarborough Subway is going to cost. Subway advocates prefer the lower number of $3.35 billion cited as the base cost of the subway itself plus an improved bus terminal, while others point out that many elements have been omitted from this number.

I reviewed many of the reports in a previous article, but this post looks beyond the subway itself to other projects that are required for the subway to open. Some of these are unfunded, or are now planned for a date beyond the Scarborough line’s opening, or are simply missing from TTC and City plans.

The Scarborough Subway project, as described in all previous reports included the following three items:

These values, totalling $3.56 billion, appeared in:

A presentation to a Value Engineering workshop by the TTC in September 2016: 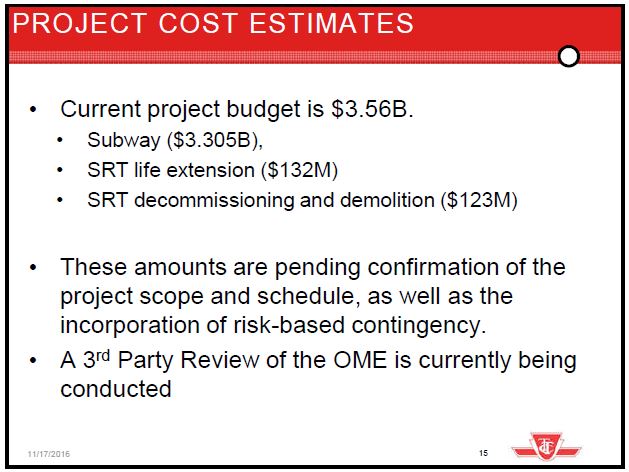 The $3.305 billion cost for the subway itself is intriguing because it has not changed between the 2016-25 and 2017-26 versions of the budget. The detailed views are below. (These are taken from the detailed TTC budget books that are not available online.) 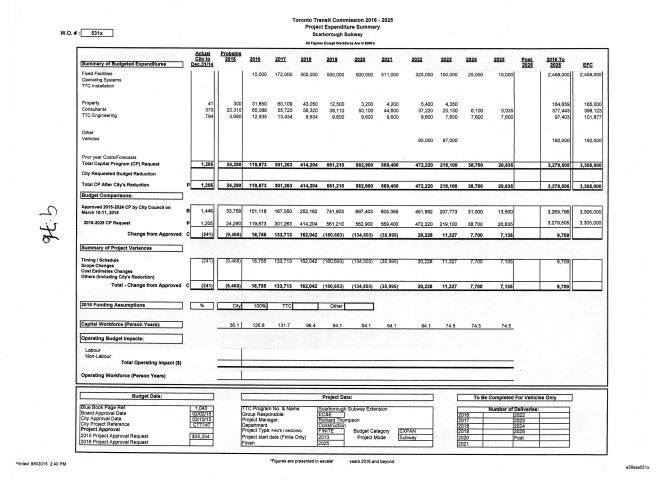 The major change between the two versions to line item totals is that an allowance for property has been offset by an increase in “fixed facilities”. However, expenditures timings change, and there is no adjustment for inflation. I have asked the TTC for comment on this and related matters.

In the 2017 Capital Budget the section for the SRT life extension shows values only to 2023 and the demolition of the SRT structure is in 2025. These timings do not  make sense except in the context of a 2023 opening as described below. It is clear that these two items have not been updated to reflect the later opening date and the added cost this brings for ongoing support of the old system, and inflation in the cost of demolishing and removing it.

From the description of the Life Extension project:

Additional Costs Not Included in the Current Projected Total

The $3.35 billion cost now claimed for the SSE project does not include several items cited in the City’s reports:

As noted above, some costs have been estimated based on a 2023 opening for the subway, but without allowances for inflation to a later date.

There are inconsistencies in the timing of various projects related to the Bloor-Danforth Subway that existed in the 2016-25 budget, and still pose major problems for 2017-26. These are all linked to the opening of the SSE which, like the TYSSE extension to Vaughan, will be built with Automatic Train Control (ATC).

The TTC plans to resignal Line 2 following completion of Line 1 YUS in 2019. Here is the budget summary for these projects (click to enlarge):

The T1 subway fleet is due for replacement in the mid 2020s, but current plans show this happening substantially after the SSE opens with delivery of prototypes in 2024 and the remainder of the fleet from 2026-2030. This means that a large part of the BD fleet would not be able to operate on ATC, and therefore could not run beyond Kennedy Station.

There is also a provision in the SSE budget (above) for additional trains with funding in 2022-23 of $182 million. This corresponds to the original scheme to open the line in 2023, but not to the current fleet plan. In the table below, six trains are shown as a service addition for the SSE in 2023, but these come from available spares within the T1 pool (even though they cannot run in ATC territory). This would provide an AM peak service with alternate trains turning back from Kennedy Station, and overall BD service at the same level as today (2’20” west of Kennedy, 4’40” to STC). The replacement fleet begins to arrive in 2026 through 2030 including the seven trains funded from the SSE project budget. Full service to STC comes in 2027, but this and an allowance for ridership growth are clearly based on a 2023 SSE opening date.

The fleet plan is out of sync with the opening date for the SSE and its signal system.

The T1 replacement project is on the “City Requested Budget Reductions” list, and does not have any funding within the current ten-year Capital Program. This represents a pressure within the City’s overall capital budget and its “below the line” iceberg of capital projects it cannot afford.

Finally, a new fleet cannot be provisioned without a new yard. This is required both to provide overlapping capacity for new and old trains (unlike Line 1 where Wilson Yard had room for expansion to handle the H to TR fleet changeover). There are also design problems with Greenwood in that the shops were not planned for 6-car unit trains, and major renovation would be required to do this, all within an active shop for the BD line.

The TTC recently authorized the purchase of land near Kipling Station for a new subway yard. However, the actual construction of a yard does not appear in the Capital Budget and there is no provision for this in the TTC’s financial plans. Quite obviously this facility is required before the new trains begin to arrive. If the T1 replacement project moves forward so that the new trains can all be here before the SSE opens in 2026, then the new carhouse must exist by the early 2020s. Considering how long it takes the TTC to get approval for a major new facility, let alone build it, this is a critical project that has not even been discussed in the context of SSE planning.

None of this is news, and the TTC is well aware of the problem. I wrote about this as part of my 2016 budget coverage, and the TTC replied with details of what is really needed. Management plans to bring an overall plan for the renovation of Line 2 to the Board at its March meeting, but this will inevitably produce ripples in the City’s budget. That can be fixed, in part, if some of Toronto’s PTIF money (the federal infrastructure program) goes to accelerating these projects, but this has to be fitted in among the many hopes Toronto has for that funding.

These are not, strictly speaking, “Scarborough Subway costs”, but they are projects triggered by the decision to extend Line 2 BD. Although federal money could be available, the City will have to pony up its share, and this will fall right at a period when it is tight for capital.

Toronto Council deserves to see the whole picture of funding and financing requirements for the SSE and related projects. Too much is hidden either by its unfunded status, or by simple omission from the overall plans. This inevitably creates a crisis when – Surprise! – a project is forced “above the line” because it cannot be avoided. This brings new spending that crowds other works, many having nothing to do with transit, off of the table. This is no way to handle City budgeting.