This article continues a series looking at the travel times on routes where bus lanes have been proposed to compare pre-covid “normal” conditions with those after traffic volumes were substantially reduced by the pandemic. The intent is to show what are probably the “best case” conditions for transit priority with relatively little traffic congestion to illustrate the locations and times when bus lanes would bring a saving, if any, on each route.

Reserved lanes are proposed for Steeles Avenue West between Yonge Street and Pioneer Village (aka Steeles West) Station. This stretch contains segments that are badly congested and not just in the peak periods. However, the remainder of the route west of Pioneer Village Station and on Yonge south to Finch also have severe congestion which this proposal does not address.

Yonge from Steeles south to Cummer has “diamond” HOV lanes marked with paint and signs, but travel times are very slow suggesting that these are more decorative than serving to actually marshall traffic. This is a cautionary tale for those who think that physical lane reservation to achieve true priority is excessive. Buses also face the need to make left turns northbound at Steeles and southbound at Finch Station.

West of Pioneer Village Station, the service level is much lower than to the east and the route will continue to operate in mixed traffic. However, this is also an area of severe congestion, and I have included a review of the western segment here for those who are interested. Steeles is a good example of the fact that “congestion” is not just a downtown phenomenon, and given the growth patterns and transportation plans of the suburbs, it is unlikely to disappear.

Steeles Avenue has split jurisdiction between York Region and Toronto, and any change in lane usage or street geometry requires agreement by both of them. During the debate at Toronto’s Executive Committee, one member suggested that York Region might be asked to contribute to the cost of implementing bus lanes on Steeles because their services would benefit. This idea did not find its way into the approved motions. That is just as well considering the infrequent service on almost all YRT routes operating on portions of this section of Steeles, and the limited savings bus lanes would bring to them. (There are no VIVA services here.)

Between Yonge and Pioneer Village Station, the longest travel times occurred in November 2019, and there is a drop to post-covid levels in June 2020. If these values hold up as traffic returns, there will be a definite benefit from bus lanes especially eastbound in the PM peak. Whether the street can absorb the effect of losing a lane in each direction is a separate matter. By the evening, there is little difference in the values. 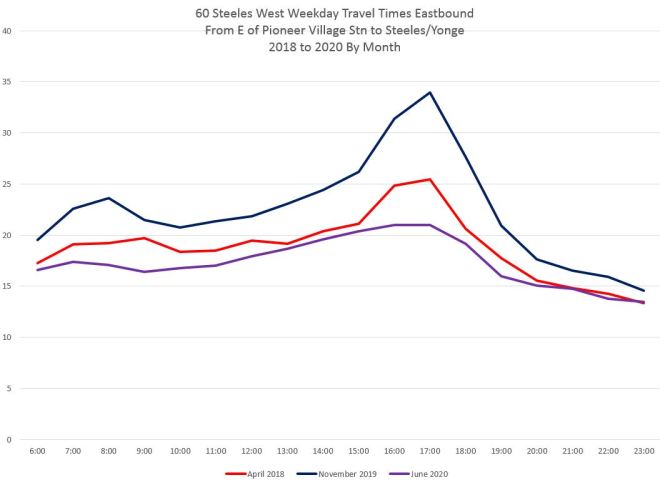 On Saturdays and Sundays, there is much less to be gained. A question for planners is whether future traffic growth would push what is now a low, wide peak on Saturday afternoons to something more severe such as we see today on Dufferin Street. The lack of a clear benefit on weekends would make fully separated lanes hard to argue for.

On Sundays, the value for the 6-7 AM portion of the charts is zero because service during that hour is provided by the night bus. 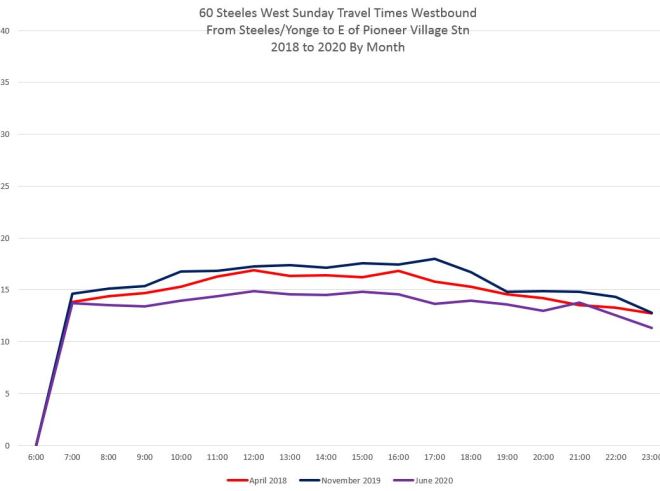 The charts below compare vehicle speeds during the middle of November 2019 (green) and the first half of June 2020 (purple) between Finch and Pioneer Village Stations. The charts should be read in the direction of travel with eastbound running from right to left. The dotted trend lines show the overall difference between speeds. Where they are close together, buses travel at roughly the same speed. Where they are further apart, the November 2019 values are slower.

When there is a sharp downward point at an intersection, this indicates that buses approach at speed and then stop. When the area of lower speed is extended, this shows congestion approaching the intersection.

For the peak hour from 8 to 9 AM, the westbound service ran slower in 2019 mainly in the area east of Dufferin and to a lesser extent east of Keele. Note that the difference is stronger for westbound buses than for eastbound in the second chart below. 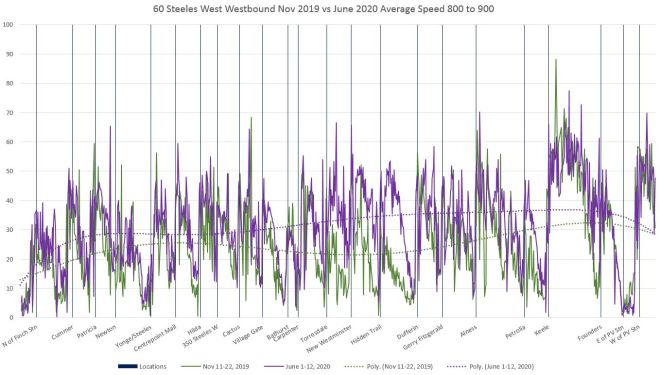 The AM peak eastbound service ran slightly slower in 2019 roughly from Keele to Dufferin, but ran much more slowly on Yonge Street enroute to Finch Station where there is supposedly “transit priority” by way of an HOV lane. 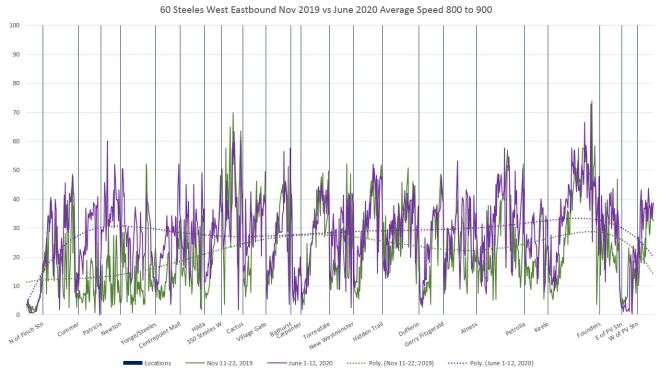 By midday, there is less divergence between 2019 and 2020 speeds with the most affected area being east of Keele Street

For the PM peak hour of 5 to 6, similar patterns are visible with congestion on either side of Keele Street and along Yonge Street in 2019 compared to 2020. Congestion occurs in both directions although it is worse eastbound than westbound.

The files linked here contain the full sets of charts for travel times and speeds for those interested in the details.

For the section of 60 Steeles west of Pioneer Village Station, the difference in travel times varies by time and direction between November 2019 and June 2020 data, but as with the eastern section, there is little difference evenings and weekends.

Only half of the locals and none of the express trips operate west of Pioneer Village Station, and so buses are far less common on this part of Steeles. 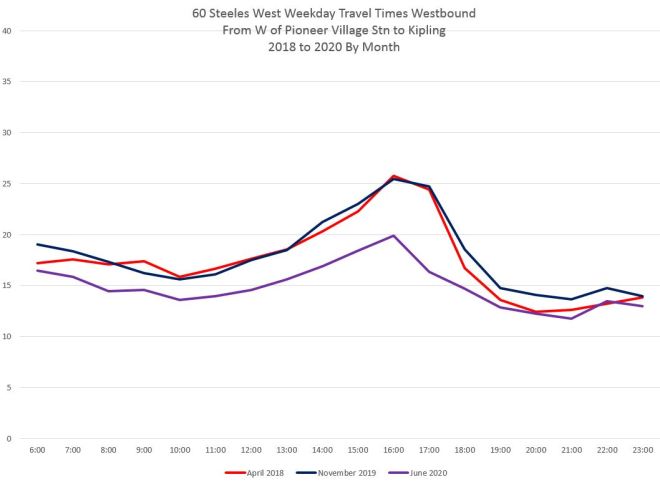 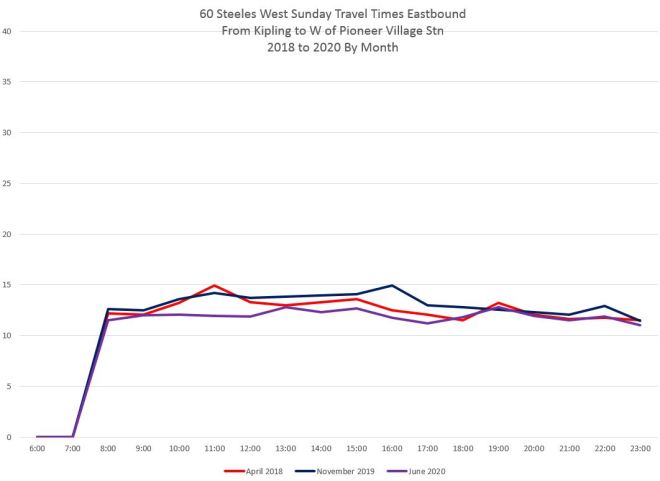 In the AM peak hour from 8 to 9, there are only a few locations where westbound speeds are better in the June 2020 data compared to November 2011, but eastbound is different story. Between Kipling and Jane, travel speeds in the 2019 data are consistently below those for June 2020.

Midday the situation is not as bad as during the peak with westbound congestion mainly between Jane and Highway 400. Eastbound, what congestion there is lies further west on the route. 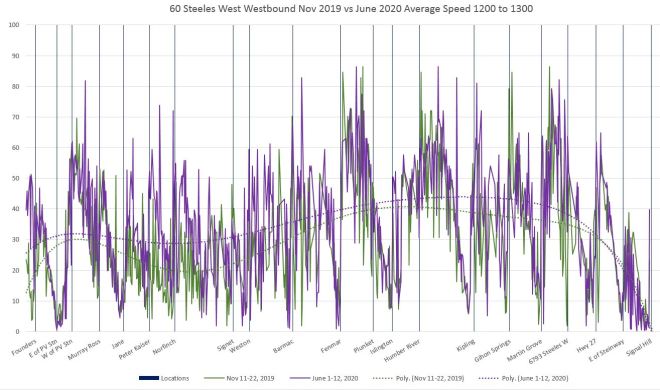 In the PM peak hour from 5 to 6, the differences in travel time stretch over much of this portion of the route, although westbound travel is more affected than eastbound west of the Humber River.