The TTC Board met on January 24 to consider the first substantial agenda of the new Board’s term. Among the issues discussed were:

There was a staff presentation of the Capital Budget and Plan followed by extensive discussion by the Board. The sheer scale of the $33.5 billion plan (discussed in a previous pair of articles here and here) brought wide-eyed reactions, but a consensus that the plan was long overdue. The TTC and its funding “partners” really need to appreciate the amount of money needed to continue owning and improving the existing system, let alone building any extensions.

The presentation is a condensed version of the “Making Headway” report. A few charts within it make a brave attempt at saying the TTC’s needs are not quite as bad as they may seem by comparison with historic spending patterns and with the overall provincial and national spending.

The chart below is similar to one in the main report, but it includes a line at $1.2 billion which is the average funding level from 2014 to 2019. The implication is that because money has always been found in the past for this level of spending, this will continue and the dip from 2019 to 2023 will not be as severe. This ignores the reason for the decline in the City’s planned contribution (green slice of the chart) arising from exhaustion of the self-imposed debt limit in coming years. All of the headroom has been consumed by planned borrowing for the Gardiner East rebuild and the Scarborough Subway Extension. 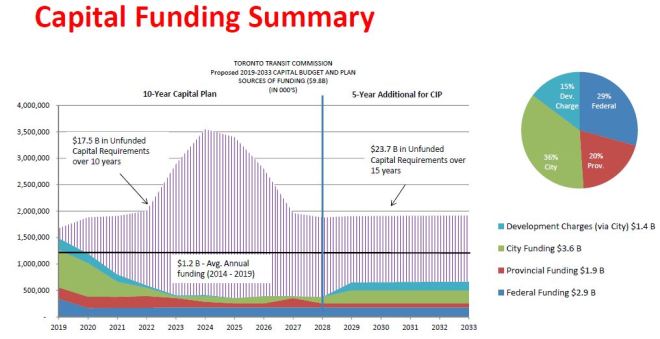 At a provincial and national scale, the relative sizes look like this: 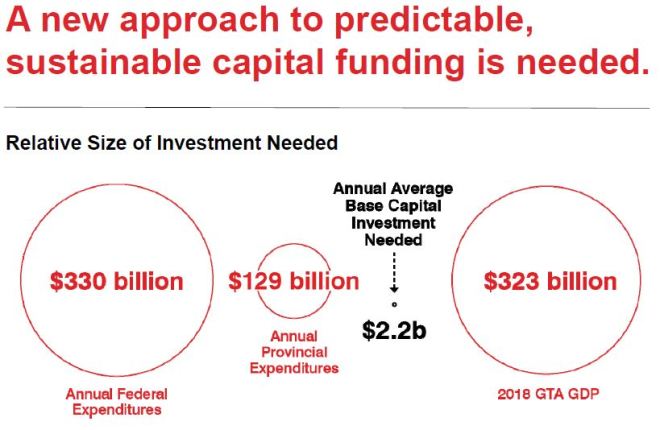 Without question $2.2 billion per year is small compared to other financial streams, but there are two obvious problems. First, the call for provincial and federal funding will compete with major expansion projects such as the Relief Line, not to mention the constantly shifting political winds at both levels. Second, the spending does not conveniently run at a flat level over 15 years, but peaks at $3.5 billion in the mid-2020s. Even if this level of sustained funding were provided, a bridging strategy will be needed to get past that peak.

Furthermore, there are project dependencies that have not been fully explored, and there is a good chance that some spending now shown in the “out years” beyond 2028 will in fact be needed sooner.

The ten year Capital Plan from 2019 to 2028 includes a small amount of money for design work on the Scarborough Extension, the Relief Line South and Waterfront transit. However, there is no funding for actual construction. As previously announced, about $325 million worth of property acquisition and utility work for the Relief Line will be moved forward into 2019-2020 with half being funded by the City. The other half depends on contributions from other governments who have yet to commit to this.

I will address other issues with the Capital Plan including project timing, scope creep and operating budget effects in a future article.

To no great surprise, the Board voted to implement the proposed fare increase effective April 1, 2019. Several deputants spoke to various issues re fares, and there were a few common themes related to poorer riders:

As I pointed out in an earlier article, there is no benefit to the Fair Pass program for students and seniors because the “discount” simply brings the fare down to the student/senior rate they are already paying. There also remains the question of whether the City will fund the expanded eligibility for phases 2 and 3 of this program.

The staff presentation included some information that was not part of the original report.

During the course of debate, the question arose of whether City staff were prepared to support a request for $22 million in additional subsidy when the guideline issued by the City Manager had been that all departments and agencies flatline their spending. TTC CFO Dan Wright replied that that the City would accept 3% but no more. Until the City’s own budget launch on January 28, we will not know whether this amount has actually been included.

In spite of regular calls at the City for zero increases in budgets, over the years there has actually been a consistent increase in the dollars the TTC receives. The $22 million “ask” for 2019 is actually smaller than the change in any year back to 2014. Of course in the wider City budget context, any extra money the TTC does get might come out of budgets in other programs and agencies. This triggers the inevitable challenge to transit boosters of “where would you cut”. That is the wrong question, but the debate is constrained by preconditions on the level of property tax increases.

The presentation rattled off the now-familiar list of improvements, initiatives and achievements, some of which have been in place for a few years. Sadly, the charts from the CEO’s report on January 12 in which “achievements” in service delivery were trumpeted are duplicated here. These include a substantial understatement of the service actually provided in fall 2017 on the streetcar network against which staff claims to provide 56 more streetcars/buses in 2018. They simply neglected to count the buses operating in 2017.

There is an ongoing problem with counting passengers and the TTC’s “ridership” has been falling. The underlying issue is that over half of all TTC trips are taken using a pass of some kind, and sales of these are converted to “rides” using multipliers that are adjusted from time to time. It is quite possible that past ridership has been overstated, and the current “fall” is a result of the calculation used to convert passes to rides, not an actual loss of riders. 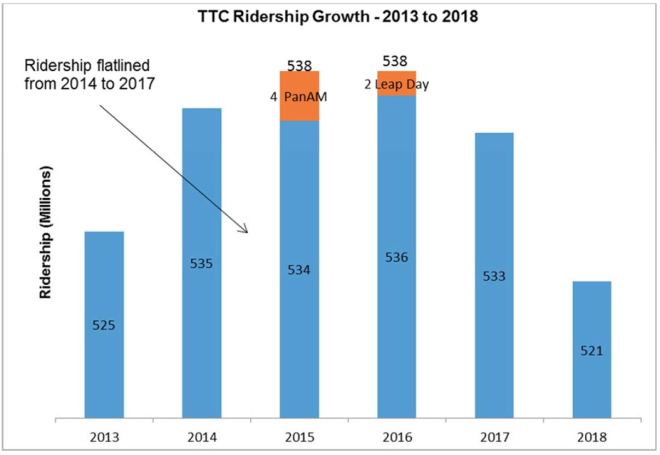 Although “ridership” has been flat, “boardings” are going up. A “boarding” is one passenger getting on one vehicle, and so there will be multiple boardings for any “ride” that involves transfers. Boardings are going up even though ridership is not. The average fare is also rising as riders switch from flat rate passes to pay-as-you-go on Presto, and passenger revenue is also climbing. In the chart below, the raw numbers are normalized to a scale of 2015=100 to show the relative level of the changes in each value. 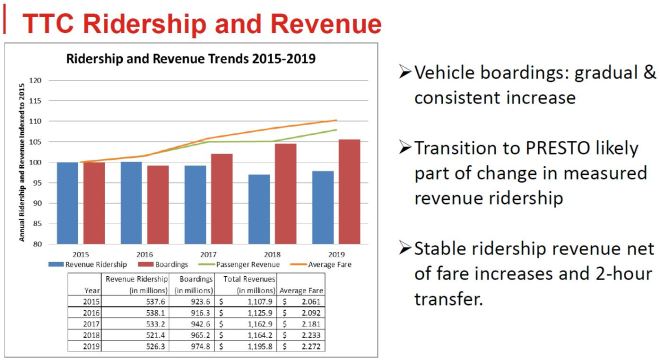 The chart below shows the relative size of cost reductions made by TTC management from 2015-2019 and the added costs the system has absorbed over the same period. The lion’s share of the additions (blue) come from Council-mandated policies including service improvements and fare reductions. A smaller slice (red) comes from inflation and collective bargaining agreements (CBAs). Next is the rise in Presto fees (green) as riders shift to that mode of payment. There is no tracking of offsetting savings, if any, from winding down the legacy fare system. Finally, there is the cost of the Vaughan subway (TYSSE, yellow) which has added to the total funding requirement without generating offsetting revenue. 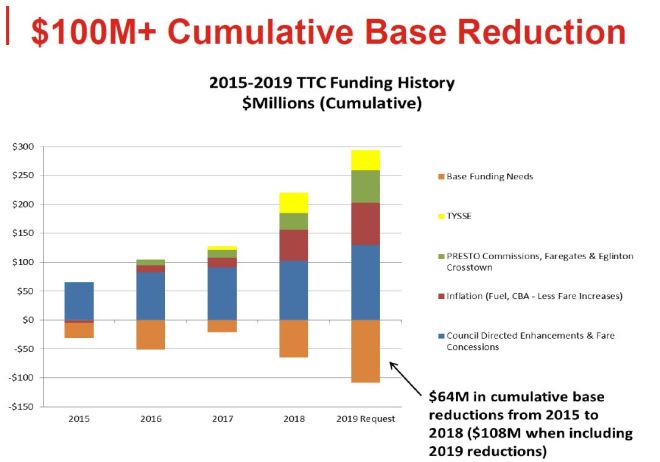 TTC staff plan to bring a report to Board late in 2019 with a multi-year service and fare plan. This will include a discussion of the fare schemes Presto can (or might) support. Frankly, this is a report that should have been part of the new Board’s “welcome package”, but inevitably in election years this type of work simply stops. Any new scheme will inevitably bring costs over and above those flagged in the operating and capital budget projections.

TTC service has been plagued with problems due to the cold weather and other infrastructure issues. Situations that individually might have been merely annoying compounded to make the system unusable for many would-be riders, and extremely uncomfortable for those who actually managed to get on.

There were other problems through the day on both major routes. This was quite literally a “prefect storm” of events not unlike the one that hit the TTC almost a year ago. The TTC has not announced whether they will produce a public “post mortem” of events together with plans to avoid or at least minimize this type of problem in the future.

Track Repairs Between Union and King

The curve from Union to King northbound is the second tightest on the system as riders who endure wheel squeal when the lubricators fail know only too well. The rail was badly worn and due for replacement, a job which would normally occur without affecting service except, possibly, for extended shutdown hours to allow work to be completed. However, once the project was underway, the complexity of repairs that were required became evident.

(Illustrations here are taken from the staff presentation to the Board. Click to expand the view.) 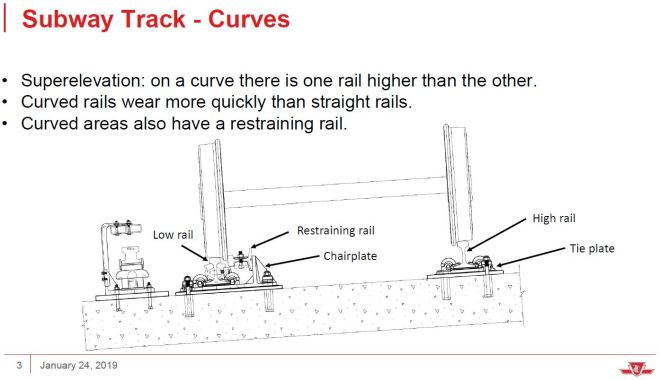 Railway cars go around corners because of the force bearing on wheel flanges from the track. The diagram above shows the typical installation on a curve.

If this were a very gentle curve, there would probably be no superelevation, and the flanges bearing on the outside rail of the curve would be able to guide a train. However, this does not work for tighter curves and the force to guide trains is applied in a different way. Although the flange on the “Low rail” above is on the wrong side to guide the train, there is a separate restraining rail mounted horizontally that presses on the wheel. That rail in turn is mounted on the chairplate as shown above. Finally, the whole trackbed is superelevated on the outside of the curve.

Track on tight curves tends to wear out faster, and the low rail between Union and King had reached the point where replacement was required for safe operation. The difference between the standard rail profile and the track actually in service is shown below. Note how the track is not only worn, but deformed from its original shape. 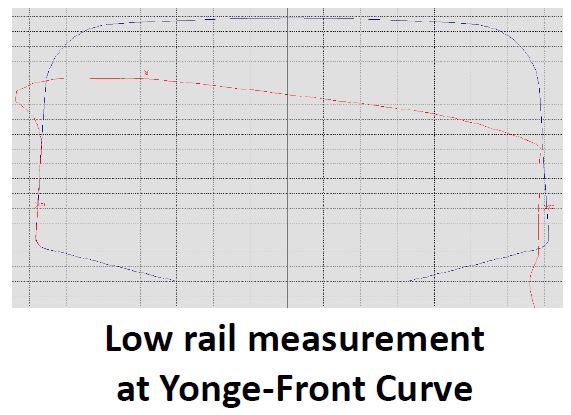 When the TTC began to remove the old rail, they discovered that many of the chairplates were damaged and, therefore, the restraining rail was not properly supported. A failure of this track would cause a derailment. 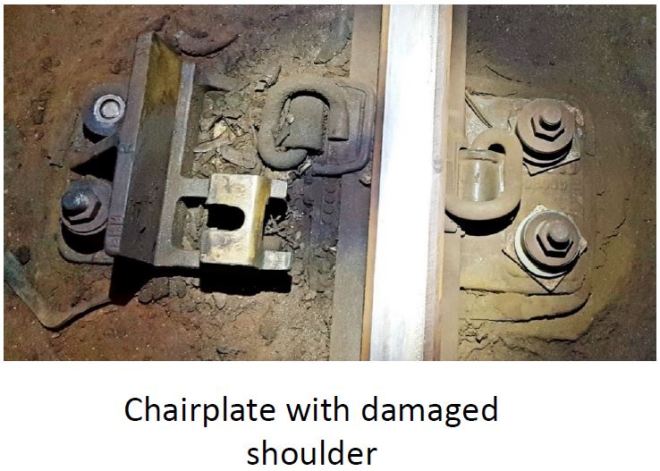 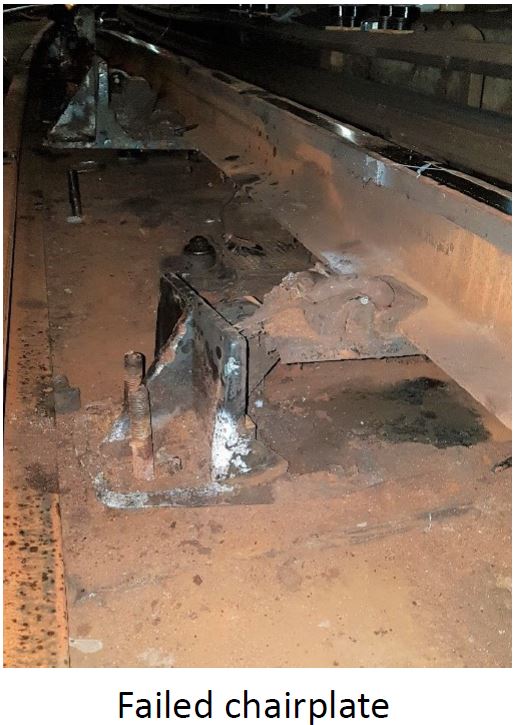 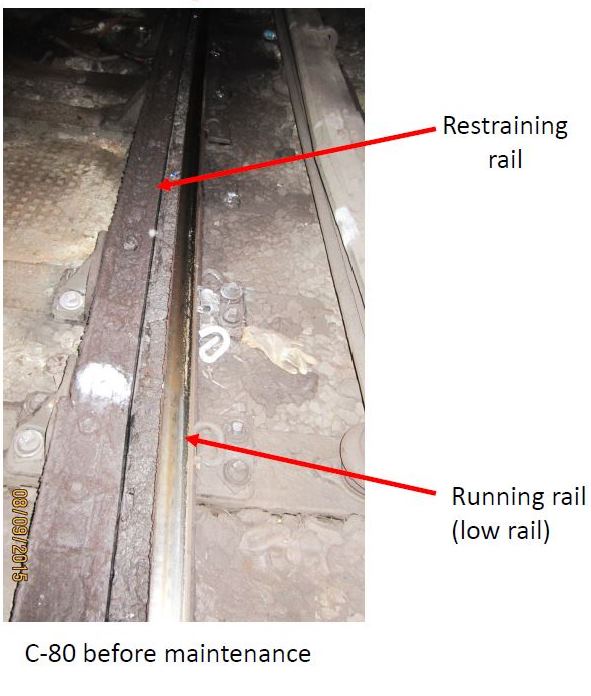 The next photo shows the new running rail in place, new chairplates, and the restraining rail sitting to the left waiting for installation.

Sept. 23, 2020: The article reviewing the Ontario Line Environmental Conditions report has been updated with comments on the downtown section of the proposed route.