This article continues my examination of the TTC’s 2019 Operating Budget which began with a review of the proposed fare increase.

Understanding the budget can be challenging because it presents the TTC’s status in a manner that does not directly align with actual experience. Every year, the new budget is prepared showing the changes from the previous one, but in fact operations during any year rarely produce the budgeted numbers by year-end.

Factors such as shifts in energy prices, unexpected changes in labour legislation, and extraordinarily bad weather can combine to throw off the final results. Depending on circumstances, this can have various results.

On a total budget of $1.9 billion, a few percent one way or another is to be expected. However, two percent, or $38 million, is equivalent to more than 1% on the property tax if this were a shortfall to be covered by the City. A further problem is that from the Council’s point of view, only the “net” budget matters because that is the part which the City pays for. This magnifies swings in the budget so that a 1% change at the gross level becomes a 3% change at the net level assuming other revenue (mainly fares) comes in as expected. By year-end, any shortfall cannot be made up from the farebox, and the City would have to absorb it all.

This budgetary math creates a situation where there is strong pressure to keep the subsidy requirements below budget and, ideally, to “give back” unused subsidy to address other City funding requirements. The TTC may aim to improve service and operate according to standards, but this is all “subject to budget”.

These are budget-to-budget numbers and they show a 3% increase in the requested subsidy from $741 million to $763 million. The “conventional” system goes up by $25 million, but this is offset by a reduction in the Wheel-Trans subsidy caused by lower-than-projected growth during 2018 relative to the budget.

Some context for the 2018 numbers is available in the CFO’s Financial Update for the third quarter of 2018. Although revenue is lower than projected, expenses are even lower requiring less subsidy than the budget foresaw. This will eliminate the draw from the Stabilization Reserve leaving these funds available for use in the 2019 budget. 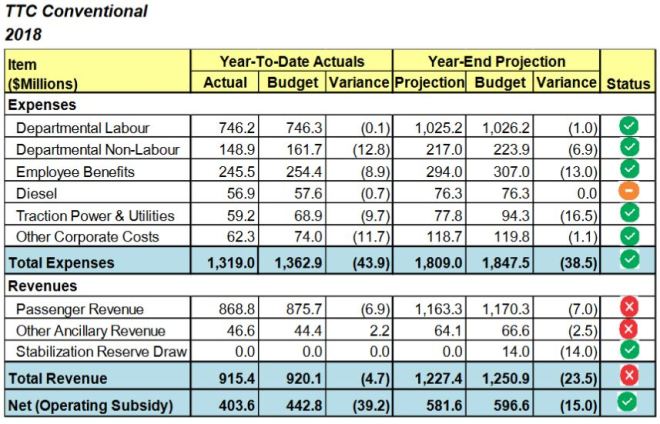 The TTC’s goal is to preserve improvements that affect customer service, and this is achieved by whittling away at expenses behind the scenes. “Efficiency” is always a watchword, but there is a point where there is nothing left to cut without harm to the organization. In 2019, the TTC has again managed to find cost savings, although some of these have external causes and/or are one time changes that cannot be sustained in future budgets.

Through all of this, there is only minimal discussion of service improvements simply to keep up with the Board-approved Service Standards.

As I reported previously, the TTC’s scheduled service on the bus network only increased from 1,560 to 1,582 vehicles between the November-December 2017 schedules and their 2018 equivalent. The Express Bus Network added about 30 buses to affected routes, but this means that service elsewhere at best held steady.

The January 2019 CEO’s Report shows that the TTC is attempting to address overcrowding and has made some progress since 2017, at least on paper.

Riders in the real world might beg to differ, especially in recent days where system reliability coupled with increased demand has given transit a very black eye.

The TTC’s Service Budget includes provision for a roughly 2.8% increase in 2019.

Although the TTC reports on route reliability, the most recent report is for August 2018. This measures “on time departures” from terminals which do not represent the service most riders see along major routes. As I have discussed in other articles, the “standard” which is measured has so much slack in it than the bunched service commonly seen by riders falls within the allowable “on time” standard.

If the TTC is going to improve its credibility with riders, not to mention get better utilization out of its fleet, it must address service reliability by doing more than reporting a meaningless index.

As for crowding, the TTC has not published route-level riding and crowding statistics for a few years, and there is no tracking data to show the state of the system.

Construction of the 2019 Budget

Some 2018 improvements affect the 2019 budget because they must now be funded for a full year. These include the two-hour transfer, new express buses and other service changes. The continued Presto rollout brings added cost from administrative fees, but these have not yet been substantially offset by reductions in legacy TTC fare collection costs. The need for better fare enforcement brings a new cos in 2019 that was not factored into the original Presto project. Other factors contribute to rising overall costs.

Although the diesel bus fleet has become more energy efficient with the retirement of older vehicles, the projected cost of fuel more than offsets this saving.

The Eglinton Crosstown project requires a substantial amount of supplementary bus service for which the TTC is not being reimbursed by Metrolinx. If this were a TTC capital project, the cost of supplementary service would be included in the project budget, but this was not done for Crosstown which is a provincial project. The TTC hopes to recoup this cost from Metrolinx, but until they do, this is carried as a cost on the TTC books. (This is an example of a large expense that could simply vanish if Queen’s Park decides to reimburse the TTC for it outside of the regular subsidy payments.)

The TTC proposes to offset the $96.4 million requirement in a variety of ways including reductions to current spending ($48.8m), a fare increase ($25.6m) and increased subsidy ($22m).

This $96.4 million is considerably lower than the total “opening pressure” in the budget process when the initial version was created mid-way through 2018. 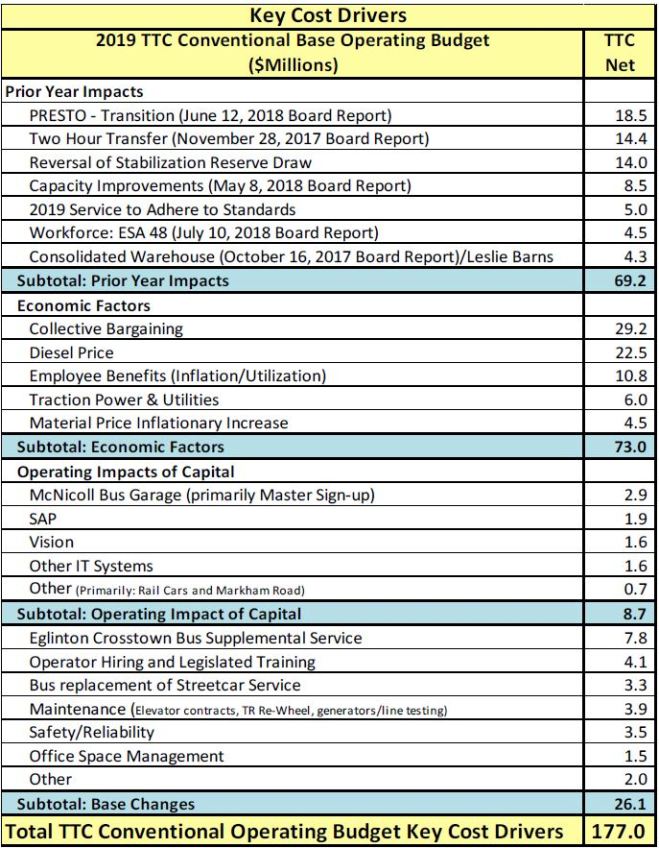 Over half of this is offset by various projected changes. These cannot be called “savings” because some reflect budget adjustments based on actual 2018 experience, and some are one-time draws from City reserve funds. 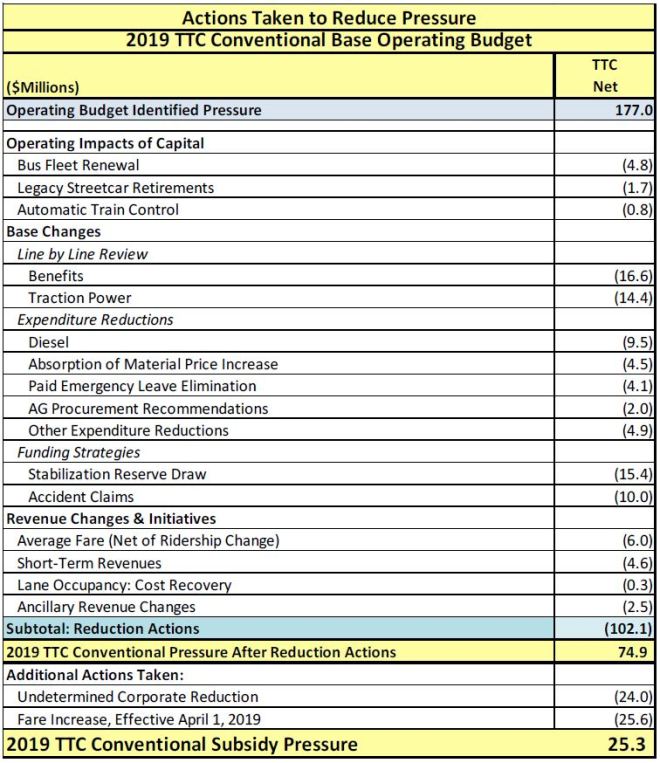 This table includes a few substantial reductions compared to the original budget. The largest is a reduction in benefit costs that began in 2018 with the effect of prosecutions for benefit fraud, and a further cost reduction against the original budget is expected in 2019. Although the original budget for benefits went up by $10.8 million, this is more than offset by a reduction of $16.6 million in the revised budget for a net cut of $5.8 million. This pattern is unlikely to continue into future years as the effect of more stringent benefit claims handling will have worked its way through the organization.

Both traction power and diesel fuel are expected to come in well below the original budget figures based on actual 2018 experience, projections for 2019 and diesel fuel hedging contracts that have already locked in fuel costs for a about half of the 2019 requirement. An originally projected $22.5 million increase in diesel costs is reduced to $13 million in the revised budget.

Two draws against reserves total $25.4 million. Although these are shown in the overall budget as “revenue”, they are another form of City subsidy.

The Stabilization Reserve contains money from prior year underspending. A draw from this reserve has been included in recent TTC budgets, but because each year came in better than expected, the draw was not actually exercised. If this draw actually occurs in 2019, there will be no reserve left to fund an operating shortfall in 2020.

The Accident Claims reserve is funded by the City with a fixed amount each year, and the TTC draws on it as needed to supplement its own provision for claims. The intent is to flatten out the effects of large claims on year-to-year funding needs. In 2019 the TTC proposes to take $10 million from this reserve because their draws on it have been lower than expected, and they would continue this in 2020 and 2021. This is, in effect, an addition to City subsidy via another route. Whether this source can be used indefinitely depends on TTC claims experience.

On the revenue side, the TTC expects to receive about $6 million more in fare revenue (assuming no fare increase) because riders are paying a higher average fare. This is caused by more fares coming in at the single “token” rate via Presto rather than at the bulk discount of Metropasses. This will be offset by the cost of 70 new fare enforcement staff.

Short-term revenues include leasing of the site of the future Kipling Yard to an existing occupant, but this is expected to end by 2021.

Lane occupancy cost recovery refers to a proposal that the City bill projects that occupy road space for the cost of transit service adjustments. Whether this will actually happen remains to be seen, but in any event the amount is quite small in the 2019 budget.

The Undetermined Corporate Reduction includes many hoped-for savings in various line items of which the largest is the recovery of $7.8 million in Crosstown related service costs. If Metrolinx does not pay this, then a substantial hole will exist in the TTC budget. In summary, the TTC is hoping that many possible cost adjustments will break in their favour. The table below is a scenario of how they might achieve an overall $24 million reduction. Note that it is not definitive, but is intended as an example of how this might be achieved. Appendix D of the budget discusses some of the risks inherent in achieving these savings. 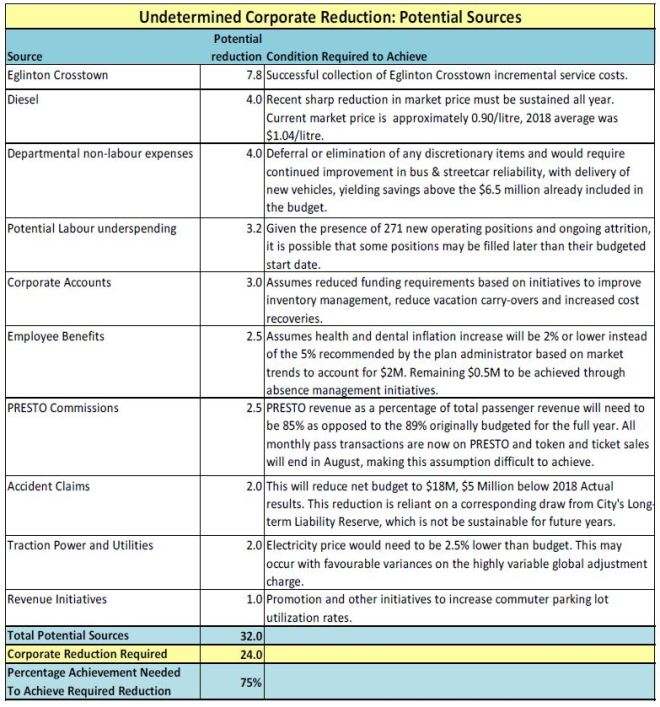 There is a common thread through much of the budgetary juggling. Many tactics used to hold down the size of the subsidy increase will be one-time changes that cannot be counted on in 2020, or even worse, are one-time revenue sources that will have to be replaced. This kind of budgeting may get Council through another year, but there are only so many rabbits in the magician’s hat to solve TTC budget woes, or at least to distract the audience from understanding just how deep a problem the City will face.