The TTC’s Operating Budget and a proposed fare increase will be considered by its Board on January 24, and subsequently by Council through its budget process. Management recommends a ten cent increase in the adult and senior/student fares with proportionate increases in multiple fare media (passes or their equivalent on Presto).

The new fares are projected to generate $25.6 million in revenue the TTC otherwise would not get for the nine months from April 1 (when they would go into effect) through year-end. The TTC is also seeking $22.0 million in additional City subsidy to cover costs, many of which were already mandated by Council, that only existed for part 2018.

Working through the Operating Budget is always a challenge not least because the numbers are presented on a budget-to-budget basis with little reference to actual results. What typically happens each year is that if a shortfall by year-end is foreseen, expenses will be cut back to fit the available funding. Conversely, results can be better than expected and the TTC winds up with a “surplus” which is really a lower subsidy draw than budgeted.

Unexpected costs and savings can occur for a variety of factors including changes in pricing versus initial estimates (common for energy costs), legislative changes affecting employee working conditions and benefits, ridership above or below forecast, and a mix of fare revenue that yields a different average fare per ride. Collectively, these amounts can range above $100 million and many of them are not under the TTC’s direct control. Council, however, is terrified by even a $10 million extra call on subsidies because this represents roughly a 1/3% property tax increase. Ideally (for the politicians), the TTC should come in under budget and thereby “save” money versus original subsidy projections.

I will explore the TTC’s costs and revenues in the second half of this article, but for now the question on everyone’s mind: fares.

To save everyone asking, yes, I support the fare increase, but with some caveats discussed later in this article.

For many years there has been a call for the TTC to return to a 2/3 farebox, 1/3 subsidy ratio as a “fair” balance between riders and government support. In the 2019 proposed budget, fares will cover 62.6% of total expenses, and a further 3.7% will come from miscellaneous revenue such as advertising.

There is a basic problem with picking any target as the “ideal” farebox:subsidy ratio. If policies such as fare freezes drive the ratio down, there will be “relief” for riders in the short term, but eventually one will reach the new plateau and be faced with annual increases. One cannot simply keep moving the goalposts especially when better service and system capacity are important to the transit system’s credibility.

The table below is taken from the TTC’s 2019 Operating Budget report. 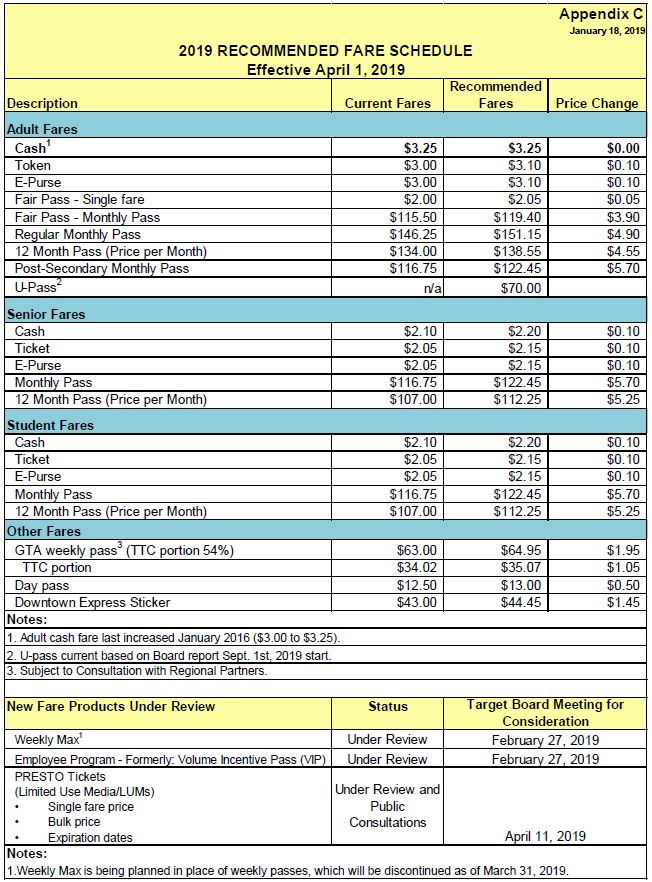 The single fares for both adults and seniors/students will rise by ten cents, and so there is a higher percentage increase on the concession fares than those for adults. The various classes of passes go up by roughly ten cents times the existing “fare multiple” versus single fares. For example, a regular monthly pass is $146.25, or 48.75 times the $3 single fare. The pass goes up by $4.90, or 49 time ten cents. Other passes shift by their respective fare multiples.

Fare increases are often criticized as hurting those who cannot afford to ride transit and this is part of a larger issue with poverty in Toronto. Toronto has a “Fair Pass” program which provides a discounted pass to those who qualify, although the list in the current phase of this project is quite restrictive. The three phases proposed in 2016 were:

The estimated cost of this program was

There is no indication of whether the second and third phases will be funded by the City although statements by the Mayor imply that programs already in the works would be funded for 2019. The bigger jump will come next year.

The TTC and the City face difficult choices about expenses and revenues, but this should not stop them from looking beyond current approvals.

The shift to electronic media will continue this year as various existing formats are phased out. I clarified some issues with Heather Brown at the TTC, and her replies are quoted below.

Cash fares will continue to be accepted on buses and on the older streetcars pending their retirement, and in subway stations where there is a farebox available.

“Once we no longer have fare boxes at those stations / across the system, customers wishing to pay buy cash will need to purchase a PRESTO Ticket. Those customers who want to continue to pay the concession fare should switch to a PRESTO card and set their card to deduct a youth/senior fare.”

Someone who pays cash into a farebox will need a receipt that is capable of being read by fare gates for connections at locations that do not have a closed transfer connection (e.g. Dufferin Station) and this would also apply to cases where buses are substituted on routes normally served by new streetcars with fare vending machines.

“Customers will be provided with a product that will open the fare gates. We’re still looking into what this option will be.”

Fares paid by cash will not be eligible for the two-hour transfer privilege.

“Customers who pay by cash aren’t eligible for a timed transfer. The transfer rules for those customers paying by cash will remain as they are today, a one-way continuous trip, with no stopovers, within a reasonable amount of time. Customers who require transfers on a streetcar, after the C/ALRVs retire must pay at the Fares and Transfers Machine and obtain their transfer from there, as they do today on the low-floor vehicles.”

The arrangements for cash fares still do not address how someone with a paper fare receipt such as that issued on a streetcar will access a subway station, especially if the transfer rules enforce only “official” transfer locations and a car is on diversion, a common situation downtown.

The question of regional fare integration has fallen into a black hole ever since the ascension of the Ford government at Queen’s Park and the repudiation of the previous government’s spending promises. These included a $1.50 discount for cross-border trips for adult single fare payers using Presto, as well as lower fares for short distance trips on GO Transit. What, if any, part of this will be implemented will probably have to wait at least for the provincial budget in March 2019.

That discount, of course, was flawed in that it was not available to those who travelled using a pass, only single fare riders, and the GO+TTC cofare already in place offers a much smaller discount for seniors and students than for adults.

There has been no public discussion of integrating fares so that, for example, a “two hour fare” ignores the boundaries between all local transit systems.

All of this is further complicated by Queen’s Park’s planned “subway upload” and the as-yet unknown financial arrangements for operations and maintenance of the system.