This article continues the analysis of transit vehicle speeds on King and Queen Streets downtown over the past two years. The first installment of the article compared travel times between the vehicles on each street at specific times of the day and periods over the course of two years. Here, the same data are arranged to show the evolution of travel times on each street over time both before and after the implementation of the King Street Pilot.

Here is a sample chart showing King Street westbound in the hour from 8 to 9 am.

As this is westbound data, the chart is read from left to right. A common pattern that shows up here is the different location of low speeds corresponding to stops once the pilot is active with “before” data dipping ahead of the intersection, and “after” data dipping following. The degree to which “after” data also includes a nearside dip indicates how traffic signals can compound the stop service time with farside stops. Note especially the green line which shows data from before the re-activation of Transit Signal Priority (TSP). At Jarvis, for example, there is a decided reduction in nearside delay comparing the blue (July 2018) and purple (October) lines with the green (January) one. There is also an improvement at York Street and at University Avenue.

By early afternoon, the speed profile has changed somewhat. The “before” data generally hangs below the “after” although some of this is due to the offset in stopping patterns.

By the afternoon peak hour, the faster speed of the “after” pilot data is quite clear. Note how the data lines converge west of Bathurst where there was no change between the two periods.

It is worth mentioning here the orange line (November 2017, just before the pilot) which has the lowest values of all. This corresponds to a period when some construction on King, including the installation of new barriers for the pilot, was underway in the westbound curb lane. Data from this period should be used with care as a comparator to the pilot itself because it may not represent typical pre-pilot conditions.

Early evening continues to show a benefit for the pilot configuration, but particularly west of the financial district. It is important to think of the pilot as the entire area from Bathurst to Jarvis, not simply as the traditional “King and Bay” financial centre. 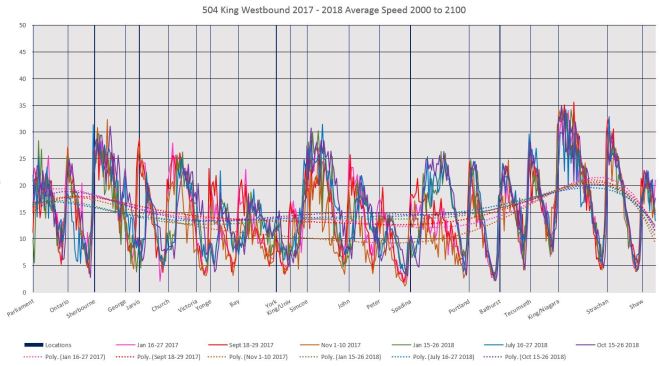 Eastbound data for King show similar patterns to westbound. Note that these charts should be read right-to-left.

In the AM peak hour, the data remain clustered together until just west of Bathurst when an improvement appears in the blue and purple lines corresponding to July and October 2018. These data follow a point where the signal eastbound at Bathurst was adjusted to better clear eastbound traffic which is all forced to turn at this location. Here and across the route to Jarvis, the stop locations shift to the nearside although some nearside delays remain. Spadina, for example, improves, but the delay due to the farside stop is roughly the same as the delay due to the signal on the near (west) side of the intersection.

One effect of the farside stops is that where the following major intersection is close by, cars do not get up to as fast a speed as they did from a nearside stop because they have less distance to travel. This is particularly noticeable eastbound from Yonge to Church. 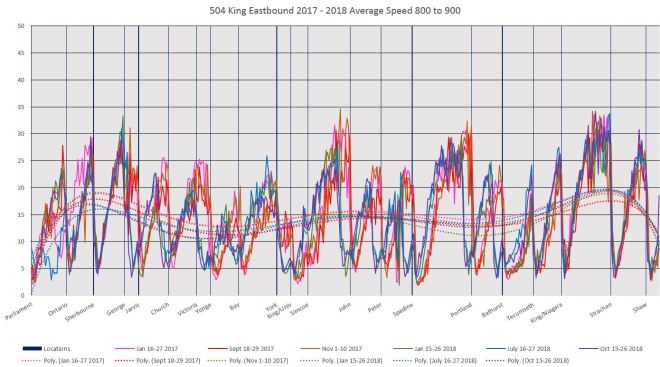 The transition to daytime service is notable for the change in conditions west of University Avenue. In the pre-pilot era, there was a marked drop in average speed from John to Simcoe because off-peak parking conditions kicked in while traffic volumes on King caused queuing, This disappears after the pilot is active because, even without a curb lane, the traffic volume on King has been so greatly reduced.

In the early afternoon, the same pattern as we saw above with pre-pilot data generally below the post-pilot data appears.

By the PM peak hour, the post-pilot data show a clear advantage through the entertainment and financial districts. 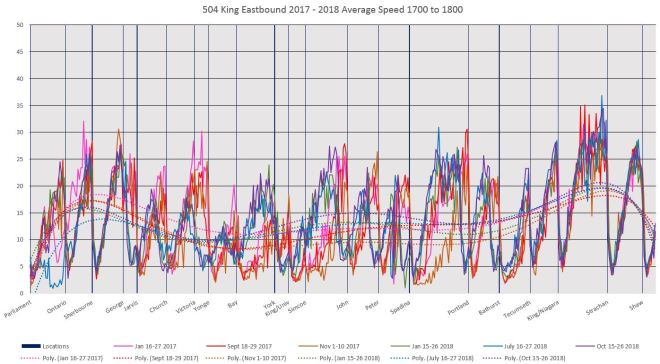 As with the westbound data, the pilot configuration continues to show an advantage into the evening, although not as strongly as in the peak.

The full hour-by-hour sets of charts for King Street are here:

One of the questions to be studied during the pilot period was whether a spillover effect from King would interfere with Queen car operations and thereby undo the benefits viewed overall for the two streets.

In the AM peak hour, there is no clear “winner” for the pre- and post-pilot periods with both showing better speeds in some locations.

The midday data shows values that are quite similar across all dates, and the trendlines lie on top of each other for much of the chart. 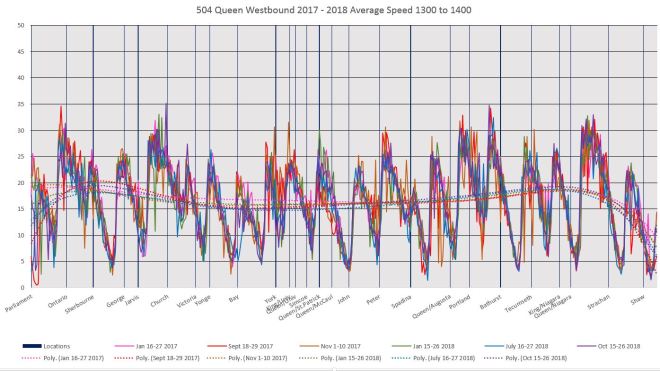 Although peak period speeds are slower than the midday, they have similar values for both the pre- and post-pilot periods. There is one notable exception westbound from Bay to York, but this is a seasonal effect where the pink (January 2017) and green (January 2018) values reflect the absence of the activities in front of City Hall that add to traffic congestion in this area. An operational change visible here is the shift of the stop westbound at Simcoe to St. Patrick Street in mid-2018.

Early evening times are similar for all months across this area. As on earlier charts, the trendlines are closely spaced. 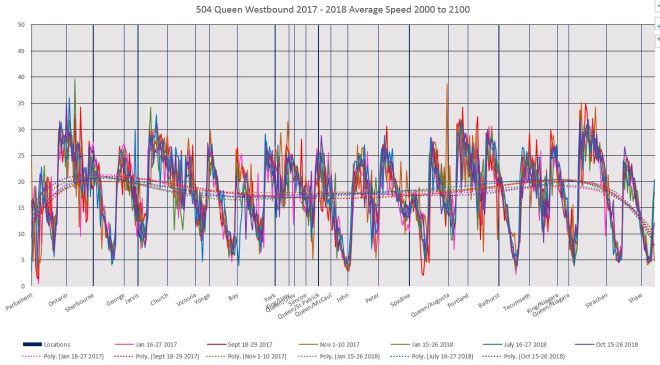 AM peak data eastbound are generally similar, with the notable exception of fall 2017 when September (red) has some instances of slower operations.

Midday eastbound data show a drop in speed between Bathurst and Spadina starting in the July and October 2018 post-pilot data (blue and purple), but not during January (green).

PM Peak data are quite similar. While there are a few locations where values for different months spread out, these are not grouped into “pre” and “post” bundles as we saw on King Street implying that the causes are not related to the pilot. 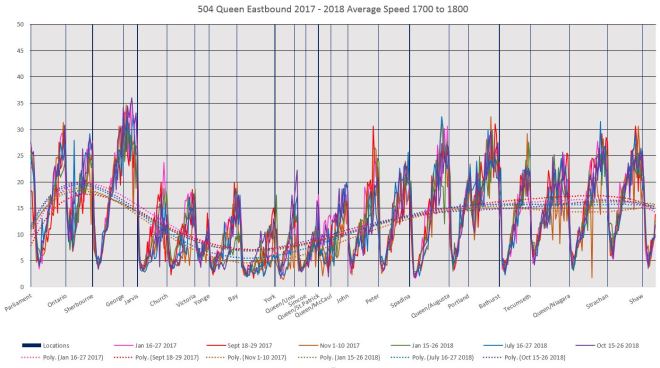 Early evening shows a decline in speeds in the Bathurst to Spadina segment, parallel to the entertainment district on King, in 2018. This is most pronounced in July when traffic in that area would be at its heaviest. 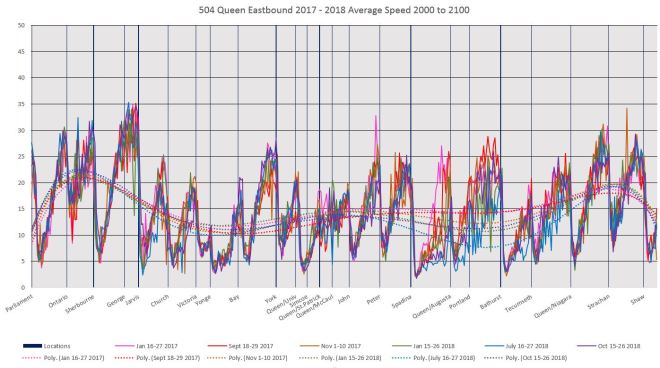 The hour-by-hour chart sets for Queen are here: