Updated December 2, 2018 at 8:00 am: A sixth set of charts has been added covering the last two full weeks of September 2017. The intent is to show fall conditions before the pilot, but also before construction on King (at least some of which was to set up the pilot itself) slowed King cars in the early November 2017 data already published here.

With a year’s worth of the King Street Pilot now behind us, attention turns to two basic questions: should King Street remain as it is with a degree of priority for transit, cyclists and pedestrians; and should this scheme be extended to other major streets, notably Queen Street.

In previous articles I have reviewed the behaviour of the King and Queen routes:

This article provides a detailed look at average weekday speeds along the streets during six separate periods, and with hourly breakdowns from 6 am to 1 am.

This gives a view of “normal” conditions, but does not capture all of the seasonal and special event variations, many of which are evident in the data in previous articles. The periods have been chosen to avoid skewing the numbers with special events such as TIFF, vacation periods and construction.

A Caveat About “Average Speed”

The values show in these charts are derived from TTC vehicle tracking data. This originates in GPS format, and after cleaning up the “rogue” points that are off route due to GPS errors, what is left is mapped onto a version of the route broken into 10m segments. The speed of a vehicle at each segment is determined by the “before” and “after” locations of adjacent GPS observations and the time difference (usually 20 seconds) between them.

The Effect on Riders

Vehicle speeds on Queen are often comparable to those on King, but Queen is notorious for less frequent, unreliable and crowded service. Riders are very sensitive to waiting times at stops, and this is compounded if they cannot board the first vehicle to appear, let alone if they walk some distance without a streetcar ever passing them.

With the King Street Pilot there has been a reduction in the variability in travel times which has led to less irregular service. Scheduled service comes more often and the line’s capacity has been improved with new streetcars. Speed alone is not the only measure of a service improvement.

It is vital that debates about the effectiveness of changes to King are debated not just on speed but also on reliability and capacity for demand. The early focus on speed changes which were, in some cases, unimpressive, opened the field to critics who argued that there was a great upheaval for little benefit. It is the combination of more reliable travel time, increased speed, reliability and capacity that has affected the riding experience and drawn more people to use this route. Any move to expand either the scope on King or to another street must take all of these factors into account.

Each chart contains data for one hour’s operation in one direction. Here is a sample from the PM peak westbound in October 2018: 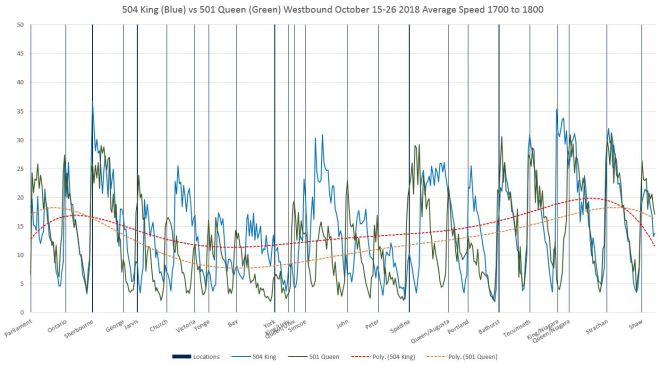 The limits of the chart are east to Parliament and west to Shaw, both beyond the Jarvis-Bathurst pilot, for a few reasons:

Queen and King run parallel to each other with most north-south streets at the same location on both. This allows data from the two routes to be lined up on a single chart. A few notes about special cases:

Comments on the details of these charts are included later in the article.

Much comment arose from critics of the King Street Pilot because there was so little change in travel times during the AM peak. This arose from a few factors:

In January 2017, all of the stops on King were nearside, and so the dips in speeds on Queen and King line up. During the peak hour, Queen has the advantage just west of Sherbourne while King does better from Church to Yonge (there is no Victoria stop or traffic signal on King) and west of University Avenue. 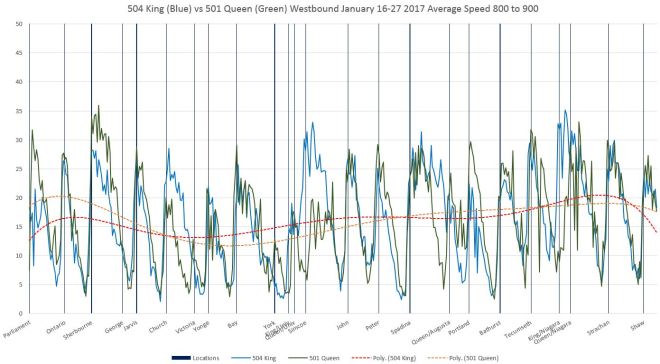 In September 2017, King consistently betters Queen in part because speeds on Queen have dropped.

In November 2017, King falls below Queen west of John and this relative standing remains even after the pilot begins.

In January 2018, the effect of streetcars being forced to stop both nearside and farside shows up as a double-dip for King at its stops at Jarvis, Church, Yonge, Bay, University, John, Peter and Spadina.

In July 2018, the double-dip problem is reduced at Jarvis, Bay, York (not a carstop, but previously a location where streetcars were caught by red signals), John and Peter.

The reduction in double-dips for King continues into the fall of 2018. An important distinction here (and in other charts) is that King’s performance has been improved relative to Queen (compare the location of the red and yellow trend lines in January 2017 with those in October 2018).

January 2017 sees the eastbound service running slower on King until Spadina, then picking up to Yonge mainly because of the better speed from John to University, and then roughly paralleling Queen from Yonge eastward. King is particularly affected by congestion west of Bathurst, although this condition lessens in 2018 following changes to signal timings at Bathurst..

In September 2017, Queen has fallen quite dramatically compared to King east of Yonge and west of John Street.

By November 2017, the trend line for Queen west of John has improved from September values.

In January 2018 with the pilot in place, the effects of double-stops on King are visible at Bathurst, Spadina, University, Yonge, Church and Jarvis. Queen’s trendline east of Yonge has improved because whatever effect caused delays from Yonge to Church has disappeared. Meanwhile, King’s trendline has fallen because it no longer makes as good speeds (as pre-pilot) after leaving farside stops at Yonge, Church and Jarvis. In various places west of Yonge, improvements in King speeds compared with Queen are visible.

From this point onward, Queen’s trendline east of Church sits higher than King’s because of (a) the farside stops on King and (b) the fast running on Queen particularly east of Jarvis at Moss Park.

By July 2018, double-stopping effects have been reduced eastbound at Church and at Jarvis

The summer pattern continues into the October 2018 data.

By early afternoon, congestion effects begin to set in, and the relative performance of the two streets changes, especially once the pilot is underway.

In January 2017 and, to a lesser extent, in November 2017 speeds on King are slightly better than on Queen, but between University and Spadina, Queen wins out. 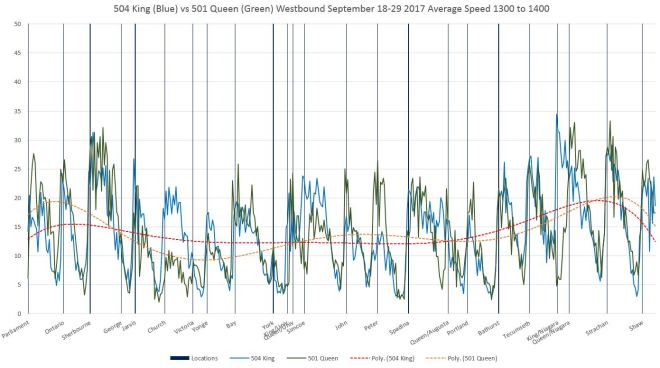 In January 2018, with the pilot in place, King’s improvement is mainly in the Entertainment District west of Simcoe. This pattern continues into the summer.

In October 2018, King is doing consistently better, although this is mainly due to a decline in Queen Street speeds between University and Bathurst.

Before the pilot, King and Queen run at close to the same speeds with some variation along the routes eastbound during the midday. As with westbound data, King values lie below Queen west of University Avenue. 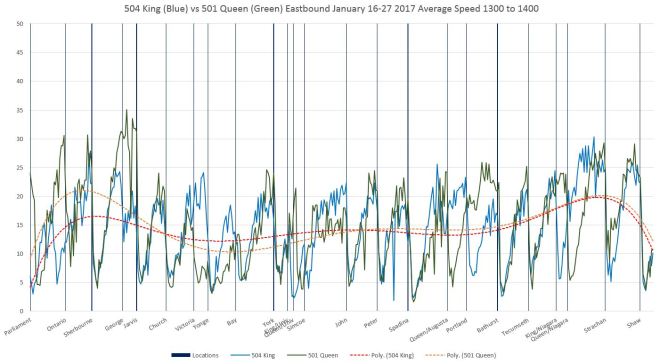 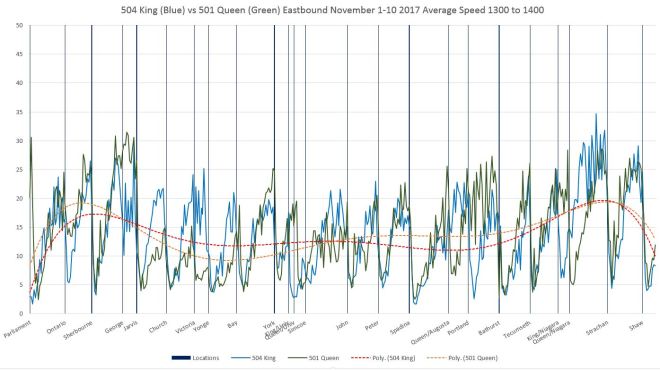 After the pilot begins, King’s performance improves west of University, but actually declines further east mainly due to double-stopping delays.

By July, King’s relative standing has improved through a combination of slower speed on Queen west of University and faster King speeds from there to the east. 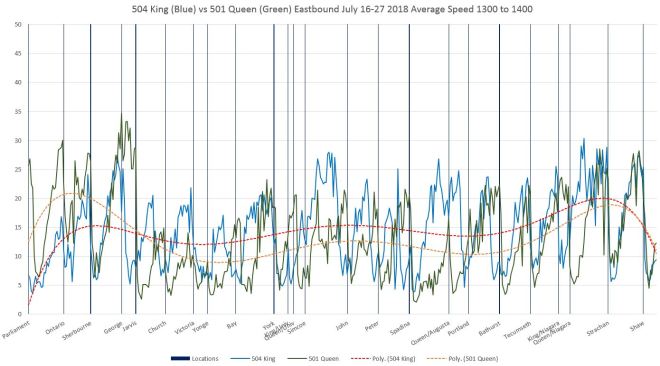 In October 2018, King has lost a bit of ground due to slower operation east of Yonge due in part to construction affecting the eastbound curb lane.

Before the pilot began, King’s suffered from congestion delays westbound to Spadina as well as slower operation east of Bathurst compared to Queen Street. These conditions change once the pilot is operating (see January 2018 and later). Queen, for all if its problems with service reliability and capacity, was the faster route once it crossed University Avenue.

Conditions on King are particularly bad in early November 2017 thanks to construction. 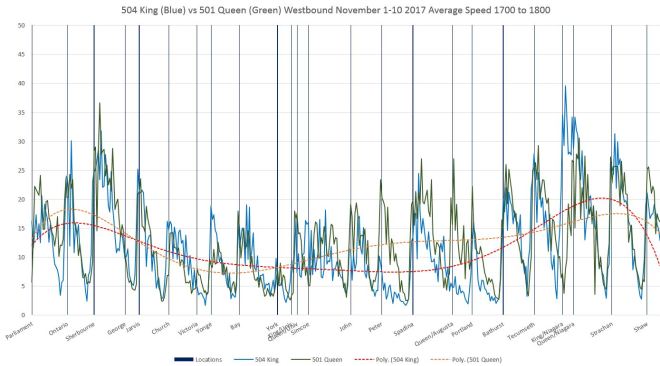 With the pilot in operation, King’s performance improves and is considerably faster across the pilot area. The data here are consistent with other reports that there has been a big improvement in travel times during the PM peak.

King’s performance gains continue into the summer of 2018 including the reduction of some double-stopping effects seen in the January data above.

In October 2018, the speed on Queen west of University declines giving King a stronger lead.

Queen has always been quite slow eastbound through the core and this extends from west of University over to Yonge Street. Pre-pilot, King has the advantage in this area, while Queen does better west of Spadina. 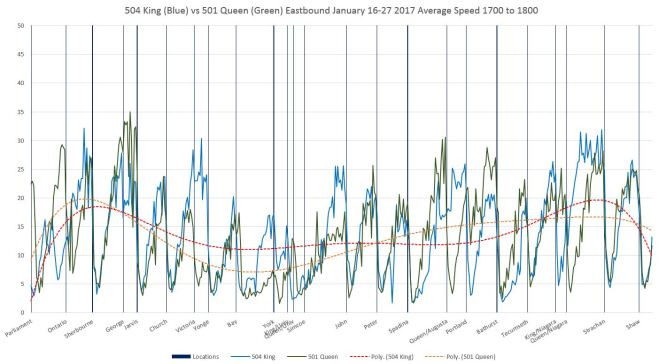 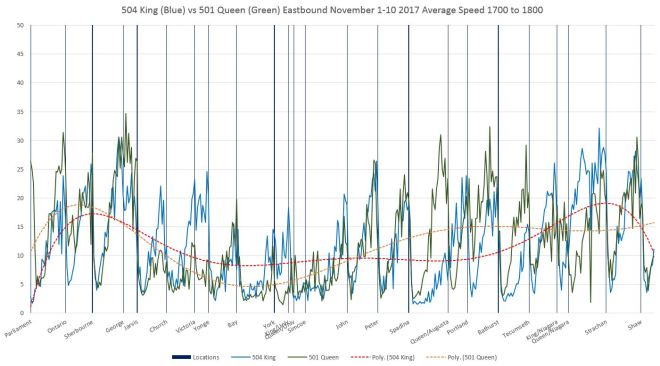 With the pilot in place, King’s performance improves in places.

In July 2018, Queen is particulary bad in the core. This is a seasonal issue where a congested area gets even worse. Note in the October 2018 chart how Queen’s speed picks up again around Bay Street.

Compared with January 2018, eastbound double stop problems have been reduced at some locations.

Late evening service on King was regularly delayed through the Entertainment district by a combination of post-show traffic on most days, and club traffic on the weekends. This has improved with the pilot configuration, although moreso in the westbound than the eastbound direction. The main area for delays is also shifting westward from the theatre district east of Spadina to the new club district between Spadina and Bathurst.

Note that these data include all weekdays and so the effect of particularly severe congestion late in the week is less evident in these charts than those in previous articles showing a regular “heartbeat” spike in travel times for King and, to a lesser extent, Queen. The improvement with the pilot configuration on King is particularly good, but in these charts this is muted by inclusion of days where the club district is not a problem for transit vehicles. 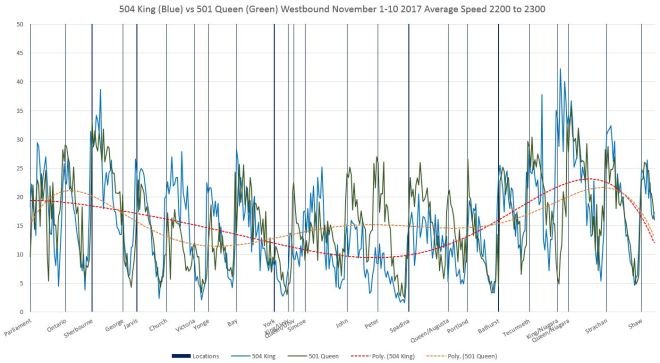 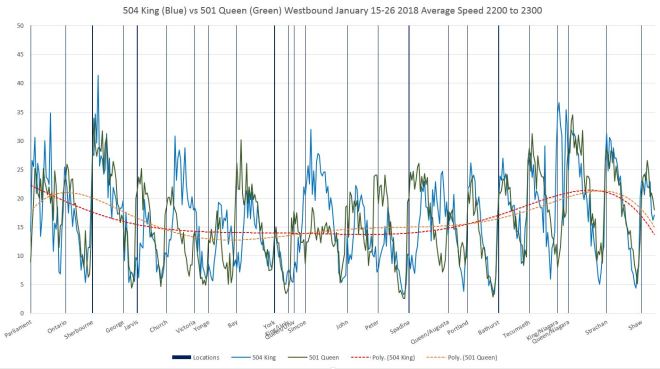 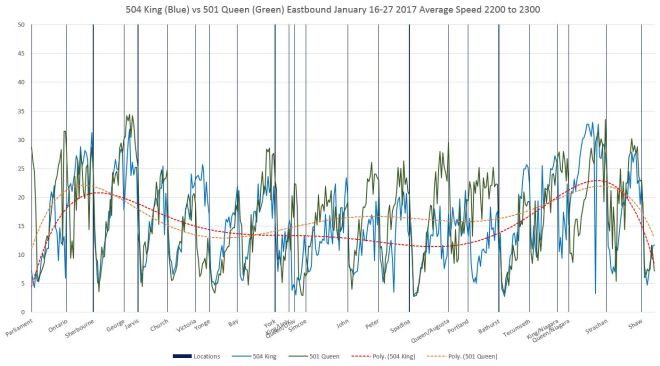 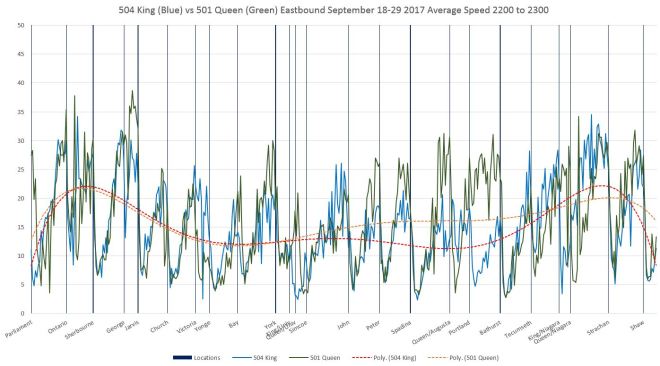 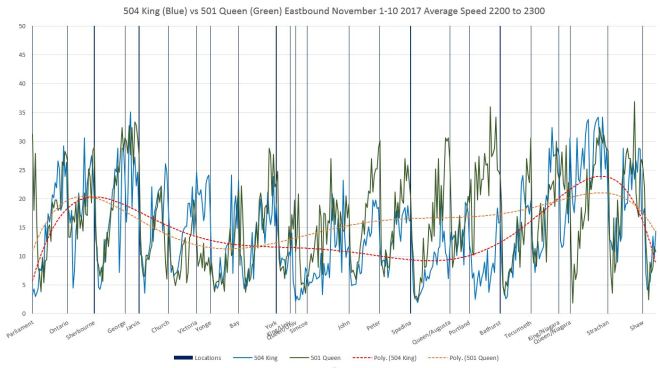 Each PDF linked here contains 20 pages, one for each hour from 6 am to 1 am. Paging through a file (as opposed to scrolling) will show the evolution of values over the day in the manner of flip chart animation.