In May 1980, the TTC introduced the Metropass giving riders the option of paying a flat fare for one month of unlimited travel. Management had resisted the idea of a pass with the classic “it won’t work here” argument. Toronto was finally embarrassed into implementing a pass when Hamilton (a working-class burg at the west end of Lake Ontario always seen as inferior to Toronto) brought in a pass. The idea that passes were some sort of unintelligible, unenforceable foreign scheme collapsed under its own stupidity.

The TTC was really fighting the idea that riders should get a discount for using transit more. For decades afterward Metropasses became the workhorse of TTC fares, the idea persisted that passholders were freeloaders on the system. This attitude continues to infect debates over flat fares versus distance or zone-based ones when the real issue is to get more people out of cars and onto transit. “Paying your fair share” rarely includes the avoided cost of building and operating a road network, let alone the economic benefits of a mobile population.

It is ironic that GO Transit, founded in 1967, was established on the premise that carrying people on trains avoided massive expressway construction as well as the personal cost and time of driving into the city. This was a rare time when the cost of providing transit was seen as a way of avoiding the much higher cost (in dollars, physical upheaval and the inevitable future congestion) of continued road-building. Debates over transit funding, fares and service have rarely been this enlightened.

The Metropass now becomes part of TTC fare history with its replacement by Presto.

Metrolinx should have begun the migration years ago to “open payment” (accepting any media), but the government and management of the day preferred to hobble along with their existing structure and attempt to fit new functionalities into a “next generation” of Presto. They are now experimenting with a smart phone app providing equivalent functions to their card, and talk openly of a move away from a proprietary card to the use of any identification system such as a credit card or app. This will require a complete rethink of Presto’s “back office” functions, but will bring much more flexibility in fare plans and billing if the political will ever exists to implement this.

The problem of pricing and of fares generally is much more than a technology issue although both the limitations and potential of electronic fare collection have been used to argue for and against various schemes. Incentives and barriers to transit use exist in the tariff region-wide, but changes have much more to do with the eternal question “who pays” rather than the fare technology. Years ago, Toronto abolished its two-zone fare structure valuing the ability to travel anywhere for one price over the premise that riders between the suburbs and the core should pay more because they “used” more of the transit system. More recently, the move to the “two hour transfer” on Presto recognizes that a transit “trip” legitimately may be broken up in small segments and riders should not be penalized for hop-on, hop-off travel as they have been for over a century.

This post includes a selection of Metropasses over the years. Recently, the Star ran a piece on Nathan Ng who is working on a site to present all of the passes from May 1980 to December 2018 drawing on my own and others’ collections. (He is missing three years in the mid-90s when I was buying annual passes.) Ng’s other sites include Station Fixation which details every station on the TTC system, Historical Maps of Toronto and the invaluable Goad’s Atlas of Toronto — Online! in which one can quickly become lost for hours exploring the city as it once was.

At its debut, the monthly pass was priced at the equivalent of 52 token fares which gave us a $26 pass. This price quickly escalated as the TTC’s fares and finances faced the stresses of the early 1980s. This was a period which saw the first Gulf Oil crisis, and the economic downturn brought an end to a long period of effortless growth of ridership on the TTC. Management had never dealt with a system where riders stopped showing up, and this brought the onset of “adjusting service to meet demand”, a polite way of saying “cutting service to the level we can afford”.

Despite repeated fare freezes as well as shifts in the “multiple” for pass pricing (the number of token fares represented by a pass), the actual price has risen over four decades at a quite uniform rate as the chart below shows. Fast growth in pass prices in the first decade follow the same overall trend through pricing right up to 2018. Each freeze has been followed by a jump in pricing that returns the line to the same slope it has been on since 1980. The price today, at $146.25, is 5.63 times the 1980 price of $26. 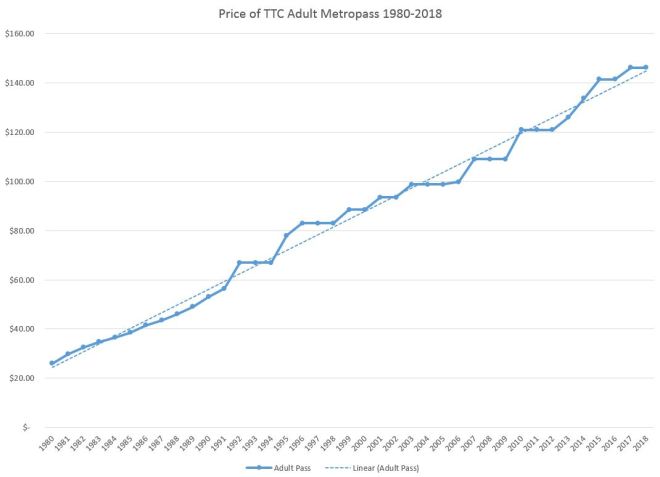