This is a companion piece to my review of service at Long Branch Loop which, for over two years, has been provided by a bus shuttle west of Humber Loop.

Apologies in advance. This is a long read intended for those who are interested in the fine detail of service behaviour over a period when there were many changes in the service design, and where there is a wide variety of reasons for irregular service.

One might assume that with the 501 Queen route shortened, and at times with a separate bus shuttle operating on the east end of the route, service at Neville Loop would be better than with streetcars running all the way from Neville to Long Branch. This is not entirely true, and even some periods of bus service were quite unreliable. There are many days when shuttles ran with vehicles missing or in bunches with no apparent efforts to manage and space the service.

As on the west end of the route, the TTC’s abdication of line management brought irregular headways, large gaps and bunching. A common situation is for a group of cars to leave Roncesvalles eastbound closely spaced, and to continue as a parade across the city. Sometimes, short turns in the east end partly correct this problem, but sometimes the parade simply echoes back across the line. This is not caused by “congestion”, but by the failure to maintain service spacing.

May 8 to December 9, 2016: 501 Queen service diverted via Shaw, King and Spadina for watermain construction.

October 11 to November 18, 2016: Provision for the watermain diversion was removed from the schedule, but cars continued this operation until December 9. Buses replace streetcars between Coxwell and Neville Loop for track work at the loop.

January 8, 2017: Streetcar service cut back to Roncesvalles. Major reconstruction work on The Queensway and on Lake Shore affected 501L bus service from April onward depending on work locations and road restrictions.

Late March 2017: Schedules provided for a diversion via Spadina, King and Shaw, but this was not actually operated.

May 2017: Entire 501 route converted to bus operation for various construction projects. Buses operate from Neville Loop to Long Branch or to Park Lawn Loop in a route design comparable to the merged, pre-2016 streetcar service.

September 2017: Streetcar service restored between Roncesvalles and Connaught (Russell Carhouse) with bus operation from River to Neville due to track construction at Coxwell. Route diverted downtown via King between Church and Spadina due to bridge construction west of Yonge and track work at McCaul.

Streetcars diverted to loop via Broadview, Dundas and Parliament between October 10 and 12 due to construction at Pape. The shuttle bus service was extended westward during this time causing erratic headways on the east end of the route.

October 15, 2017: Streetcar service restored to Neville Loop. 501J shuttle bus service added between Bathurst and Jarvis. Route diverted via Broadview, Dundas and Parliament for repairs to the Don Bridge between October 30 and November 7. 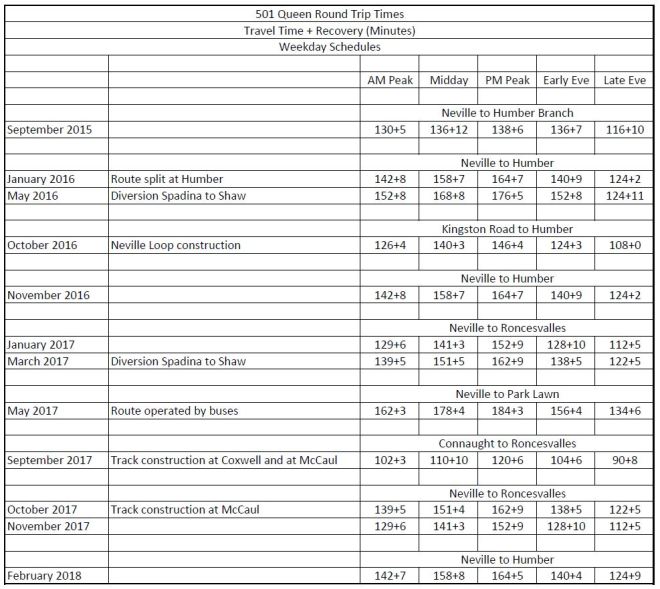 This is probably a good time to mention the value of having a large collection of data so that one can perform a longitudinal study of route behaviour. Individual months, weeks or days do not always convey the types of events, the chronic and one-time problems, or the seasonal variations.

The TTC should have this kind of detailed analysis available as part of its program to measure and report on service quality, reports that have been missing, despite being part of the “Customer Charter”, for three years. Too many performance metrics, to the extent they even exist at the TTC, are summarized a high level masking the real extent of poor service. Queen is supposed to be part of the “Ten Minute Network”, but one would never believe it from actual operating results.

Format of the Charts

These charts are in the same format as in earlier articles where values of headways (the space between cars) or travel times are plotted by percentiles. There are four colours corresponding in increasing proportions of the service:

If service is well-behaved, the green line (50%) should be roughly at the scheduled level of service. If the purple line (25%) is close to the axis (a value near zero), this indicates that about one quarter of the service is running in bunches on very short headways. When the red line (100%) spikes up, especially when there is a lot of room between it and the green line, up to half of the service is running at extended, and probably unreliable headways.

Service through the fall of 2015 settles down to a fairly consistent pattern after September. There are a few major interruptions that show up in the data, but also wide headways that are simply the result of short-turning cars at Woodbine Loop, or of poor service management eastbound across the route. A common problem was with the mix of Long Branch and Humber services where the proper blending of inbound service was not managed, and pairs of cars, one from each service, would cross the line together.

I have omitted the service charts corresponding to individual examples below in the interest of space. Where external causes are given, these are taken from TTC eAlerts.

Only the worst of the gaps at Neville are detailed below. The service quality is spotty in the morning and midday, but really deteriorates through the PM peak and evening. There is a noticeable deterioration from early October onward suggesting a change in line management policy. 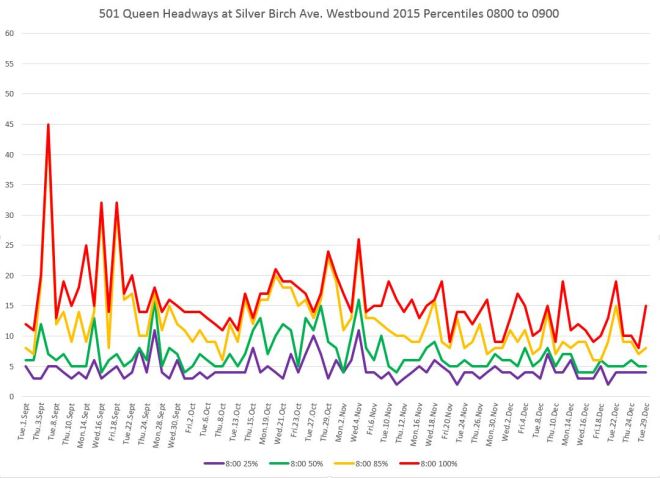 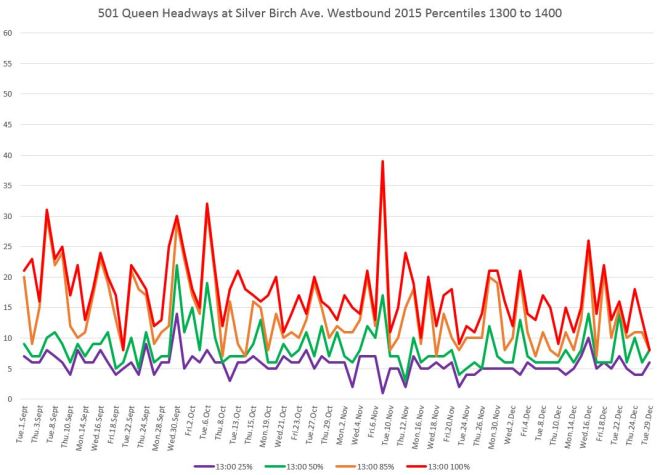 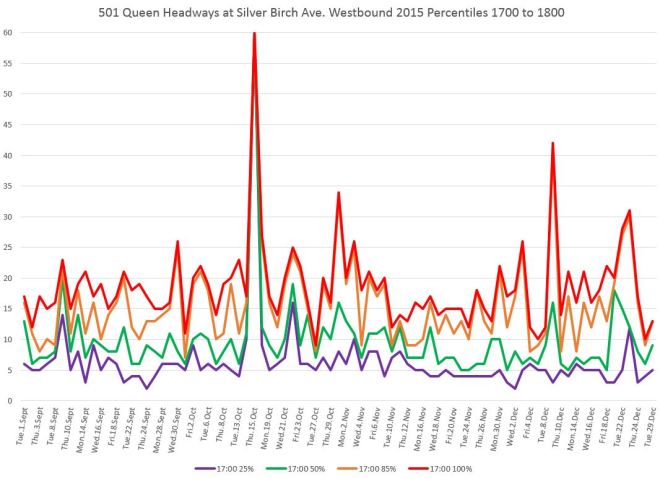 As the chart below shows, the quality of service at Neville Loop deteriorates after the PM peak and both the 100% and 85% values are often above the 20 minute mark, at times above 30. This is usually a direct result of bunching and short turning that treats the outer end of the line as a place where service can be sent now and then with the result that riders cannot count on it. This gives a reference point for comparison with service in later years when the TTC is supposed to have improved operations and reduced short turns. Among the worst gaps: 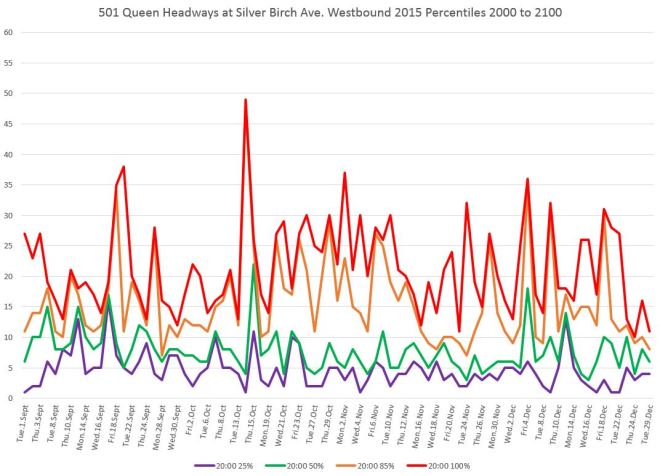 The quality of late evening service at Neville in the fall of 2015 was slightly better than the early evening, in that the maxima among the headways were not as bad. but the minima are closer to the axis showing a lot of vary short headways. There is no pattern of day of week or month, and the only consistency is a mixture of very wide and very short headways, the classic gapped/bunched service. 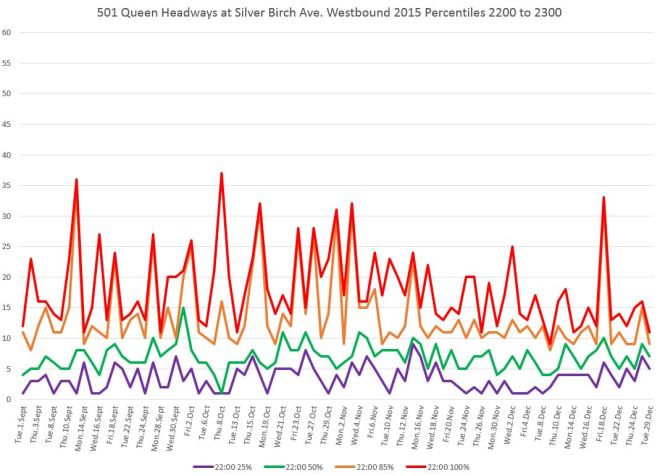 Schedules were revised in January not just for the split service, but to give added running time to streetcar service between Neville and Humber Loops. This improved service until the construction diversion via Spadina, King and Shaw began in May.

Running time was added to the schedules through the Spring and Summer, although this was not enough to compensate. In general, ten minutes were added to round trip times, but queues for turns especially at Spadina took longer than planned because of the lack of any transit priority.

Construction on Queen ran longer than planned, and new schedules were in place anticipating an early Fall finish. The diversion continued into early December, but there was no extra running time allowed and cars routinely ran late because of this.  This diversion period is marked off by the vertical blue bars in the charts below.

From Thanksgiving weekend until late November, streetcar service turned back at Woodbine Loop and a bus shuttle operated to Neville while track work was  in progress there. This period is marked off by the green bars. With this isolated service, the span of headways is considerably smaller and the various percentiles are more clustered around the median value. Even then, the service is ragged on some days, particularly late in this period. A review of the daily service charts (not included here) reveals that on some days buses were missing for part of the day, and those that remained appear to be running on their schedules rather then being spaced out to give even headways.

During 2016, the headways at Neville were better behaved than in the Fall of 2015, even during the period of the diversion. The major change was that the streetcars serving Neville no longer operated through to Long Branch, except late in the evening. (Note that there is a small gap in the charts because I do not have February data.)

During the latter part of the bus shuttle operation between Coxwell and Neville, there were four days when service was provided by fewer than the scheduled 6 buses. The remaining vehicles operated on their schedule causing gaps wherever buses were missing, rather than being evenly spaced. 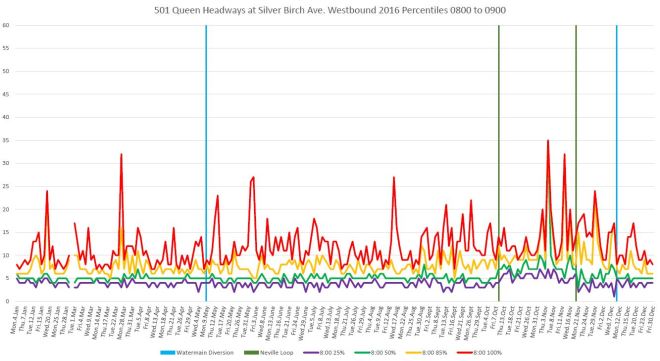 By midday, longer gaps at Neville are common, even with the shuttle bus service in the Fall. A particular problem arose when the streetcars returned because their scheduled running time was inadequate for the continued construction diversion west of Spadina. 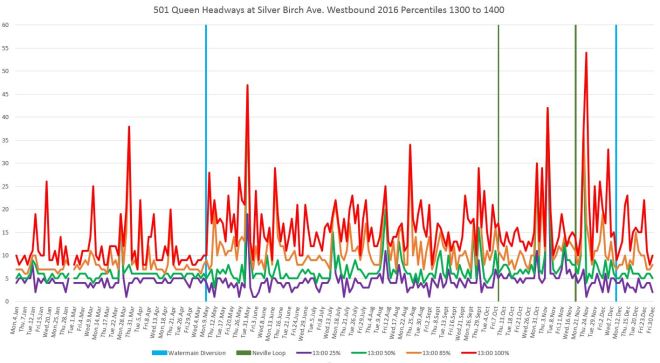 There were so many days with gaps of greater than 20 minutes that I will not burden readers with a long detailed list. Almost all of this can be traced to the effect of the construction diversion west of Spadina coupled with an inadequate scheduled running time. 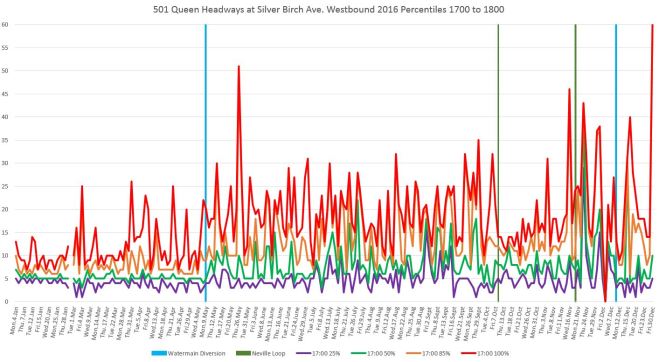 The evening service shows the same patterns seen earlier in the day. Although the median headways were typically below ten minutes, much wider headways would occur regularly. 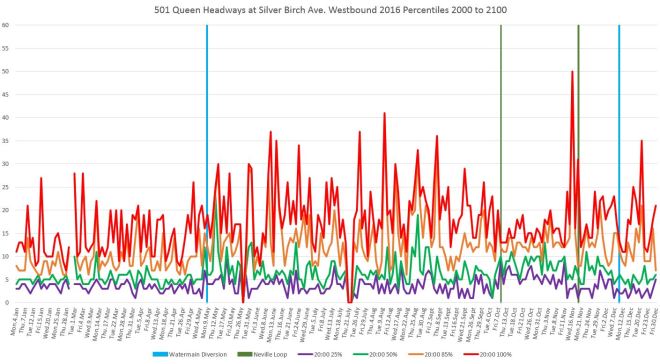 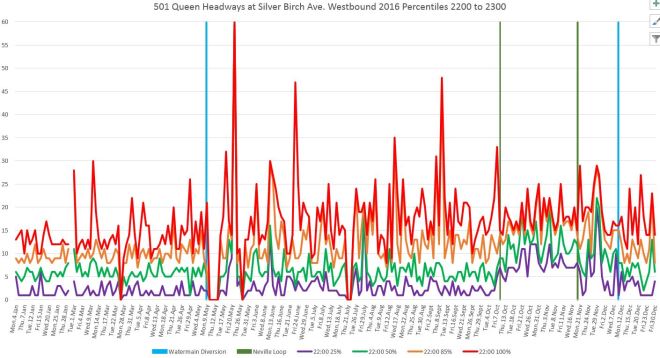 By the beginning of 2017, the scheduled trip time from Neville to Roncesvalles was close to or greater than the time allowed for trips to Humber at the end of 2015. The times were further increased in the March schedules for a construction diversion that did not actually occur. This is reflected in the less erratic service at Neville in early 2017.

Service diverted via Broadview, Dundas and Parliament during repairs to the Don Bridge at the end of October (between the dark red bars below).

The effect of the additional running time on service reliability at Neville, both for streetcars and buses, is evident for the AM peak hour. 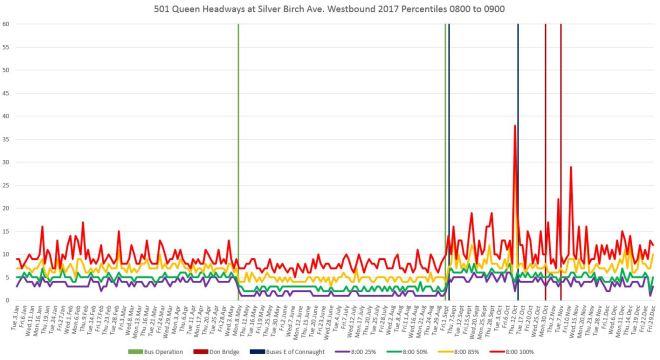 Service at midday is fairly well-behaved until the removal of construction-related travel time, and the onset of late Fall congestion in the core area. 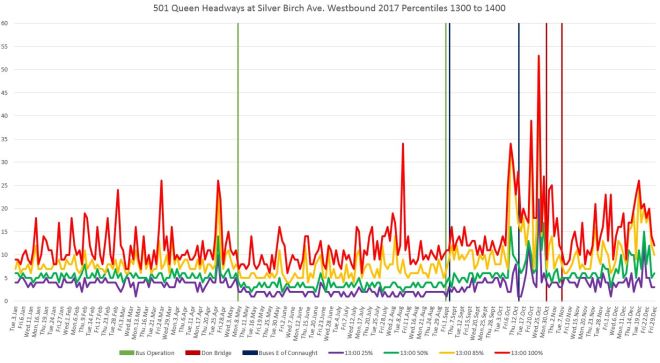 Congestion and service bunching are responsible for many of the peaks in the chart below. Only the worst instances of this are noted below. The problem is more striking in the Fall because of construction diversions. 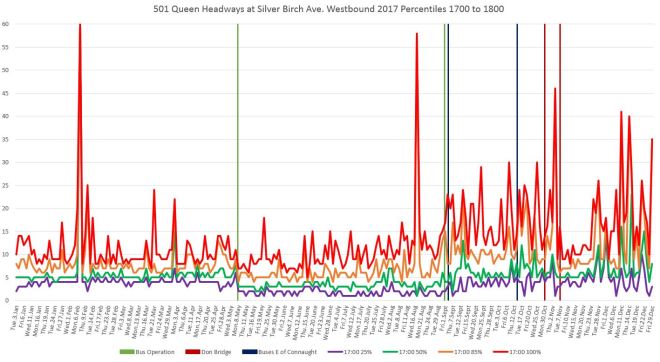 Early evening service at Neville tends to be irregular thanks to short turns which attempt to correct the effects of the PM peak period. A chronic problem with the shuttle bus operation in September was that vehicles ran in pairs with large gaps quite commonly. 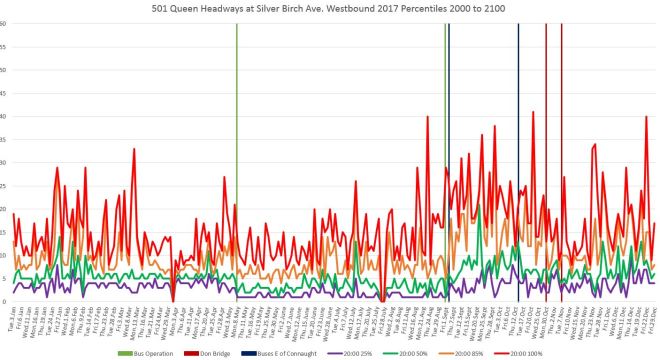 Late evening service, even when the route operated with buses, shows a familiar pattern of large maxima (red) and low minima (purple) in headways showing that service tends to run in bunches. 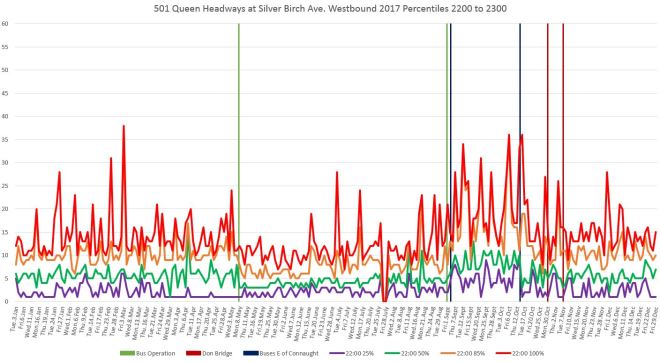 Schedules for the Queen car were changed in mid-February in anticipation of the line re-opening to Humber Loop, but service only operated to Roncesvalles. This added recovery time to the operation, and that should be reflected a reduction of short turns and greater flexibility in managing service. Although there is some indication of this in the data, the addition of March data, when available, will confirm this. 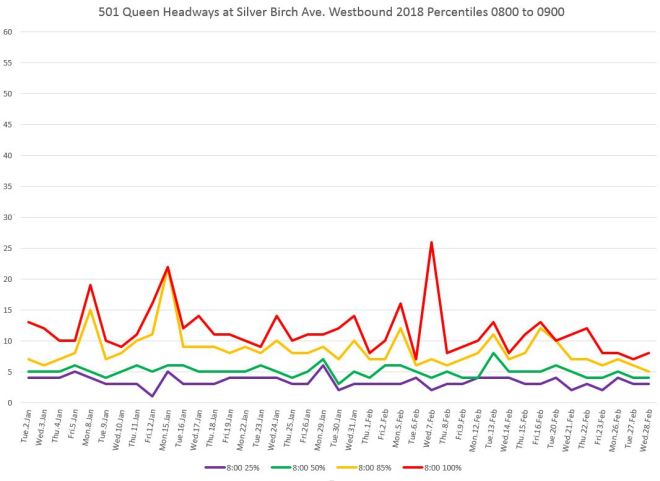 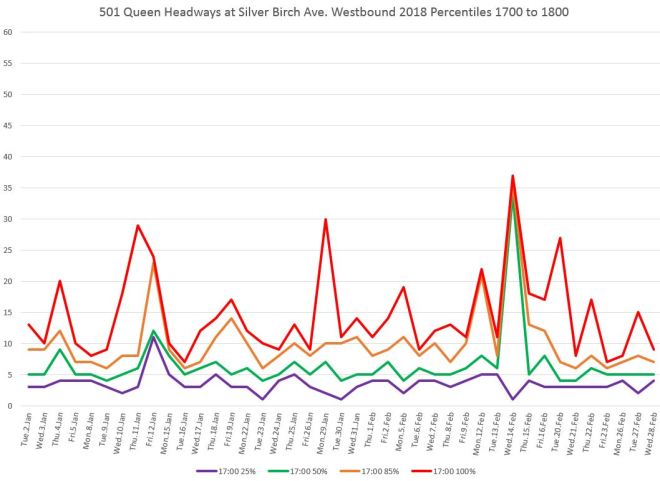 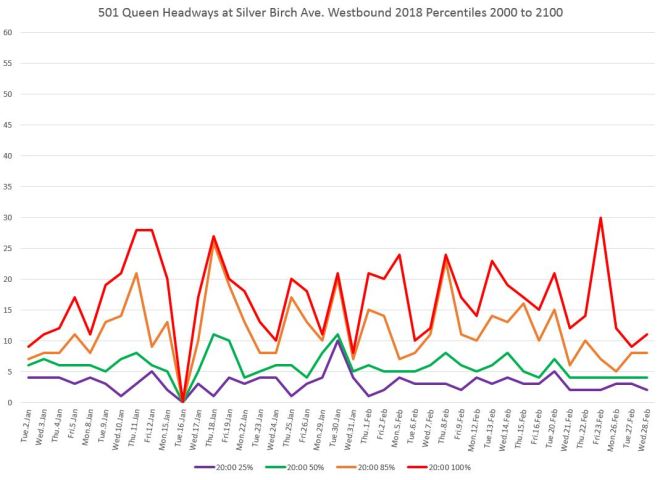 The longer maxima in the chart below are mainly the result of bunching in service. 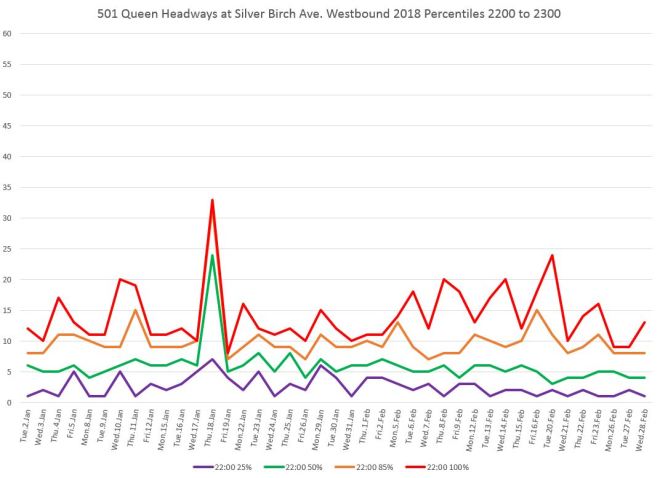 3 thoughts on “Service on 501 Queen at Neville Loop”