Schedule changes for 501 Queen pending on June 23 are, in part, related to a growth in travel times. This article examines the evolution of the route’s operation and travel times over the past year.

There are a lot of charts in this post in part to show many aspects of the discussion and in part so that readers can refer to different parts of the route of interest. All charts are clickable to open a larger version.

Previous articles in this series are:

The growth in 501 Queen travel times from 2018 to 2019 is summarized in the following chart of monthly averages across the route westbound. 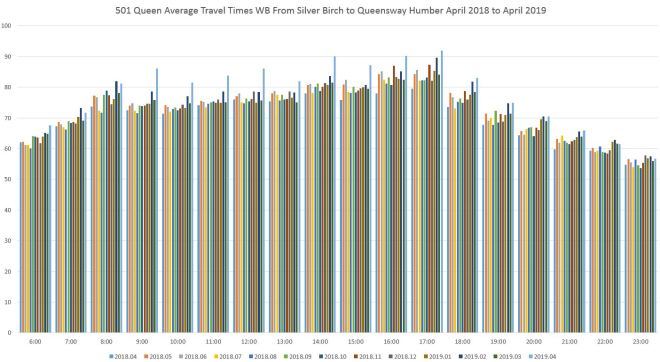 This prompted theories both by readers and by me about possible causes including:

The charts below, included in a previous article, compare average travel times by hour in each direction and show slightly longer averages for Flexitys compared to CLRVs. A valid question here is whether the CLRV times are artificially higher because they catch up to Flexitys and then travel at a lower speed than would otherwise happen. This is difficult to verify because there is already much bunching leaving Neville and Humber Loops, and “gap cars” (the first car in a parade) slows following vehicles regardless of which type it is. However, a detailed review of the headways in front of each type of car shows that in many cases Flexitys tend to be carrying wider gaps. This is not, however, consistently the case. 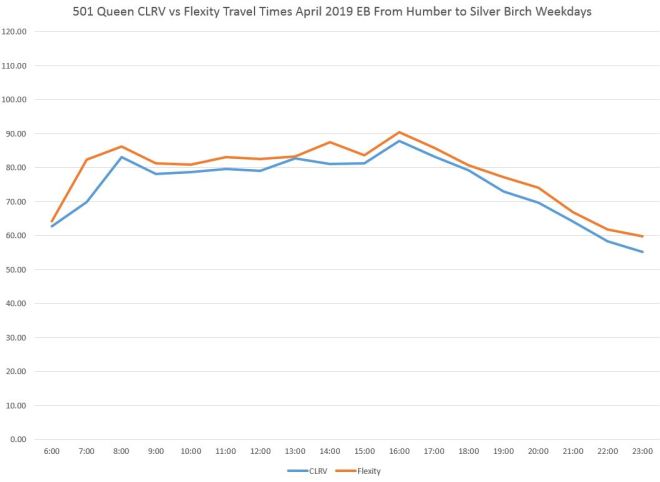 As to the concern about signal timing, a factor that affected the King Street Pilot for part of its run, this did not pan out for the route as a whole, but was a factor at one location. City staff advised that the only place that was changed was at the Queen/Lansdowne/Jameson intersection where work is underway, and transit signal priority has been shut off. Elsewhere, the signal timings were not modified.

A further question lies in a jump in travel times midway through April. Both the CLRV and Flexity travel times went up and also became more varied from day to day in weeks 3 and 4 of April. This implies some change affecting the route overall, not just one vehicle type. A review of detailed data showed:

Total trip times can be affected by extra dwell time at stops, by slower operating speeds, or by a combination of the two. In reviewing the data for April in both 2018 and 2019, I found that changes in speed were more marked than changes in dwell times.

Of particular note is that some of the areas where streetcars go slower in 2019 are areas of bad track where slow orders have been implemented. The number of these locations is growing on the streetcar network, and there is reason to worry that the TTC is not keeping ahead of this problem. Most notable is the track at Queen/King/Roncesvalles including the carhouse entrance and Sunnyside Loop. This has been on the books for replacement for a few years, and that work was delayed yet again to 2020 due to problems at the City with planning and contracting for the work. However, this is not the only place on the route where slow orders are a quick fix for track that needs repair. The TTC has a generic “go slow” policy for all intersections which slows streetcar service across the system.

I will update this tracking with May and June 2019 data as they become available.

In the next article in this series, I will review operations on 501 Queen during the period when there appears to have been an embargo on short turns.