In the first section of this article, I reviewed the headways on 60 Steeles West which, to be charitable, are not particularly reliable, especially west of Pioneer Village Station.

In this article, I turn to travel times along the route and how they vary by time of day. The chart formats here are similar to those in the first article, with one change: the charts breaking data into quartiles have been changed so that each quartile has its own colour making them stand out better.

As with the headway data, the behaviour of the route is broken by timepoints or screenlines along the route. Where the headway charts showed the intervals between buses passing a timepoint, the travel time charts show the time taken between these points, organized by time of day so that the rise and fall is clearly seen. 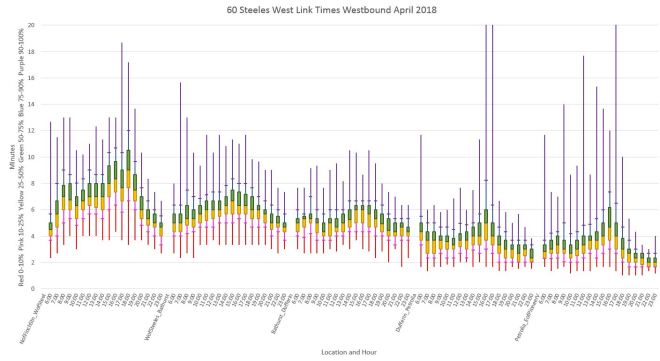 The first section of the chart below shows the time taken at Pioneer Village Station by buses that are continuing through to the west. The segments from Jane to Weston Road, and from Weston Road to Islington also show the effect of PM peak congestion.

Worth noting is that some of the peaks are fairly broad with longer travel times showing up well before the “peak” hour in the early afternoon. This means that any move to provide better transit priority must address a wider period than an hour or two traditionally thought of as the “peak”.

This chart shows the last segment from Kipling to the east side of the loop west of Highway 427 via Signal Hill and Steinway. Note that Steinway is the eastern limit of the on-street loop, and times are measured just east of this location so that terminal layovers are not included in travel times. There is no evening service here.

The route’s behaviour eastbound in a few ways notably that there is less of a peak effect in the AM eastbound direction that in the PM. However, from Kipling to Islington there is a marked rise in travel times for both AM and PM peaks. 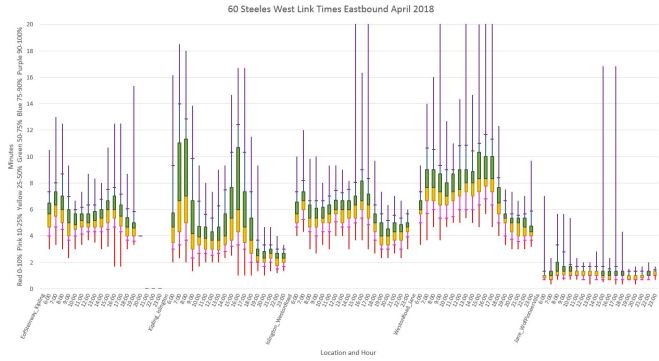 The full sets of charts are linked below.

END_OF_DOCUMENT_TOKEN_TO_BE_REPLACED

See also The TTC’s New Website where I am tracking problems that are still open, partly fixed or fixed.