Recent months brought much hand-wringing to TTC meetings where the mysterious decline of ridership threatens the stability of budgets and undermines planned service improvements.

In reality, ridership is not dropping, but for years the rate of increase has been in decline and this caught up with the TTC in 2016 when they overestimated potential growth.  Politically, an optimistic projection is useful because this inflates anticipated revenue, provides the basis for planning service increases, and sets the stage for chest-thumping claims that the disasters of a previous administration have been reversed.

The problem is that when the projections fail, there is a budget shortfall. This is small on the scale of the overall TTC budget, but large in its potential effect on subsidy needs and pressure for more fare revenue.

The debate always looks at recent years and asks why ridership growth that once appeared almost as reliably as the sunrise has fallen off. It is worthwhile, however, to take a longer view and examine how ridership has been changing over decades.

There are two sources of data for this review. Neither is perfect, but at least the numbers exist over an extended period.

Each of these sources has its challenges.

The Ridership Analysis is based on fare collection at the point of trip origin. If I pay my fare at a subway station, but later transfer to a streetcar or bus, I count as a “subway” rider. In theory, I will be a “streetcar” rider on the return trip and so things should even out, but this breakdown does not reveal the modes used in the course of multi-hop journeys.

Another recent problem is that ridership is assigned by vehicle type in this analysis, not by route. A rider on a 504 King bus counts as a “bus” rider, not as a “streetcar” user.

Passes are a particular challenge because they are only actually counted on entry to a subway station through a turnstile. Passes flashed at operators (including station collectors) leave no trace for the statistics.

The Route Performance figures come from two sources: counts of riders on TTC vehicles, and scheduled service mileage. (Much of the data in this series is stated in miles, and for recent years I have converted kilometres to miles for consistency. The unit of measurement is less important than the trend in service provided.)

Riding counts are not conducted often on busy routes because of the resources required, and it was common to see the same values reported on streetcar routes like 501 Queen for many years in a row. In theory, this should not be a problem once the entire fleet has Automatic Passenger Counters, and assuming that these produce reliable data, but we are years away from that.

Mileage is a standard unit for transit maintenance planning because many aspects of vehicle repair depend on how far the vehicle travels. In practice, some factors are really more time than mileage sensitive, but in a system where most routes operate at comparable speeds, time and mileage are interchangeable. However, a bus garage serving mainly slow inner-city routes will see different performance figures from its fleet because the time-sensitive factors will occur more frequently on a mileage basis.

From the point of view of service, vehicle capacity affects the meaning of “mileage” as a surrogate for the quantity of service. With the shift to low-floor vehicles, about 10% of the fleet capacity has been lost, and so 100 bus miles are not the same as they were two decades ago. There is also, of course, the question of varying mix of vehicle sizes in the bus and streetcar fleet. 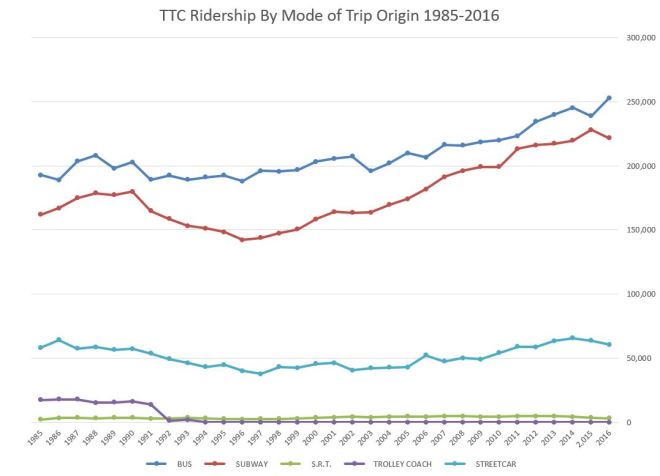 TTC ridership took a big hit in the mid 1990s thanks to a recession, and has been climbing back ever since. Although the total riding in 2016 was up over 2015, this was not uniform across all modes with higher bus ridership offsetting a drop on the other modes.

Detailed route statistics have not been published yet for 2016, and the degree to which the drop in “streetcar” riding reflects substitution by buses on several routes is unknown.

These values can also be compared using a reference year as a basis. In the chart below, 1990 is the reference, just before the steep fall in TTC demand when about 20% of the ridership evaporated.

All modes fell after 1990, but bus ridership was the least affected probably because suburban growth brought new riders to that part of the network even while the rest of the system lost a huge amount of riding. There was also some backfilling of bus usage counts as the trolleybus system was replaced. Recent problems with the SRT are evident in its ridership drop.

Ridership on the weekends has been growing slowly but consistently as a proportion of the system total and now stands at 21.2%.

The three charts above are available in this PDF.

The route by route numbers tell a very different story from the overall system figures. Most striking throughout these data is the decline in ridership on many routes across the system. This is masked, at least for the bus network, by strong growth on selected routes. This, plus growth on the subway, has allowed the TTC to think of a robust, growing system when in fact demand has been declining in many areas. A few of these are due to route reorganizations, but many are long slow declines accompanied by service reductions. This is quite noticeable on the streetcar network where a shortage of vehicles has prevented service increases for almost two decades.

The last of the “spare” cars were used to open the 510 Spadina route in 1997, and the fleet has been aging and shrinking ever since. The TTC was able to open Spadina because recession-era service cuts of the early 1990s had freed up enough cars, and the remaining old PCCs rebuilt for Harbourfront could be retired.

In the charts below, note that the horizontal axis is not adjusted to allow for the missing years. Changes since 2005 therefore appear “steeper” than they would be if the years were proportionately spaced.

Streetcar route ridership and mileage declined slowly from 1976 to 1990, and then fell along with system riding overall. Note that the drop in mileage of service provided was proportionately greater tan the decline in ridership. The numbers have improved in the past decade, but we do not know what 2015-16 look like. 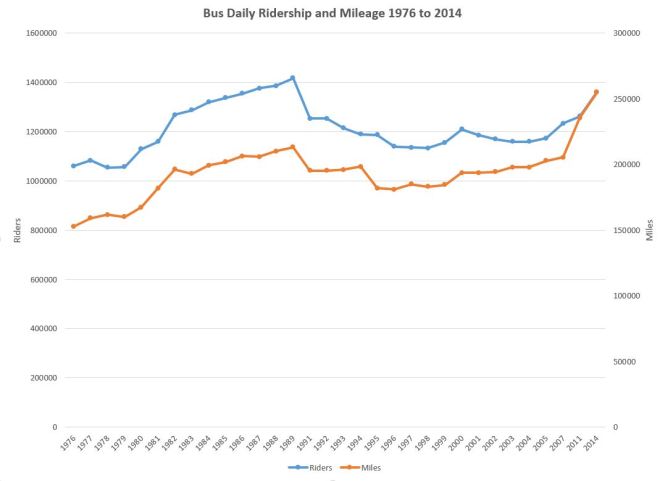 Unlike the streetcar system, the bus network saw riding growth thanks to suburban expansion. However, following the 1990s dropoff, the riders took a long time to return to the system and the 2014 number is still below the high point. Meanwhile, the amount of bus mileage has climbed relative to ridership as a result of reduced vehicle capacity with low-floor buses.

The density of ridership – how many riders board per vehicle mile – has always been higher for the streetcar network than for buses. This results from a combination of factors including vehicle capacity, the relatively longer trips taken by riders on many of the long suburban bus routes, and the strong off-peak ridership on many of the streetcar lines.

Ridership on the streetcar routes was once much stronger than today, although there are signs of growth over the past decade.

Riding on routes serving the Queen Street corridor fell by about one third since 1976, although the 2014 number shows a strong rebound. This has not been matched by service because what streetcars are available are stretched to cover increasing travel times rather than to provide more service. A few notes about each route as it appears here:

Ridership on King has stayed fairly steady and is now rapidly growing thanks to development along the route. The situation is different on Dundas and Carlton, although new development is starting to show up along them. However, this is mainly townhouse and midrise style, not the high rises of the King Street corridor.

508 Lake Shore numbers were reported together with 504 King up until 2014 when they were broken out. This route is not currently operating due to the streetcar shortage. 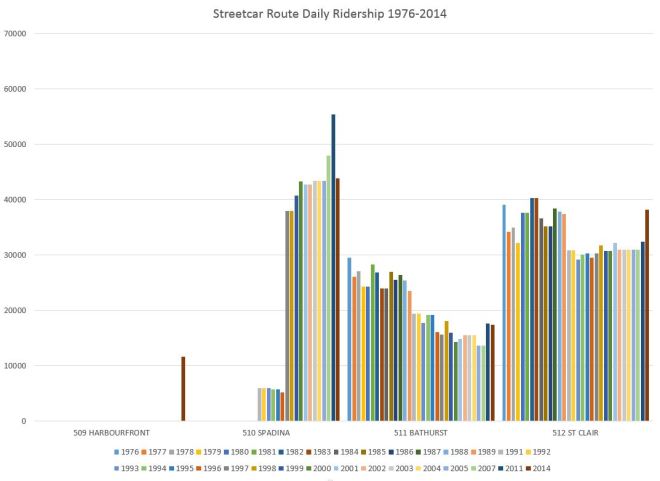 510 Bathurst and 512 St. Clair both lost riders in the 1990s, but have been recovering, somewhat, in recent years. 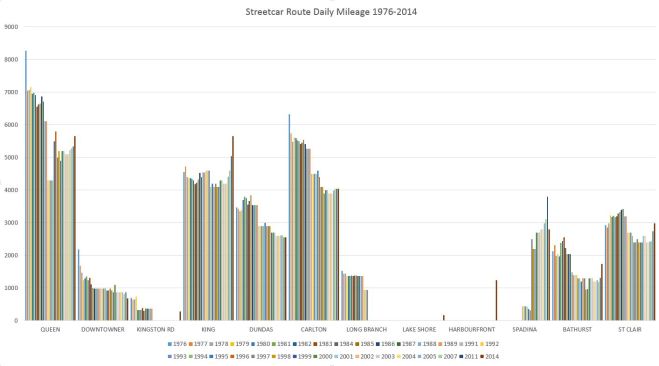 This chart shows the vehicle mileage operated on each route over the period with declines evident on many routes. 504 King remained strong throughout the period and had more service operating in 2014 than back in 1976.

For the bus network, I will leave readers to browse the PDF linked below which contains all of the ridership charts.

Note that in these charts, some routes have changed name and number. I have attempted to keep a consistent usage so that, for example 2 Anglesey and 48 Rathburn appear under the latter (current) name as do 4 Annette and 26 Dupont. Where a route has split (34 Eglinton East and 116 Morningside), I have left them separate.

The scale for all of the bus charts is set at the same maximum (60,000) so that values for routes are directly comparable among the sheets.

Many routes show long term declines in ridership. Some of these are in the old city, but many are in the suburbs. Bus ridership may be climbing, but by 2014 it had still not regained the level of the late 1980s. This cannot be explained away by the opening of the Sheppard Subway (2002) or the conversion of the Spadina bus and its 30,000+ riders to streetcar (1997).

Riding habits are changing, and transit growth comes mainly in areas where there is strong population growth. Where the system must compete for existing riders, it is losing, and this bodes ill for the system’s future.