Toronto’s Planning Department and the TTC hope to transform King Street as a realm primarily for transit vehicles and pedestrians with a pilot project aimed for fall 2017. Are the plans too aggressive, too timid, or just right? Is Toronto willing to embrace a fundamental change in the operation of a major downtown street?

On February 13, a crowd of hundreds packed into meeting rooms at Metro Hall for the launch of a new vision for King Street by the City of Toronto. Chief Planner Jennifer Keesmaat introduced the session with an overview of the project’s goals and the framework for upcoming studies and implementation. Top of her list is “Transit First”, a fundamental view of the street as existing primarily to move people in transit vehicles and, by extension, to shift from a street designed around automotive traffic to one built around pedestrians. This is not just an exercise in transit priority, but also a shift in street design beyond transit lanes to expand and improve pedestrian spaces.

Transit service is beyond capacity, and fast and reliable service cannot be achieved while accommodating the existing volume of cars. For the duration of the pilot, the transit experience should be improved.

Improving the transit experience on King Street should also transform the public realm experience for increasing numbers of pedestrians to help address open space deficits along the corridor.

King Street users are overwhelmingly pedestrians, not motorists, and yet the lion’s share of space is dedicated to cars, not to transit and those on foot. 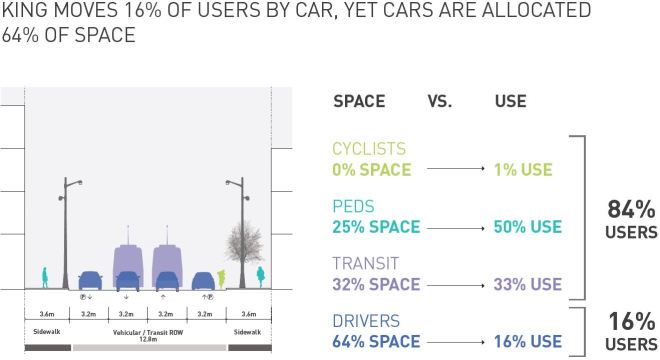 Inspired by trial street interventions by other cities, Toronto looks to take a short-cut in reaching a demonstration of what is possible with pilot configurations using a minimum of construction. This has several advantages. A trial avoids the lengthy, complex and finality of a formal proposal assessment, which can take years before anyone has a chance to learn whether a scheme actually works. A pilot can use temporary, movable installations such as planters, signs and road markings that can be quickly changed for fine tuning, to test alternate arrangements, or to undo the changes. Residents, businesses and politicians can buy into a trial hoping to see improvement, or at least to determine that side-effects are tolerable for the broader goals, without fearing they are locked into major expense and upheaval that might not work.

This is a refreshing change from endless studies producing little action, with the only downside being that some changes are simply beyond the limitations of a pilot. If a trial works well enough, then more lasting changes requiring construction can follow.

King is not a street like others in Toronto where transit priority has been attempted. Spadina, St. Clair and Queens Quay are all wider, and options for increasing road space on King are few. Traffic patterns and business needs differ on each street, and a layout that works in one place may not be appropriate for others. Equally, the benefits or horrors of these streets do not necessarily apply on King.

The city has three proposed layouts for a transit-first King Street. At this stage they exist only as general schemes, not as detailed, block-by-block plans. On that fine-grained level any new scheme will succeed or fail. Even if a plan achieves transit improvements, too many small annoyances, too many details overlooked could collectively derail a scheme. The planners flag this as a need for both a “micro and macro” view of the street – the big picture of better transit, and an awareness that every block, every neighbourhood along the street is different.

Common to all plans is a substantial reduction in the space available for cars and trucks. Some areas now used for loading, drop offs and cab stands would be repurposed either as through traffic lanes with no stopping, or as expanded sidewalk space into what is now the curb lane. Left turns would be banned throughout the area.

This demands a major re-think in how the street works for its many users both regular and casual.

The street is only four lanes wide, and along much of its length buildings come out to the sidewalk line. Only limited roadway expansion is possible, but not practically across the corridor. In any event, the focus is not on cars but on pedestrians and their transit service. Road improvements should not masquerade as benefits to transit.

In the illustrations below, the yellow areas indicate new space reserved for pedestrians while the blue lines show where cars would be expected to drive. 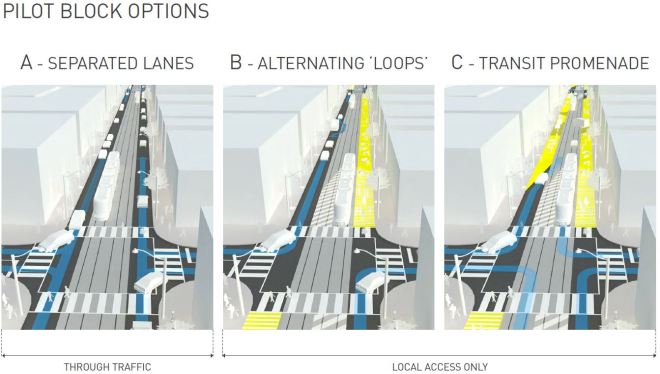