Although Metrolinx has yet to publish a report on the result of their consultation, it is clear that they have already decided on some changes to station names. This is revealed by a report for the TTC’s Board Meeting on November 23.

A proposed 2021 map (click map to expand) shows changes from the consultation information provided by Metrolinx (see original post below).

I will leave it to the trivia collectors to spot the stations shown as not accessible on this map where elevators are now under construction or well into the design stage.

The comment period for station names on Eglinton has now closed, and the results make interesting reading.

These are linked from two pages for the initial set covering stations from Keele to the DVP, and for a followup set of three more stations east from Leslie. Few of the proposed station names received strong positive feedback, and I will not attempt to do justice to the range of comments received.

A common thread is that the Metrolinx consultants have little or no actual familiarity with the city, and chose entirely inappropriate names for some locations, at times not even following their own overly complex “decision tree” for the process. At least they asked for feedback, but we won’t know until the process reports out whether they are actually listening.

There are times I suspect that Metrolinx consultants all hail from afar, and think Toronto is some sort of one-horse town where they can breeze in, look professional and leave. The problem with this is that the bad smell sticks not to the consultant, but to Metrolinx for being thick-as-a-brick to hire them in the first place.

It appears that Metrolinx has updated the station name list without bothering to tell anyone. The graphic on the Crosstown Project Home Page shows that some of the proposed names have been changed:

Meanwhile, “Wexford” and “Golden Mile” still identify locations that are inappropriate for the stations. 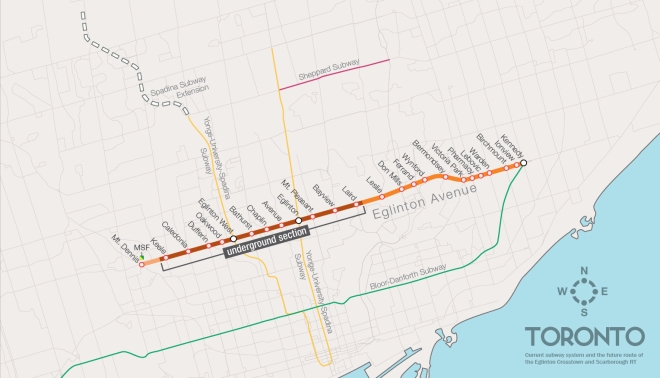