The Executive Committee spent a few hours discussing this report. As the morning wore on, it was clear that Mayor Tory was becoming unhappy with questions about his scheme. By the end of the debate when he spoke, he said:

I think a number of the questions raised by members of council today are perfectly legitimate questions which I’m sure our staff have taken note of and if they weren’t already being asked and answered, those questions, they will now be.  I just hope and I sense a generally positive sort of sense around here but I hope that we don’t get into being either sort of Douglas or Debbie Downer about these things. [Adapted from a quotation in the Toronto Sun]

Tory went on to say that he had “a mandate” from voters to build SmartTrack in a manner distressingly reminiscent of Rob Ford’s “mandate” to tear up Transit City. The problem with both claims is that voters did not elect Tory or Ford for those specific purposes, but in a reaction against the previous administrations, particularly in Tory’s case. Moreover, that “mandate” does not mean that the platform necessarily made sense as proposed, only that it was an attraction to voters that a candidate had concrete ambitions. We have already seen Tory backtrack on his claims that Toronto did not need more bus service (responding to Olivia Chow’s half-hearted support for transit), and there is no reason for SmartTrack to be treated as a divine plan on stone tablets.

As answers from staff to various questions made abundantly clear, there is a lot of work to do between now and first quarter 2016 when all of the details are supposed to return to Council. Staff went out of their way to avoid giving any indication of the way preliminary work might be headed lest they be drawn into a debate about “conclusions” before the supporting studies are in place.

The Executive Committee made a few amendments to the report’s recommendations:

1.  Requested the City Manager to forward the report (October 15, 2015) from the City Manager for information to the Toronto Transit Commission, the Ministry of Transportation, Metrolinx, the City of Mississauga and York Region.

2.  Requested the Chief Planner and Executive Director, City Planning to report to the Planning and Growth Management Committee on the results of the public consultations arising from the Preliminary Assessments of the Smart Track Stations, as set out in Appendix 2 to the report (October 15, 2015) from the City Manager, particularly with respect to the development potential of new stations.

3.  Requested the City Manager to work with Toronto Transit Commission, Metrolinx, and GO Transit, to develop a One Map Strategy where by major intersections and/routes of these transit operators are shown on future hard copy and electronic local and regional transit maps, once SmartTrack routes and stations are established.

The first recommendation is the original staff proposal simply to transmit the update report to other agencies. The second arose from a concern by Councillor Shiner, chair of the Planning & Growth Management Committee, that implications of and potential for redevelopment around SmartTrack stations be understood as soon as possible. During debate, he spoke about the success of development a long the Sheppard line, an ironic stance considering how strongly he had opposed development around Bayview Station when it was at the design stage.

The third recommendation arose from Councillor Pasternak, who never tires of advocating the “North York Relief Line” (otherwise known as the Sheppard West extension to Downsview). His desire is that maps show all of the projects that are in the pipeline during studies, not just the one that happens to be the subject of debate.

A notable absence in the staff presentation was any reference to the Scarborough Subway Extension as an alternative route for travel to downtown. That presentation covered substantially the same information as the background reports, but it included a few new charts about comparative travel times with SmartTrack in place. 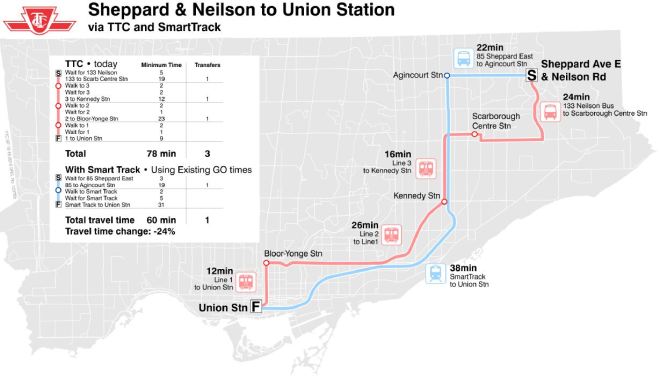 The important difference between this map [at p23] and the Tory SmartTracker website (which shows comparative travel times) is that the TTC includes the access and wait times for SmartTrack in its calculations. This reduces the proportionate saving over a trip. Another issue, of course, is that many riders do not work at Union Station, and taking SmartTrack there would be an out-of-the-way trip. This is not to downplay what SmartTrack might do, but to point out that if ST is to be part of a “network”, then advocacy for it must look at how it benefits all of the trips originating in some part of the city (say northeast Scarborough), not just those that conveniently lie on its route. This will be an issue in comparative ridership projections for ST and the Scarborough Subway Extension because those who are bound for midtown will almost certainly have a shorter trip simply by taking the subway rather than ST.

The original article follows below: