On April 16, 2019, Toronto Council by vote of 22-3 endorsed making the King Street transit and pedestrian priority area between Jarvis and Bathurst permanent. This is the first of two articles updating the collections of statistics I have been publishing about King Street since the pilot began in November 2017. This article reviews travel times and line capacity in the pilot area. The second will turn to service reliability both in the pilot area and in the outer parts of the 504 King route.

My thanks to the TTC for the raw vehicle tracking data on which these analyses are based. Presentation and interpretation of the data are entirely my own.

As a refresher, service on King between Jarvis and Bathurst was provided by two routes for much of the pilot period:

Service on the 504 was generally more frequent than on the 514.

In 2018, there was a temporary change in service over the summer to a new design. This was reversed in September, but at Thanksgiving weekend in October the new arrangement became permanent:

Service on the two branches is generally the same so that, in theory, cars alternate in the central section of the route where service is supposed to be twice as good as on the outer ends. A detailed history of service changes was included in the October 2018 update.

The balance of this article includes charts that have been published previously, but with the data extended out to March 31, 2019. The winter season shows expected effects such as a dip in travel times over Christmas Week when traffic is very light, and a peak at January/February corresponding to a major snow storm. The effects vary depending on time of day.

To view any chart at a larger size, click on it. Full chart sets are available as pdfs at the end of each section.

Travel Times Across the Pilot Area

These charts plot the 50th (median value) and 85th percentiles for travel times between Bathurst and Jarvis. In both cases the screenlines used are in the middle of the intersection so that the start and end times used are measured when vehicles crossed, not when they arrived at or departed from stops.

Changes in travel times before and after the pilot implementation vary by time of day, but this is not all of the story. An equally important improvement was a reduction in the variability of travel times shown by lower 85th percentile values so that service was much less likely to be erratic once the transit priority measures were in place.

Some changes are seasonal, and some even vary by day of the week.

The vertical shaded areas refer to periods when service on King was affected:

A few observations are common across the pilot area and by time of day:

King Street did not suffer from congestion before the pilot period, and so there was not a lot to gain from transit priority. Critics of the scheme routinely point to the AM peak stats as an example of why this arrangement should be removed without acknowledging that it is the whole day’s behaviour of the route, not just the AM peak, that is important. This is also an ironic choice by those who bemoan business effects when the vast majority of restaurants are not open until lunch when conditions are very different. 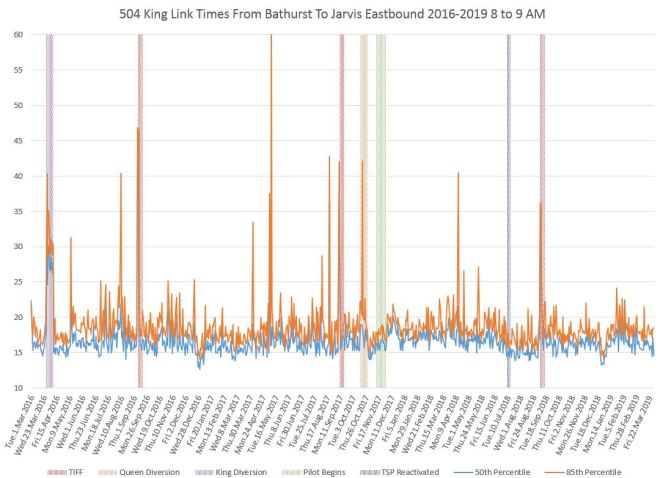 By midday, there is a clear difference in the before and after data which is less “spiky” with far fewer high 85th percentile values (orange) after the pilot began. Also, the seasonal increases in summer 2016 and 2017 are absent in 2018. 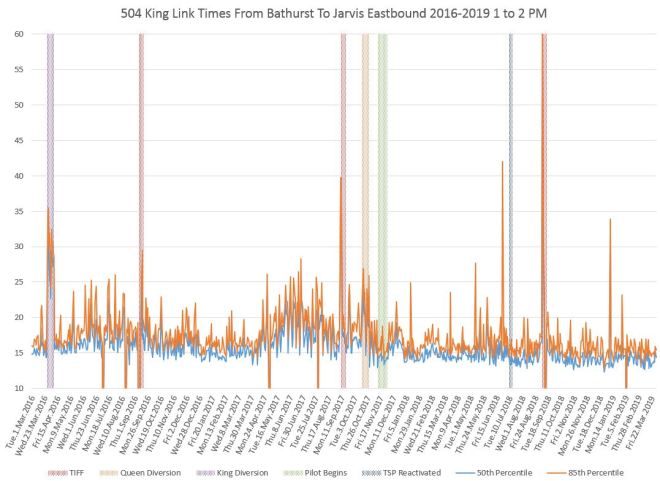 This section shows each hour of the PM peak from 4 to 7 pm, as well as a consolidated chart for the three-hour period. The effect of the heavy snow accumulation is evident in late January 2019 with a rise in travel times. This is only one example of a general problem across the city where the lack of snow clearing on major streets affected transit because of the loss of road space, although the effect on King in the pilot area was modest.

Of particular note in the “before” data are the number of cases where the 85th percentile is a half hour or more even though the mean values are 20 minutes or less. This shows the degree of disruption and unpredictability for travel times. In turn, that translates to erratic service over the entire route thanks to bunching and short turns as the TTC attempts to restore order to the service. 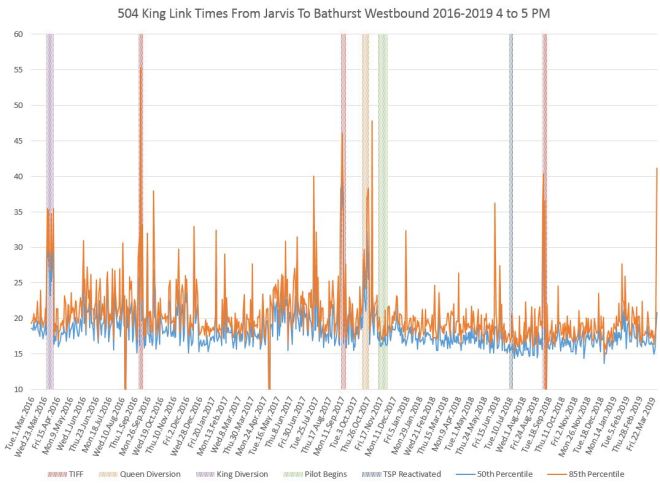 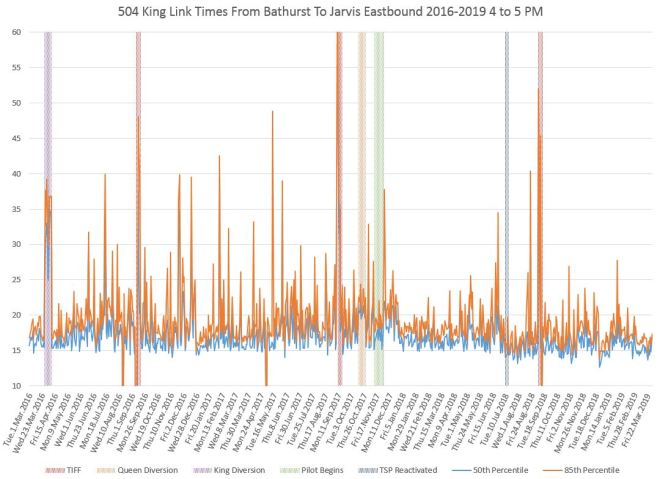 The comparison between before and after data is most striking in this period where the “after” peaks are lower and the 85th percentile values stay close to the 50th (median). 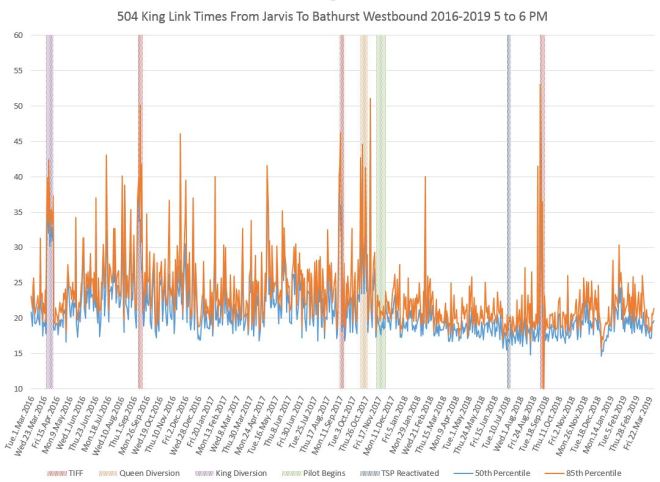 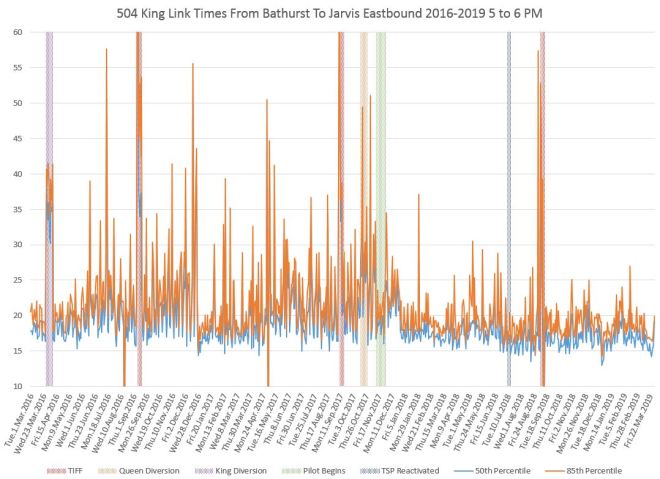 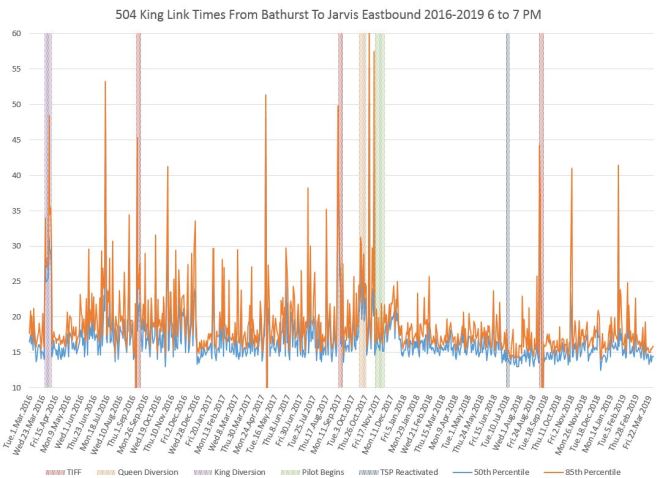 When data for the three hour period are combined, the 85th and 50th percentiles move apart because the former represent the “worst of the worst” travel times, while the latter give the median value including the shoulder periods where travel time is a bit faster. 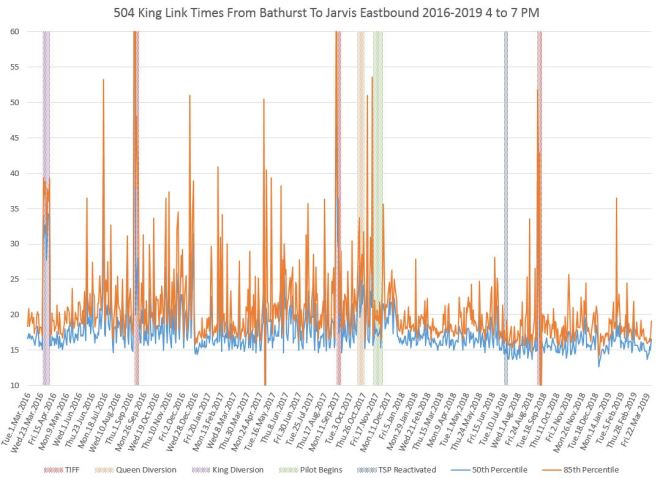 The evening period from 8 to 11 pm behaves differently from the peak and midday. Of special note in the before data are the regularly-spaced spikes corresponding to the end-of-week congestion in the Entertainment District. Those spikes get higher as the evening goes on, and they are highest westbound from 10 to 11 pm. There is a clear improvement after the pilot went into effect. 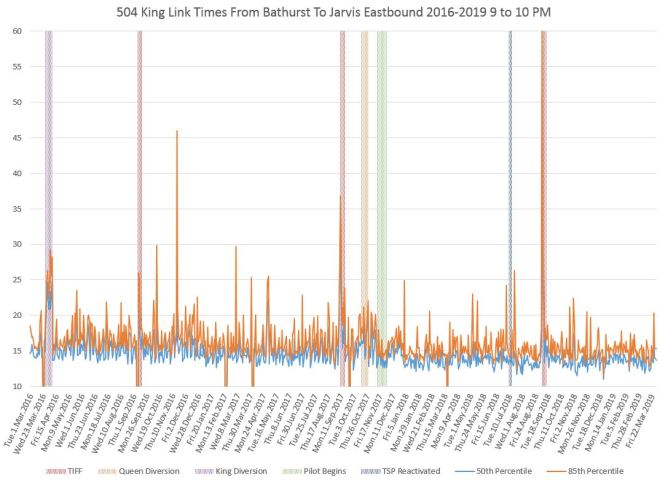 The capacity of service operated has changed over time at various points as the service plan was altered. Notably, the capacity between Dufferin and Sumach where both the 504/514 services, later the 504A/504B services overlap has improved considerably while the outer parts of the line to Dundas West and Broadview Stations now see less service. This is offset somewhat by the higher capacity of the new streetcars, but there are fewer cars operated making gaps in service worse for riders. I will turn to headway reliability in Part II of this series.

In the examples below, the charts shown in the article are for the peak hour between 8-9 AM in the morning, and 5-6 PM in the afternoon. Chart sets linked as PDFs at the end have the hourly results for a four-hour span, one page per hour.

Note that capacity calculations are based on the TTC’s Service Standards and this represents a reasonable level of crowding, but not a crush load. The actual ridership can be and probably is higher at some times and locations based on reports of riders being unable to board vehicles.

The capacity provided between 8 and 9 am southbound from Dundas West Station has remained roughly the same since mid-2018 although it dropped slightly with the reorganization of service into the 504A/B when peak headways on the outer ends of the route widened. There were several weather-related drops in capacity through February 2019. 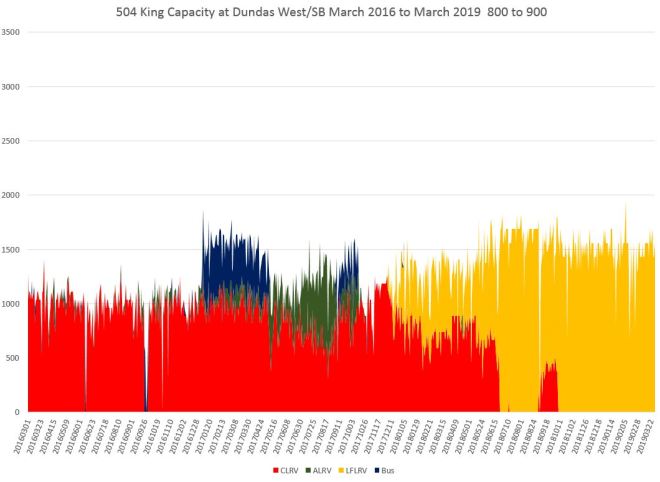 At Jameson, the  level of service until fall 2018 was better than today through the combined effect of more service on the 504 running past Dufferin compared to 514 Cherry cars that turned back there, and because of trippers that operated east from Roncesvalles in the peak hour. 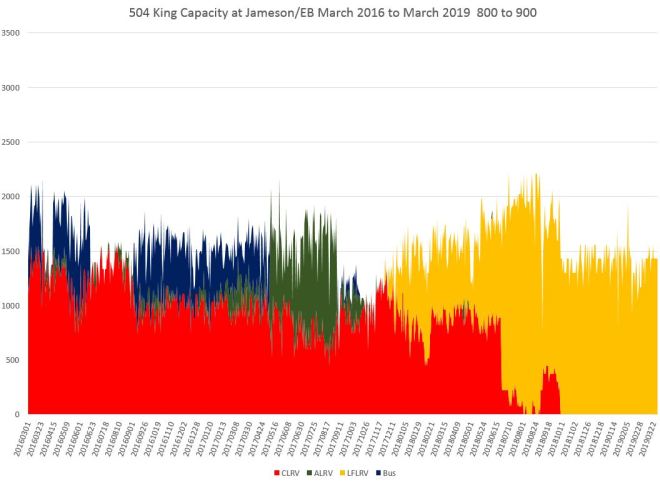 Capacity provided eastbound at Bathurst Street built up through 2018 as new larger cars replaced old ones on similar schedules, and has been running at just under 3,000 during the peak hour since the 504A/B route reorganization in October 2018.

Service southbound from Broadview Station is at roughly the same level as at Dundas West Station, and the service design for both ends of the line is similar. Before October 2018, all 504 service ran to these terminals, and after the 504A/B reorganization, the scheduled service on each branch was the same. As in the west end, there is a drop in capacity offered during extremely bad weather in 2019. In both cases, this was due in part to blocked tracks thanks to parked cars and the lack of snow clearing.

The service scheduled for the PM peak is not as frequent as in the AM because the demand is spread out over a longer period (school and work trips do not occur at the same times in the afternoon as they do in the morning). The degree of day-to-day variation shows that the route is still affected by disruptions outside of the pilot area that cause the actual service provided (and hence the capacity) to change quite a lot.