This article is part of a continuing series reviewing operations on King Street during the transit priority pilot. In Part I here, I review travel times and line capacity in the King Street Pilot’s area. In a follow-up Part II, I will look at headway reliability not just downtown but on the outer ends of the 504 King, 514 Cherry and 503 Kingston Road lines, as well as details of 504 King operation on days when it was badly disrupted.

There has been enough accumulation of data since November 2017 to establish that the pilot has a benefit, although the exact nature varies depending on location, weather and other factors. I will not publish this analysis again until August by which time the effect, if any, of the revised route structure to take effect on Sunday, June 24 will have been in place long enough to accumulate sufficient data. By then there will also be a number of major downtown events to use as reference points in how well the pilot area sustained its transit service.

On May 12, 2018, running time on the 504 King service was reduced to recover some of the excess layover time cars experienced at terminals. In the table below, the times are shown in the format “A+B” where “A” is the driving time and “B” is the recovery time, if any, at terminals.

The effect of the changes was to slightly reduce the scheduled headway, but over a route with a two-hour round trip, shaving off five minutes does not have much effect (5 minutes is 1/24 of two hours). There was also a slight improvement in scheduled headways for the 514 Cherry service.

The image below continues what became an iconic chart for the pilot showing the westbound PM Peak travel times from Jarvis to Bathurst. There is a peak in the 85th percentile, although not the median (50th) on May 30. This was caused by a collision blocking service westbound at Sherbourne. When the pack of delayed streetcars moved off, their travel through the pilot area was slower than usual, and this occurred during the 5-6 pm period covered by the chart.

In reviewing the charts for spikes in the 85th percentile during May, I encountered several instances where the high value within one hour for the pilot area was on one part of a broader problem with service on King Street. These are summarized below, and will be explored in detail in the second installment of this article.

More generally, there is a question of whether headway reliability is getting worse on King in spite of the continuation of stable travel times through the pilot area. This too will be explored in the second installment.

The eastbound capacity at Bathurst during the hour from 8-9 am continued to grow in May, although there had been some dips, mainly weather related in April. However, this growth is uniform across the AM peak and appears to be due to a combination of factors that took effect with the new schedules in mid-May: 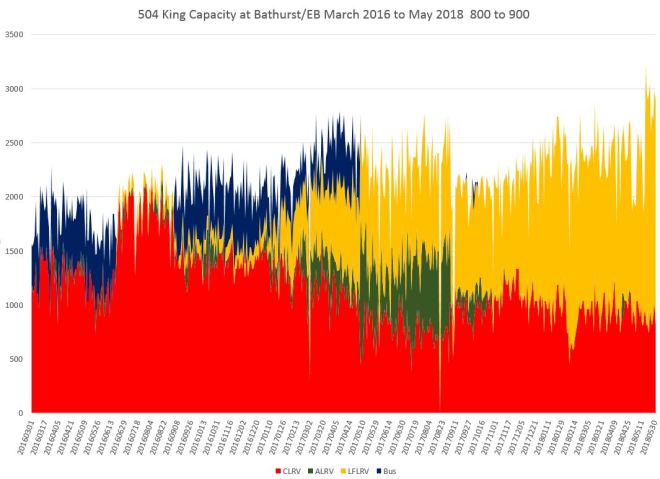 Westbound at Yonge, there is a marked jump in capacity in the 4-5 pm hour, but …

… this is offset by a reduction in capacity from 5-6 pm.

Charts showing the hourly capacity at various locations are linked below.

Travel time across the pilot area continued to be consistent. The chart below shows values for eastbound trips from Bathurst to Jarvis during the 5-6 pm hour. In these charts, green shows the median values (50th percentile) while red shows the maxima. The medians are down slightly from the pre-pilot era, but the big change comes in the maxima where the peaks have been shaved off except for very unusual circumstances (a storm in mid-February 2018).

The following linked files include these charts for both directions and for various times of the day. In both of these, the charts for evening periods continue the pattern of longer travel times on Fridays when the entertainment district is busy. This shows up in more detail in the day-by-day charts below.

The following charts contain 21 pages with details for the hours 8-9 am, 5-6 pm and 11-12 pm for each day of the week. As with the chart for all weekdays above, there are four values plotted corresponding to the 25th, 50th, 85th and 100th percentiles.

Travel times for 8-9 am continue the same pattern seen in earlier months, and there is little improvement between the pre- and post-implementation for the pilot. This was no surprise as congestion did not factor into conditions on King Street during the AM peak, and of course not on weekends. The first 7 pages of charts show the values for Monday through Sunday.

In the 5-6 pm hour, the situation is quite different with “spiky” data values before the pilot, but less erratic and overall lower values during the pilot. Exceptions occur for cases such as storms. The improvement in travel time is most noted late in the week, especially on Thursdays.

In the 11 pm to 12 mn hour, data for Sunday through Wednesday show now benefit from the pilot, but on Thursday through Saturday there is a marked change in travel times. There is a big spike on Friday, May 18 caused by a collision that closed King and University for several hours requiring a diversion via Queen.

As with the westbound data, 8-9 AM eastbound times pre- and post-pilot are stable. Two recent spikes on Wednesdays arose from weather (April’s ice storm) and from a collision that triggered a diversion (May 16).

There are delays as noted earlier on Tuesday, May 1 and Monday, May 7 causing spikes in eastbound travel times during the 5-6 pm hour on those dates.

During the 11 pm to 12 mn hour, the congestion eastbound through the Entertainment District is not as severe as westbound, and so there is not as much change for Thursday through Saturday evenings as in the westbound travel times.

Finally, this set of charts gives the 85th percentile values for each hour through the day to show how these values evolve and their stability (or lack of it) from day to day. Morning values tend not to bounce around too much, but by midday and then through the afternoon, the values change from hour to hour and day to day. The 5-6pm hour is generally higher than surrounding times, but it really stands out on Wednesdays which are busy days in the Theatre District. This effect is stronger westbound (the theatres are on the north side of King) than eastbound.

Another purpose of these charts is as a warning against the use of smaller datasets for analysis given the fluctuation in values by time of day and day of week. Any analysis of King Street operations needs to consider how the street behaves under worse than average situations when it has the most benefit.

Temperatures continued to climb as Spring found its way to Toronto, and except for a dip at mid-month, conditions skin to early fall, before the pilot began in November, were common. This brought greater pedestrian activity on the street as it blossomed with both flowers and restaurant patios.

Although there were several wet days through map, none was on the order of the mid-April deluge and ice storm. As with the temperature, the rainfall was comparable to that seen in early Fall 2017.