When John Tory became Mayor of Toronto in the 2014 election, he quickly discovered that his transit briefings as a candidate were far from the truth. Service deteriorated under Mayor Ford, and although Tory opposed a plan to increase bus and streetcar service during the campaign, he had a change of heart. The then-new Mayor supported the purchase of more buses and a partial restoration of service standards, notably those affecting off peak service.

Over the past three years, TTC ridership growth has levelled off and is dangerously close to slipping into decline. Many factors are cited, including the “do nothing” option of “every other city is losing riders so we’re no different” approach. That is not exactly a call to restore riders’ faith in the TTC.

An important issue is the question of actual service levels. Looking at the service budget and actual operations, one might get the impression that service is growing.

The budgeted service in 2017 is higher than in 2015, but the details are important:

One can argue that without the extra construction service, riders would have even worse service than they do, but this does not change the fact that regular service has improved very little over three years.

This can be seen in detail in the chart linked below which compares peak headways (the time between vehicles) for the January 2015 and September 2017 schedules.

The bus changes summarized in pie form show the breakdown. 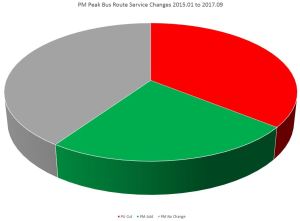 The total number of buses in service during peak periods is up from 2015, but this is entirely due to substitution of buses for streetcars either for construction projects or to offset the late delivery of Flexity cars from Bombardier.

When the total count of buses in service is adjusted for vehicles running on streetcar lines, the AM peak value is down slightly, and the PM peak is up only by 20 vehicles.

This does not account for extra vehicles dealing with congestion delays on the TYSSE project in 2015, nor the Crosstown project in 2017.

This is hardly a system that is actively trying to attract ridership with better service and more capacity.

In coming months, the TTC expects to publish an updated bus fleet plan (October 2017) and a Ridership Growth Strategy (November 2017). A fleet plan requires not just buses, but also garages, operators and maintenance workers. Both of these reports will be vital inputs to the Capital and Operating Budgets. Good intentions alone will not bring more service to TTC routes.

An important component of the fleet plan will be the target spare ratio for vehicles. The TTC has increased this value in past years to ensure that its fleet gets the pro-active maintenance required to field revenue service every day. However, adding to spares makes the fleet larger without changing scheduled service.

Absent the details of coming budgets, it is unclear how much provision, if any, has been made for substantial service improvements. Capital subsidy programs such as Ottawa’s PTIF (Public Transit Infrastructure Fund) may let Toronto buy more buses, but if Toronto Council will not fund the operation and maintenance of the added vehicles, then this is nothing more than a make-work program for the bus builders and a way for the TTC to retire much of its fleet sooner than planned.

There is an inherent dishonesty in many transit funding announcements because they address only the initial cost of provisioning vehicles and building infrastructure, not actually running and maintaining them. The TYSSE alone will add about $30 million (net of new revenue) in costs to the TTC’s budget, and it is far from clear whether they will receive added subsidy, or be forced to trim service elsewhere to handle this. (Part of the increase was already digested in the 2017 budget as startup costs for the new subway, but most of the cost hits in 2018.)

Meanwhile, Bombardier is supposed to ramp up streetcar deliveries this fall reaching 7.5 cars/month by October. As of September 24, the second “September” car, 4446, is about to leave Thunder Bay, and it is clear that Bombardier will not make the target of four cars for this month (ending with 4448). It is hard to believe that they will actually ramp up to a much higher production rate, and this threatens service quality on both the streetcar and bus networks. Even if Bombardier does begin to deliver at the planned rate, there remains the question of whether the TTC will restore streetcar operations on all routes, or continue to retire older cars.

The TTC faces several difficult years in a political environment where added spending on transit operations will be hard to achieve in the face of “tax fighting” politicians. The one product they are selling is service. Without real improvements, not just marketing flim-flam, the TTC will lose political influence and, with that, the funding they so badly require.

9 thoughts on “Where is the Extra TTC Service?”