Recently, the Toronto Star ran an article with the headline “19 of Toronto’s 20 dirtiest subway stations are on the Bloor-Danforth line”. One could (mis)read that as implying that the BD line is some sort of cesspool of poorly maintained stations, while the YUS is a sparkling beacon. There is also an unfortunate echo of arguments made by some that the BD line gets second class treatment because of the people it serves.

Intrigued to learn what the details of station cleanliness scores actually looked like, I asked for a copy from the TTC, and this was provided by Stuart Green, a sidekick in TTC Communications of the better-known Brad Ross.

Green provided a few comments to flesh out the numbers:

You will see an obvious upward trend globally, notwithstanding a few peaks and valleys.

Andy [Byford] has made station cleanliness a priority and our customers have noticed. Our modernized station management model and the hard work of our frontline janitorial staff are making a tremendous difference.

In a subway environment, the TTC is one of the cleanest systems in the world (just visit NYC). Our customer satisfaction surveys also reflect customer appreciation for just how clean stations – and vehicles – are today over five years ago.

FYI, we are also in the process of procuring new equipment which can blast clean the terrazzo surfaces with much better results (see attached pic).

The rating criteria is established by the TTC and provided to our external auditors.

The summary of it as follows:

The data are revealing when they are split apart in various ways. First, the system average scores including the maximum and minimum values attained in each survey by individual stations. 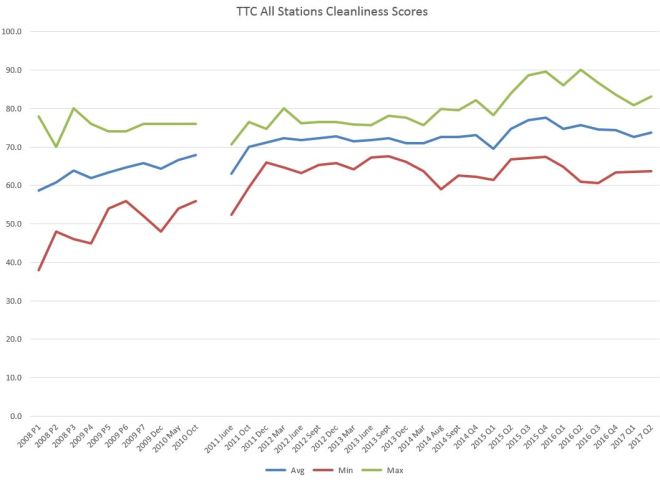 As Green notes, there is an upward trend, although it stalled for a considerable period  from 2012-14, and after an improvement in 2015-16, values fell again in 2017. Quite clearly there was a wide range of scores back in 2008 when this process started, but a lot of the improvement over early years was to pull up the bottom performers (thereby increasing both the minimum score and the average). The maximum score did not start to rise substantially until 2015.

There are two obvious points where there are changes in the data:

When the data are split apart by route, here is what we see:

The biggest jump for 2015 came on the Sheppard line with Yonge a close second and then the SRT. What is quite striking is that the improvement had little effect on the Bloor-Danforth line.

Another factor that stands out here are dips in Q1 of recent years probably due to winter conditions. This could well be a function of when the surveys were done as past years show data explicitly for December and March, but not for January or February.

The TTC’s goal for these scores was to achieve 72 points until the end of 2012, and from 2013 onward the goal was reset at 75. All of the averages lie within 10% of the target – we are not looking at two major lines of which one is pristine and the other filthy. That said, it is worth delving further to individual station scores. To balance between clutter and the ability to compare many stations, I have broken the BD and YUS lines into three segments each.

For the western part of the BD line scores have remained fairly constant over many years, although the tight grouping of the 2011-13 period opens up a bit from 2014 onward. The perpetually dingy Dundas West Station often sits at the bottom of the pack while High Park is often at or near the top.

In the central part of the line, St. George pulled out in front in 2014 and has remained there, at least relative to this group of stations, and its score consistently has beaten the 75 point target. This begs an obvious question of “what happened at St. George?” 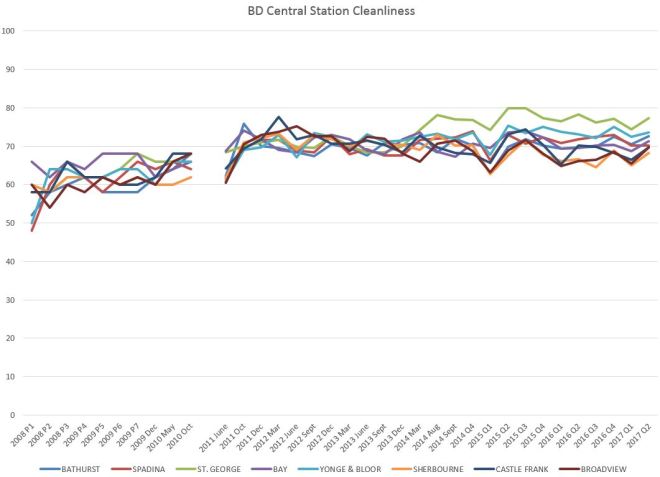 To the east, there is a notable drop at Woodbine in recent years, although this is almost certainly due to construction. Other stations with construction projects also show a dip, but with little sign of recovery. This begs the question of whether conditions during such projects become a “new normal” for station maintenance. 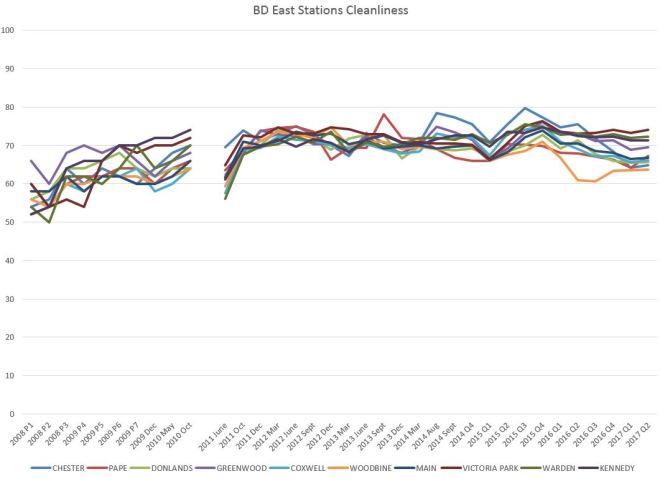 Across all of the BD line, the close grouping and consistency of most station scores from 2011 through 2014 at values in the low 70s is quite striking.

Meanwhile on the YUS line, there is a quite different pattern.

Starting in 2015, there is a jump in scores for downtown stations (the “U” south of Bloor) with many scores into the 80-90 range. Two notable exceptions are Dundas in 2014-15, although it has since recovered, and Union which has been under construction. It is worth noting that Union, even though it is nominally “completed” still ranks well below other stations in this group. 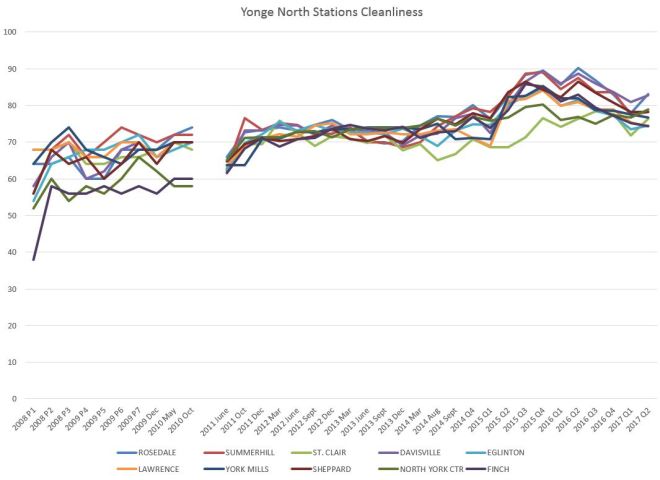 As with the downtown stations, those on the Yonge line north from Bloor show a marked improvement starting in 2015. The straggler, St. Clair, has moved back into the centre of the pack, although that is as much a case of downturn in scores for other stations as it was for recent improvements at St. Clair. 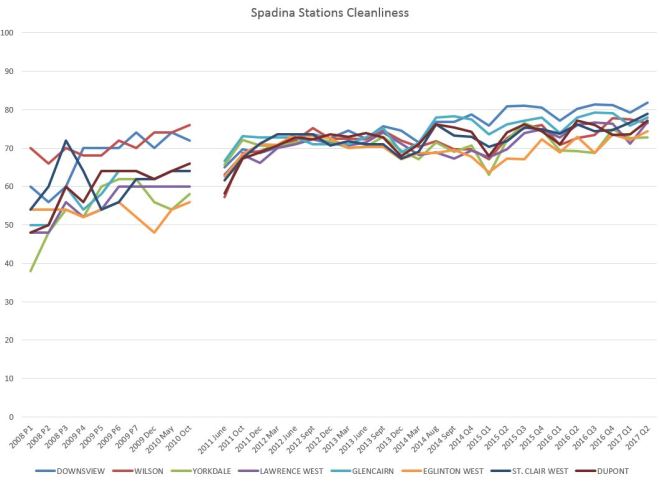 On the Spadina line, scores began to improve for some stations in 2014.

On the SRT, it is no surprise that the Town Centre station scores the lowest, although this is a particularly bad score. This is the most used station on the line (Kennedy is scored as part of the BD line) with a large bus terminal. For many years, STC station scored at or near the bottom of the pack system-wide. Finch was another poor-performer in early years, but this changed as scores for YUS stations generally rose. 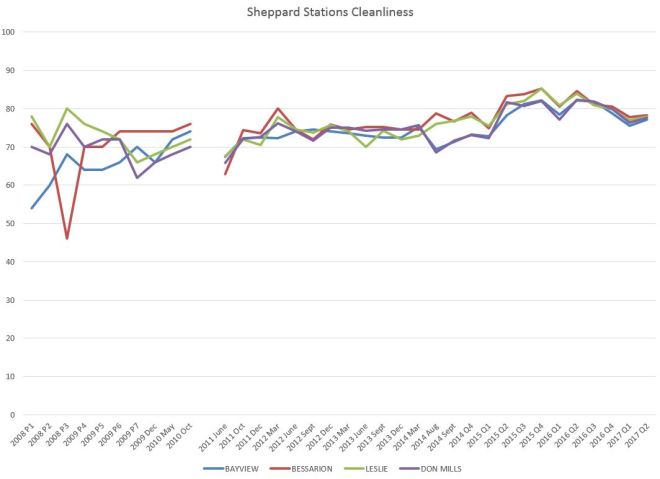 On Sheppard, the stations are comparatively lightly used except for Don Mills, and yet it manages to attain scores comparable to the other stations. Indeed recent scores for this line converge to a remarkable degree.

The Scoring System and Perceptions of Cleanliness

All of this begs several questions both about TTC maintenance practices and about how the scoring is affected by basic station conditions.

As Stuart Green noted, the station scores have several components:

The scoring for each component (glass, metal, platform edge markers, elevators etc) is rated on a low-high scale of 1-5.

However, various parts of any station undergo deep cleaning (as opposed to routine dusting and washing) on different cycles with different crews at different times of the year. For example, lighting fixtures are disassembled and cleaned (roughly) annually, and there is a quite noticeable improvement to the look of a station when this happens. Major cleaning and polishing of floors, escalators and elevators also occurs infrequently, and probably by different crews cycling around the system. Centre platform station walls can only be cleaned by crews on a work train that can reach them as opposed to side platform stations where the walls are beside the platforms. Track level cleaning happens every few weeks (based on observations of the longevity of debris at busy locations), but even so accumulations of “subway fur” can be substantial notably at Yonge Station.

It is highly unlikely that every aspect of a station will be in “tip top” shape at any one time because of the cyclic nature of this work. Therefore a perfect score of 5 in each category will almost never occur (except when a station is brand new), and hence an overall score of 100 will be hard to attain. The real challenge is to keep any component from dipping badly below a “4” which would correspond to an 80% score.

Green mentioned a photo of a recently cleaned stairway showing the benefit of new machinery at the TTC.

Eglinton is going to be a mess for the next few years as it undergoes major changes for the Crosstown LRT connection, and it would be worthwhile for the TTC to make a special effort to counter the construction effects as much as possible.

This photo begs the question of how much a station’s “look and feel” are affected by lighting. There are several components to this:

The TTC faces a challenge with the opening of the new stations on the TYSSE to Vaughan. Although these are architecturally impressive, they are physically much larger than “typical” stations on the rest of the line, and they will consume a disproportionate amount of maintenance resources just to keep them clean. Whether this will actually be provided, or be “stolen” from other parts of the system, or if the TYSSE stations will live for a few years off of their gleaming new interiors before starting to look uncared-for, remains to be seen. Like Sheppard line stations, some of them will benefit from comparatively low traffic volumes.

Overall, the scores for station cleanliness do show that the Bloor-Danforth stations are not at the same level as those on the Yonge-University-Spadina line. That said, the differences are not huge, and the BD stations are hardly a mess demanding major improvements. Even the “worst” stations are not pigsties.

However, there is clearly some difference in practices for the two lines, and this set in about three years ago when YUS scores improved and BD scores did not. The TTC needs to understand just what is happening here.

The TTC should also make a special effort to keep stations with construction projects clean to the degree this is possible under the circumstances. Construction should not be used as an excuse to defer work and to let conditions run down to be dealt with “when the project completes”.

Station maintenance is an area that is labour intensive, and where past years have seen cutbacks to make do with available budgets and headcounts. The effect is a gradual, subtle decline as the effect of longer major cleaning cycles builds up across the system. By the time this is an acknowledged problem, the leaner staffing and work model is already entrenched and climbing back to a better state becomes a fight for resources that should not have been cut in the first place. This is a microcosm for system maintenance overall, but one of the more visible faces of what can happen in a large organization seeking “efficiencies”.

The full set of charts is available in this PDF: Station Audit Scores

The raw scores for all stations as supplied by the TTC are available in this spreadsheet: Station Audit Scores Raw