On August 14, 2017, Metrolinx attended the Association of Municipalities of Ontario (AMO) conference in Ottawa with a presentation “Connecting the Region”. Although this was not a formal unveiling of the next iteration of the GTHA’s “Big Move” regional transportation plan, it gives a sense of Metrolinx thinking and what might be in the pipeline.

Compared with the original plan in 2008, this iteration is much more about building what is already in the pipeline as opposed to a grand vision with more lines than anyone could ever hope to see. This is an important evolution for Metrolinx from a purely planning agency to construction and, eventually, to operation of a large transit network.

During the past decade since the 2008 plan was developed, the GTHA has evolved in both its population and in the type of development that “growth” implies. Although the original plan foresaw a great deal of new transit, even that ambitious scheme would only barely keep up with growth in travel demand. Even this would be uneven with better transit in some of the “easy” corridors such as the rail lines, but much less to serve region-to-region travel.

That was always an issue with The Big Move – at best it would cap the growth in auto travel provided there was a massive, sustained investment in infrastructure and service, but a real decline in “congestion” and all that entails would be much more challenging. The pols put a brave face on the plan talking of reduced commute times, lower pollution, more time for families, but the benefits are not spread equally through the region, and much work remains to be done. Some of that is comparatively “simple” in the sense of one-shot, big-ticket construction projects like The Crosstown and the GO Transit upgrades for RER. But the more complex issue remains the need for local service to feed the new corridors, and for service in the large areas where there is no new infrastructure.

[An aside: this is the only graphic in this presentation in Metrolinx’ new black and white colour scheme for reports that arose from its adoption of a new brand/logo. Wiser heads appear to have prevailed for the remainder of the deck. More on that folly in another article.]

Projected population growth outside of the City of Toronto is substantial, and on a percentage basis is highest in areas where there is a great deal of empty land. What this might say about our ability to grow “sustainably” is a topic in its own right, but it shows a huge problem facing any transportation plan – growth continues to occur in a way that makes transit a difficult if not impossible alternative for much travel.

Many projects are underway, but we are in the difficult phase where comparatively little has been completed, and the government’s fading popularity could change the entire context for transportation debates and investments in the near future. Metrolinx listed what is already done or in progress.

Yes, you read that correctly: the Sheppard East and Scarborough RT projects are still in their list even though we know that both have been sacrificed on the altar of “Subway Champions”. To say that these are even being “planned” is a real stretch.

As for the rail plans, we know that GO/RER is supposed by be completed by 2025, but there is no published roadmap showing when each component will be available to riders.

The map of a future network is equally interesting for what it includes, but moreso for what it excludes. The first map shows many new GO stations, some of which only exist because of John Tory’s SmartTrack project. City Council has agreed to these in principle, but there is a further “stage gate” to pass through once cost estimates for “SmartTrack” have been firmed up.

Although the Eglinton West LRT extension (itself part of the SmartTrack package) appears in a later map, there is no mention of a scheme for a regional hub at Pearson Airport.

Also missing from the rail corridors is the “High Speed” link to Kitchener-Waterloo and London, and the “missing link” freight bypass project that will free up capacity in that corridor. These are not Metrolinx projects per se, but the future of service in the KW corridor depends on what happens with both of them.

The subway extension map shows the Yonge extension to Richmond Hill and the Relief Line to Don Mills & Sheppard, and includes but does not flag the Scarborough Subway as a “future” expansion.

Although the Sheppard East LRT is on the map, it is not flagged. The Eglinton East LRT extension is nowhere to be found. I checked with Metrolinx about this, and they refer to it as a City of Toronto project, hence its exclusion. This is a bizarre attitude for a “regional” agency that must plan for a transportation network to be provided by multiple investors and operators. Leaving routes off of the map because they are not “your own” projects is rather odd, especially when the same presentation includes references to lines few people believe will ever be built.

This network, whatever it might include, must be viewed in the context of travel demand.

It is no surprise that the demographics of the GTHA’s population are changing as the Baby Boom ages out of the workplace.

However, these percentages are not the whole story because population overall is growing, and with it demand for work, school and recreational travel.

The total trips taken rise and with them, almost lock-step, the shares for each mode. There is a hope that auto travel can be shaved by a few percentage points and that transit can hold its own relative to 2011, but these changes are well within the level of accuracy of projections. There will be more trips to be accommodated by each mode, but no big shift in share to transit. And that presumes that all of the projects on which the projections rest are actually built.

Of particular concern is the future distribution of trips by mode within and between various parts of the GTHA.

(In the chart below, note that the values are shown as percentages, not as absolute numbers and so one must infer the actual volume of trips each component represents.)

Travel for work within downtown Toronto is only a small part of the regional travel, and it will continue to be dominated by transit and active modes (walking, cycling). Similarly, travel to downtown is mainly the preserve of transit, but there is no decline forecast in the percentage of auto trips. With the total demand to downtown rising, this is a troubling situation given the lack of available road capacity.

Travel from outside of Toronto into the city as a whole will continue to be over 80% by auto, and the percentages for travel outside of Toronto are similarly high. An important issue once one gets away from downtown is that travel is a “many-to-many” problem that is not easily served with a few high-capacity corridors. Even the 400-series highways and the major arterials are full, and there is limited growth for auto travel. One good example lies at Pearson Airport where road access constrains intensification of development, and yet the network serving the area is overwhelmingly road-based. A transit network linking a broad catchment area to the airport will be challenging to construct. The situation is even worse for areas with less potential for concentrated development.

By even the most rosy of political posturing, this is not a “Big Move”.

Employment growth will continue modestly in Toronto with a downtown focus, but is projected to rise substantially in the regions. It is not at all clear how the proposed regional network addresses the volume and location of projected growth.

Another major source of travel demand is for trips to large academic campuses. This follows a different pattern both in space (many campuses are not located in the areas well-served by job-oriented transit lines) and in time (travel occurs at a different time of day, and travel can be counter-peak to “conventional” commuting). This is a particular problem because students are more likely to be transit customers if only the transit exists to carry them.

An important aspect of any large-scale planning is engagement with the public and with the many municipalities and agencies that will be affected by any new transportation network. 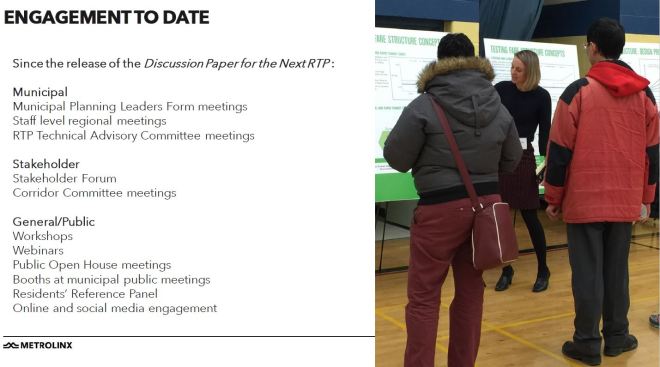 The photo intrigued me because the presentation boards clearly refer to the Fare Integration Study that has been underway for a few years, and which has been the subject of much debate as to the appropriate way riders should pay for transit service. The AMO presentation is silent on the issue, but Metrolinx advises that an updated study report is expected at the September 14 board meeting.

What is particularly striking through the AMO presentation is the absence of local transit operations and funding. Queen’s Park continues to steadfastly say they are not in the business of paying for local transit beyond the gas tax now assigned for that purpose, and mainly used for capital, not operating costs in most cities. This leaves cities on the hook for the operating cost of feeder services to Metrolinx’ network improvements, not to mention the operating costs for Metrolinx-funded capital facilities. One might argue that “increased provincial funding” is a big shell game where any new money “given” to the cities is clawed back by various schemes to force their support for operating provincially built lines, not to mention using the provincially-mandated fare system, Presto.

The draft “Next Big Move” will be released in September for consideration by the Metrolinx board followed by public meetings. If they run true to form, we can expect a preview through selected media. The public face of the plan will be rosy – that is how Metrolinx works – even though the political and financial future of regional transit is murky. 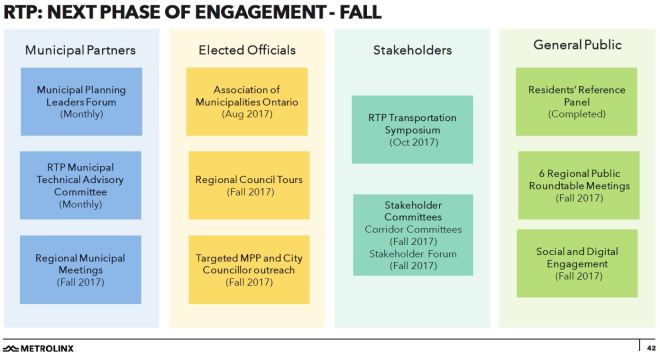 All of this wraps up by year-end, just in time for a revised plan to become fodder for the 2018 election.

32 thoughts on “Metrolinx Previews The Next Big Move”