The summer schedules will be unusual for the TTC this year because of the Pan Am Games. There will be three periods running from:

To condense the information about schedule and service changes, I have adopted a different format from the usual tables to show (a) all of the time periods for affected routes and (b) the periods where there is actually a change from the “standard” summer service (the pre-games period). Where there is a change, it is highlighted in red.

For this type of event, the day-to-day requirements on each route are hard to predict, and so the TTC has scheduled a much larger than usual pool of standby or “run as directed” vehicles that will be available throughout the network.

Schedule changes implemented on June 21, 2015 have already been detailed in a separate post. Pre-games service levels are shown for reference in the table linked below only for routes that are affected by the Games schedule changes.

Pan Am routes will operate on the following days:

Additional service beyond the scheduled level will operate for the Para-Pan Games on the several routes serving Para-Pan venues:

From Friday, July 10 to Sunday, July 26, late night repair work on the Yonge subway tunnel north of Eglinton will be suspended, and service will run until 2:00 am on all days.

Weekday service on 7 Bathurst Bus will revert to regular buses on the schedule used in July 2013. This will free up articulated buses for Pan Am routes.

Low floor streetcars will operate on 509 Harbourfront, 510 Spadina and 511 Bathurst during the games period. All service on Queens Quay will be provided by Harbourfront cars, and the Spadina route will terminate at Queens Quay Loop.

Because the CNE grounds will be closed, all 29 Dufferin buses will loop at Dufferin Loop (CNE western entrance). Additional shuttle service will operate between Dufferin Station and Dufferin Loop. The 329 Dufferin Night Bus will also turn back from Dufferin Loop rather than operating to the Princes’ Gates. This change remains in effect until September 6 due to the CNE.

Route 116 Morningside will divert southbound via Ellesmere and Morningside, bypassing Military Trail, to avoid congestion at the Aquatics Centre during the games.

Route 198 UTSC Rocket will terminate at the Aquatics Centre rather than the usual UTSC loop during the games.

Route 106 York University will divert westbound in the campus via The Pond Road, York U Busway and York Boulevard to The Common because Ian MacDonald Boulevard is closed. This change began on June 15 and is scheduled to continue until September 6. Route 196 York U Rocket will operate with articulated buses and with additional service.

From July 11 to August 8, 172 Cherry will loop downtown to City Hall via York, Queen and Bay to King.

Route 94 Wellesley will divert via Bloor between Queen’s Park and Spadina as Hoskin Avenue is closed as a games venue. This diversion is scheduled until September 6.

Route 6 Bay will divert via Dundas, Yonge and Queen on the afternoon of Saturday, August 15 for the Para-Pan closing ceremonies at City Hall.

On Saturdays July 18 and 25, and on August 8, Parkside Drive will be closed for marathon and cycling races. The following routes are affected:

The base schedule for Sunday July 26 will be a Holiday schedule. Because this is the last day of the games, some Pan Am services will not operate: express services on Steeles West (60F) and York Mills (95E), the 194 Aquatics Rocket, and the 406 Downtown Venue Shuttle. 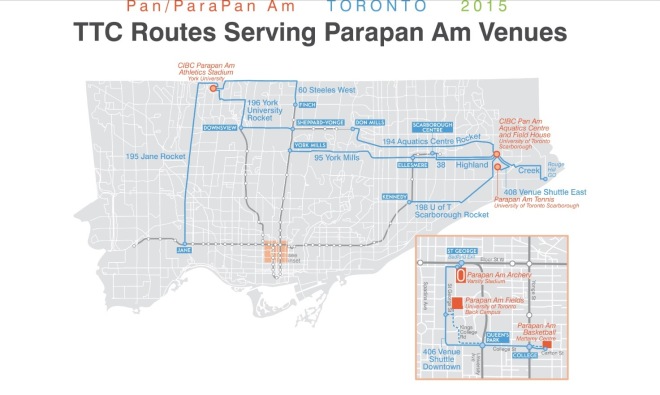