Recently, the TTC Board, a largely dormant entity during the era of Rob Ford and Karen Stintz, decided to take a more active role in oversight of the organization by striking new subcommittees. In addition to the already existing Audit Committee, there is now a Budget Committee with members Rick Byers, Councillor Shelley Carroll, Councillor John Campbell, Councillor/Chair Josh Colle, and Councillor Joe Mihevc.

Agenda materials for this Committee are available on the TTC’s website, but on a different location from the those for full Board meetings. The Budget Committee met on June 17, 2015, and its agenda included two reports related to ridership and service levels:

These are intended as introductory overviews for Commissioners who are not steeped in the details of TTC planning or policy, and they give a general sense of management’s focus as the TTC enters the 2016 round of budgets.

Note: The Service Standards document has most of its content in portrait format even though the pages are primarily in landscape. Save the document, open it with Adobe Reader, and then rotate the displayed images.

END_OF_DOCUMENT_TOKEN_TO_BE_REPLACED

The City of Toronto recently polled residents on a variety of issues related to transportation, notably the effect of and attitudes toward construction activities, as well as the top issues facing the city. A summary of the results appeared in a press release on June 26, 2015. Although the survey focuses on road work, it also picks up an interesting view of transit users and of travel choices.

As the Globe’s Oliver Moore first pointed out on Twitter, the headline on the release misleadingly states:

Congestion and gridlock remain top concern for Toronto residents, according to City of Toronto survey

There is a fundamental problem with this claim.

Better transit actually appears under three separate responses: Poor transportation/transit (22%), Poor TTC (4%) and Building subway transit network (3%). This is not to dispute that congestion and gridlock are important, but that this response ranks well behind, collectively, transit-related responses. 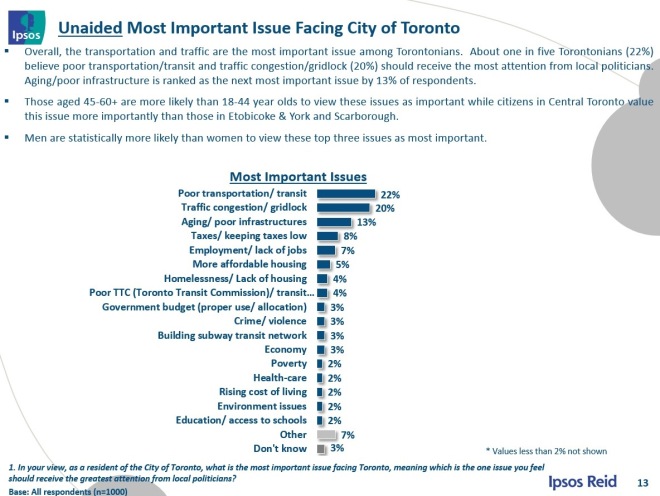 In the detailed breakdown, only the top three responses remain, and there is some disparity between the rankings. What is unfortunate, quite obviously, is that the category “poor transportation/transit” does not distinguish between modes. We do not know what type of “transportation” most concerns each type of respondent.

When the survey turns to the question of where Toronto should focus its efforts, transit comes out quite clearly on top as the number one pick of 27%, and in the top three for 61%. 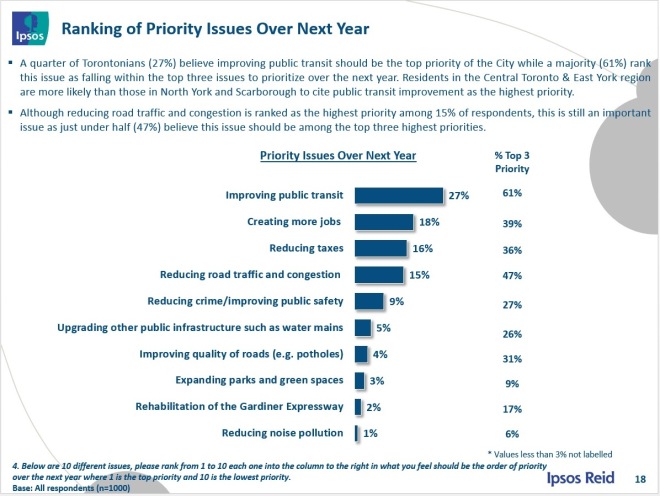 The breakdown is revealing because it shows that there is much stronger support for better transit among those living in more central areas, and this support falls off  notably in Scarborough, especially north of Highway 401. This begs a “chicken and egg” question: does improved transit get more support in areas where service is already relatively good and transit usage is higher, and can transit spending be politically competitive further from the core where it does not have as strong a presence? 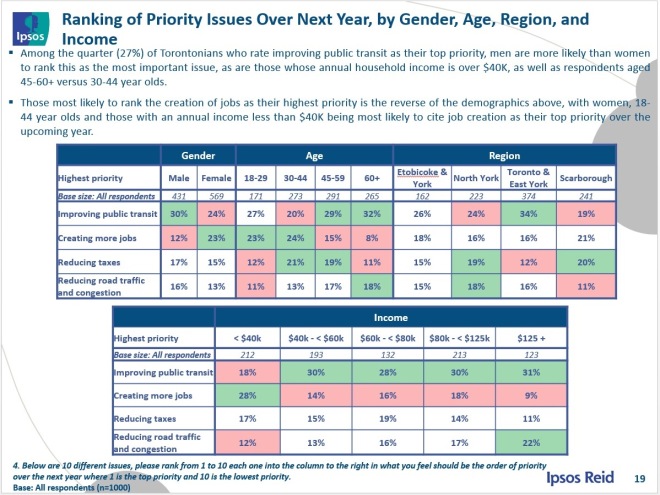