The TTC is experimenting with changes to its signage for surface stops with trial installations on the 94 Wellesley bus route.

TTC’s Chris Upfold presented the new designs at the February 25th Commission meeting using a short PowerPoint which I have excerpted here.

The rationale for the new design is that existing stop poles are inconsistent in their display of information and format.  This is no surprise given the evolution of stop treatment over the years, and the application of overlay stickers as needed to reflect changing services. 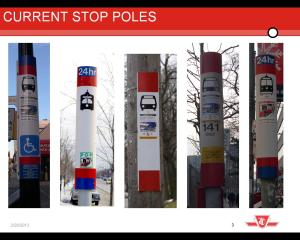 Maps in shelters give the entire system view, but with a lot of extra detail that clutters the map.  However, these maps also suffer from the scale at which they are displayed and the absence of “You Are Here” indications.

Much supplementary information is crowded onto the map that may be of little interest to the casual traveller who just wants to get from “A” to “B”.  TTC research finds that these maps are not heavily used.

For the new stop poles, the design principles used by the TTC were [from the presentation at page 5]:

These principles lead to updated stop poles looking like this:

The pole shows the mode(s) serving the stop, whether the vehicles are accessible, the route numbers of all services, and the stop number for NextBus text messages.  The overall legend is: 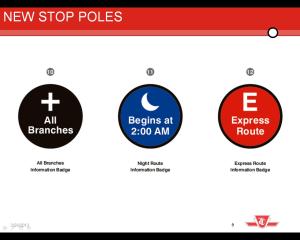 Notable by its absence is any redesign of the schedule information posted at many bus stops.

The system maps are to be replaced with a hybrid local area map that includes, in diagrammatic format, selected information about routes beyond the local map.

Here is a view of a full map for one stop:

(A high resolution view of one such map has been posted by blogTO on Flickr.)

The centre of the new map is a local area street map overlaid by routes and showing the location of the stops. Except for the subway lines and the “You Are Here” pointer, there is no colour coding within this box. 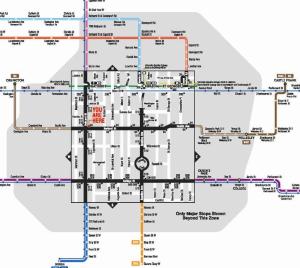 In the lower right is a subway map to which is added the routes passing through the local box. This is a very strange way to show routing information because it is far from geographically accurate, and gives no sense of the wider system of which these routes are a part.

Finally, in the lower left, there is a legend which is supposed to show the periods of service during which each of the various routes and sub-routes operates.

These maps fail on many criteria, not least of which is that they completely replace a city-wide view of the system. Moreover, one of the more important components, the local area map, occupies so small a space that it does not have room to add notations or graphics for major points of interest. At the TTC meeting, there was a request from one Commissioner for Bixi locations, and obvious additions would be hospitals and other major public buildings. The local map will get very crowded very quickly.

By giving so much real estate over to the outlying parts of routes that happen to pass nearby, a vast amount of space is precluded from use for information people might actually want. This layout will become extraordinarily complex at places like Finch and Yonge where “nearby routes” stretch across the entire city and reach down to the waterfront, not to mention the effect if York Region services are added.

The hours of service legend is meaningful to someone like me, but it will definitely confuse a casual browser. What is completely missing is any sense of service frequency. Indeed, one might get the impression that the Davenport and Dupont buses are just as important as the three streetcar lines (Carlton, Bathurst and Spadina) that are also shown, but in fact they run infrequently. The white fine line along the routes is intended to show “limited hours of service”, and one can refer to the legend to see exactly when the routes do not operate. However, both of these routes are infrequent.

This brings me to Jarrett Walker’s concept of “frequent service maps” that show the network from a point of view of major and minor routes based on frequency. There may be many roads to Rome, but only one of them will get you there without a tedious series of transfers and waits. See Walker’s articles here, here, here and here.

The TTC, in abandoning its system map, has missed the opportunity to show people the hierarchy of its routes, which will provide fairly reliable, frequent service, and which require a timetable and NextBus to improve one’s odds of actually finding a vehicle.

For more commentary on this issue, please see Sean Marshall’s article on Spacing Toronto and Chris Bateman’s on blogTO.  There are additional views of the maps in Steve Kupferman’s article on Torontoist.

The TTC will be seeking feedback on the new designs, and I am sure they will get an earful.

For long-time aficionados of TTC signage, we can start placing our bets on how long it will take for this detailed level of information to go out of date if the TTC makes no provision for ongoing maintenance, or relegates this to a “maybe next year” status.