Updated July 2, 2020: The contract award for this work will be before the City’s Infrastructure & Environment Committee on July 9, 2020, and then it will go to Council for approval at its meeting of July 28-29, 2020. This is a complex multistage project stretching over three years.

This includes the reconstruction of the TTC track allowance and platforms, roads, sidewalks; construction of new streetscaping; replacement of watermains, sewer relining; and the rehabilitation of The Queensway bridge over Parkside Drive.

Part of the work is planned for 2020 and was already awarded under another contract. This will not affect streetcar or road traffic.

In order to reduce the overall impact of construction on all road users in the area around Parkside Drive, the underside of the Parkside Drive bridge at The Queensway will, therefore, be completed in 2020 in conjunction with the Dundas/Howard Park and Howard Park (Sunnyside Avenue to Parkside Drive) project. This bridge substructure work includes abutment repairs, recoating structural steel, reconstruction of the TTC stairs and concrete patch repairs to the TTC owned portion of the bridge.

Major works begin in 2021 and these are divided into phases. The TTC has not yet announced the transit service arrangements corresponding to each phase

While this work is in progress, access to and from Roncesvalles Carhouse will be available only from the “north gate”. With the intersection closed, the 501 Queen and 504 King services will not be able to operate west of Dufferin Street. How much of the routes are converted to bus operation remains to be seen, but the TTC would be wasting vehicles if they converted two major routes for work that would not affect their entire length. Track replacement is also planned on Queen from University to Fennings (near Dovercourt) in 2021, and so it would make sense to retain streetcars at least on the eastern half of that route, and on King to Dufferin Loop.

From this description, it is unclear which portions of the work will actually extend into 2022, and for what period the intersection will be impassible. That would determine the period during which streetcar service on the west end of Queen and King would have to be suspended.

This stage involves Roncesvalles Avenue north from Queen including the North Gate at the carhouse. While this is underway, streetcars would not be able to operate on Roncesvalles, but should be able to use the South Gate.

I have sent a query to the City for clarification of the staging of this project.

Correction: This item was to have been approved by Council at its April 1, 2020 meeting, but that was cancelled. The item is still pending approval.

Update: This item was approved by Council at its meeting of April 30, 2020.

Toronto Infrastructure and Environment Committee recently approved the long-awaited changes at the intersection of King, Queen and Roncesvalles, and on The Queensway to occur in 2021. The detailed construction staging plan is not yet available, but the overall plans were part of the city’s report. This work had originally been planned a few years back, but was delayed for various reasons including conflicts with other  projects and the desire to bundle all works affecting this area in one major undertaking.

This intersection, which has been the subject of iconic photos in the TTC’s history, will be reconfigured as shown below. The biggest change is the realignment of the approach tracks from King Street so that they meet Queen Street in a conventional 90 degree configuration rather than the angled approach today. At the same time, the eastbound traffic channel that allows traffic to slip past the intersection onto King Street will be removed.

The eastbound carstop will be moved farside with a bump-out platform similar to those used on Roncesvalles Avenue.

The eastbound approach to the intersection will include four lanes: streetcars (reserved), left turns, through, and right turns. With the farside eastbound carstop, it is clear that the City is not anticipating a lot of through traffic. Traffic signals will be changed to use only two phases rather than the lengthy three-phase cycle now in place.

This arrangement greatly improves the safety for pedestrians crossing to and from the southwest corner of the intersection which provides access to the bridge over the Gardiner to Sunnyside Beach.

The stops north of Queen will be modified with bump-out curbs as on the rest of Roncesvalles north to Dundas so that there is direct loading from the sidewalk into the streetcars. The northbound stop will be shifted to Grafton Avenue rather than being just south of the entrance switch to the carhouse at it is today.

The Queensway from Parkside to Sunnyside

The right of way currently ends just west of Claude Avenue where streetcar and auto traffic merge. In the new design, the reserved lanes continue east on The Queensway, and it will no longer be possible to exit from Claude southbound to The Queensway eastbound. Northbound access is already barred by a turn restriction eastbound.

The bicycle lane on The Queensway eastbound that now becomes a sharrow just east of Parkside will be extended to Glendale Avenue.

There will be a break in the right-of-way at Glendale to permit turns. This is the existing stop serving St. Joseph’s Hospital, but it will be changed so that the westbound stop is farside rather than nearside. The new stops will be designed to accessible standards.

A new left turn lane will be added eastbound at Glendale.

A short section of sidewalk will be added on the south side of The Queensway at the Glendale intersection, although it only spans the width of the intersection. This has always been difficult stop for TTC riders when buses replace streetcars because their waiting area is unpaved. 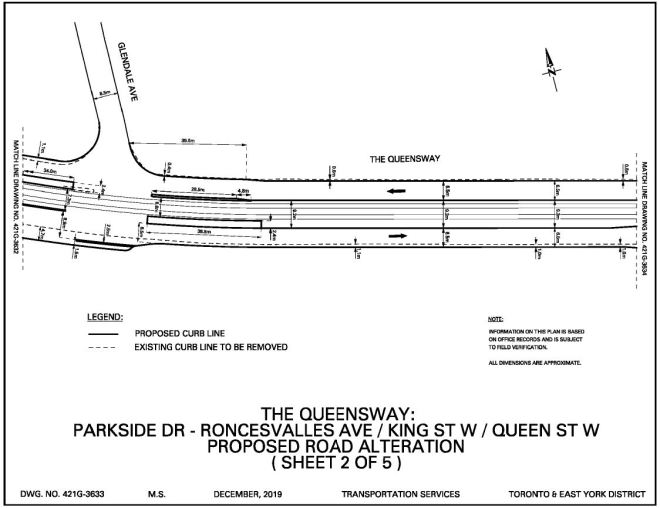 Traffic signals will be added at Sunnyside Avenue to control movements across streetcar lanes, and to aid streetcars leaving the loop. A new left turn lane eastbound will be added.

In the early 1920s, the TTC inherited the worn-out track of the Toronto Railway Company and set about rebuilding everything to then-modern standards. The intersection at King, Queen and Roncesvalles was the single largest project, and there are many photos of this in the City Archives. Here are a few.

Looking southeast into King Street from the northwest corner at Queen Street. This approach to the intersection has been in this configuration for well over a century, but it will change with the planned work in 2021. Sunnyside Station is on the right edge of the photo. 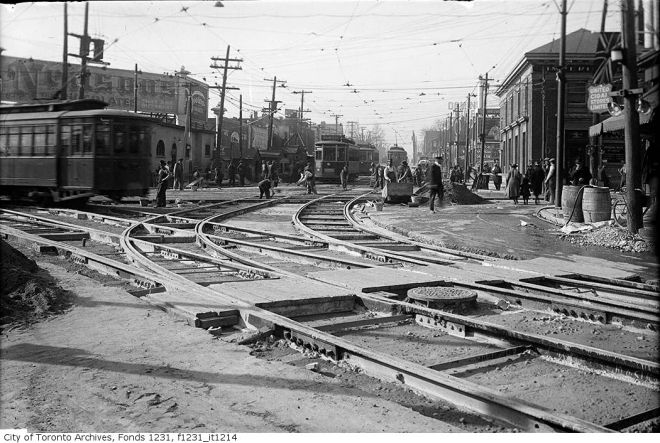 Looking westward down onto the intersection. The track layout is quite different from today because the TTC’s Roncesvalles Carhouse did not yet exist (the TRC building was further north and the primary access was from Roncesvalles Avenue). There is no fan of tracks into the car yard from Queen Street. Also, of course, many tracks – from King, Queen and Roncesvalles – lead to the Sunnyside Bridge to Lake Shore Boulevard West and Sunnyside Amusement Park. Queen cars operated via Lake Shore to Humber Loop which was east of the Humber River on Lake Shore Road.

This leg was removed with the construction of the Gardiner Expressway and the realignment of streetcar service north to The Queensway where it runs today.

Looking northeast from the Lake Shore Bridge into Queen Street.

Looking east on Lake Shore Road at Sunnyside. The streetcars ran along the north side (to the left). The intersection of King, Queen and Roncesvalles is visible in the distance just to the left of the centre of the photo.

Looking south on Roncesvalles at the carhouse north gate

Looking west on Queen to Roncesvalles

Looking west on Queen to Roncesvalles

Looking east on Queen to Roncesvalles

Looking east on Queen to Roncesvalles

Looking west on Queen from Roncesvalles

35 thoughts on “Planned Changes to King, Queen, Roncesvalles and The Queensway for 2021 (Updated)”