This is the first of three articles updating information in my series of posts last fall [Part I, Part II, and Part III] with data to March 31, 2020.

As I have worked through the data, I cannot help having the sense of looking back at a very different city, one that had busy streets full of transit riders. This will return, eventually, but it will be a long climb that has much more to do with scientific advances in disease control than transportation planning.

The effect of the city’s shutdown is evident in data for March 2020 as traffic and riding disappeared, and so, to some extent, did service.

The charts in this article all have the X-axis at the 10 minute line to give more space for the data which lie above that mark.

Other than a few spikes from delays and diversions, the travel times continue on the same pattern for previous months. Although the TIFF spike shows up in these charts, this lies outside of the six-month period under review here. Please refer to the previous articles that include September 2019.

There are two dips in recent data, one for the Christmas break period when traffic is lighter than normal, and one for the Covid-19 period.

The PDFs linked below contain all of the charts from this article.

The charts below show the travel times for eastbound trips between Bathurst and Jarvis for trips crossing Bathurst between 8 and 9 am. They are shown on two timescales:

A point from past analyses worth repeating here is that little change in travel time was expected during the AM peak when the pilot went into effect for the simple reason that King Street was not congested during that period. The effect shows up much more strongly later in the day. The more important change, visible moreso in data for later in the day, was the reduction in variability in travel times.

In cases where the lines drop to the X-axis, this is caused by a service disruption/diversion that meant no cars crossed Bathurst eastbound (or Jarvis westbound) during the hour. On February 28, service diverted via Queen Street due to a collision and there were no trips between Bathurst and Jarvis during the 8-9 AM period.

On February 13, there is a spike of over 40 minutes in the 85th percentile of travel times caused by severe congestion east of University Avenue that persisted from about 9 am to 10:40. There was no TTC eAlert issued explaining what was happening probably because this was the same morning the TTC was dealing with a work car derailment on the subway. 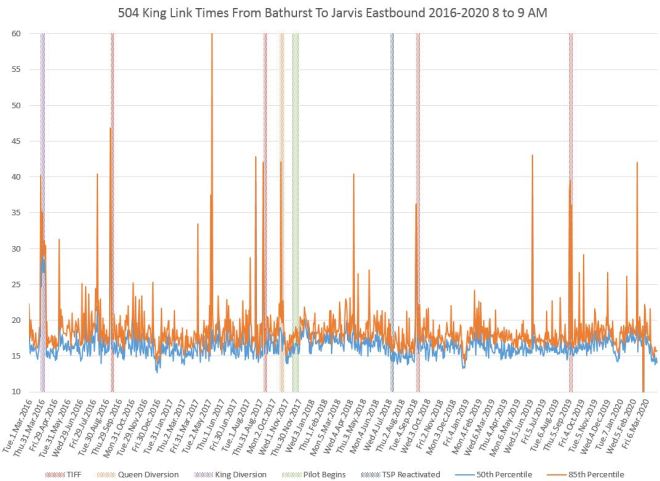 The westbound data are similar. I have only included the 2016-2020 chart here, but the full chart set (linked later in the article) includes the 2019-2020 westbound charts. 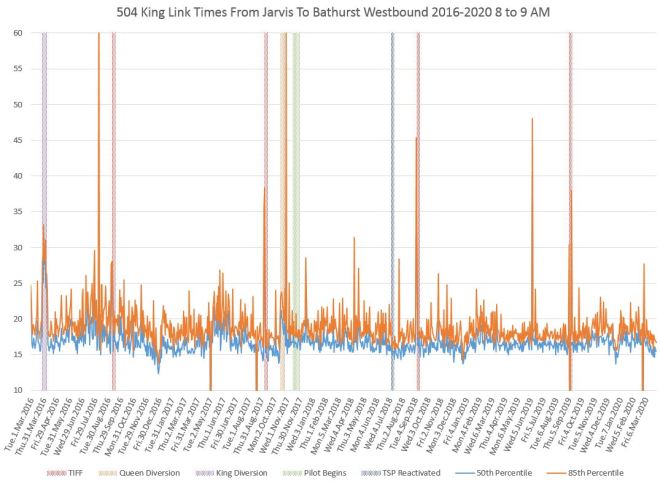 On January 7, there as a diversion via Queen Street due to a demonstration. The spike in travel time shown here was due to cars trapped before the diversion started.

On January 24, there was a diversion due to a collision. Some cars were held resulting in the spike in travel times that day.

On January 28, a car was held just east of Yonge Street. There was no diversion, not also no eAlert to indicate what the  problem was.

The spike on January 7 corresponds to the same diversion/delay for a demonstration noted above.

The spike in travel times both ways on October 15 was caused by a demonstration that held some cars. Service diverted via Queen Street.

The demonstration on October 15 continued to delay/divert service both ways. 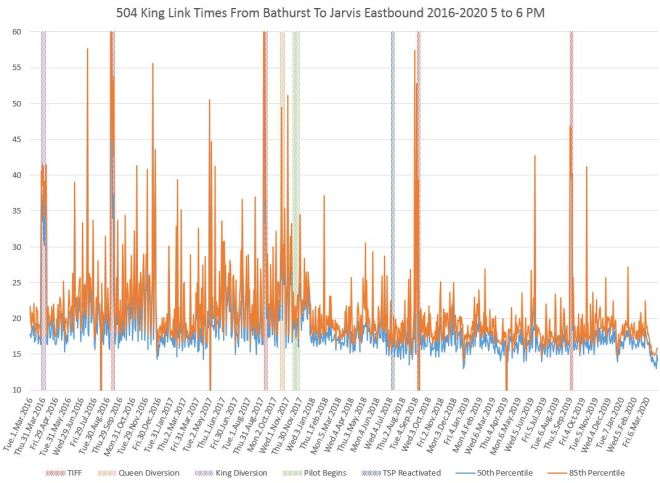 On December 13, two delays affected service through the early evening. One delay was at Church due to a security incident, and the other was an extended delay and diversion at John Street for which no eAlert was issued. 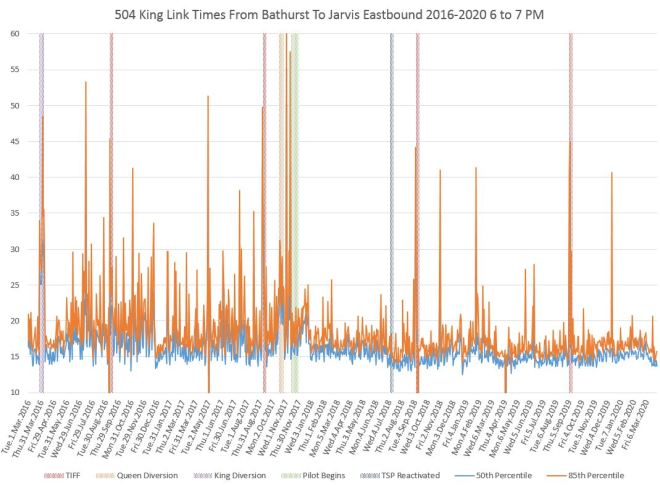 On December 9 there was a collision westbound at Spadina, and service was diverted.

On February 21, there was an extended delay and diversion through the evening due to falling scaffolding. 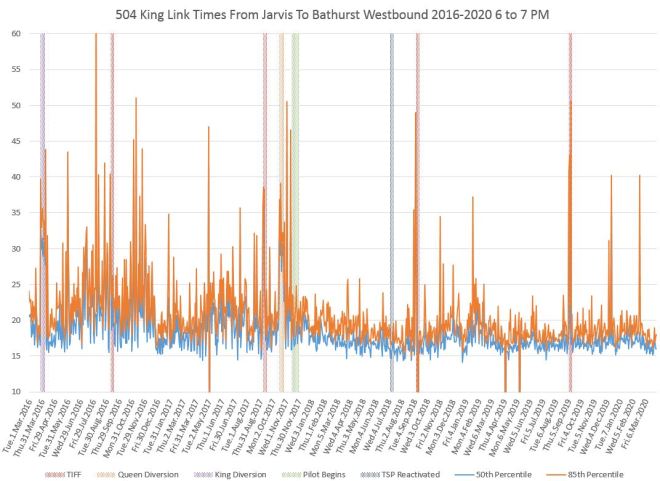 On November 25, there was a delay and diversion due to an unspecified mechanical issue at Spadina which held service both ways.

The February 21 spike is a continuation of the event described above. 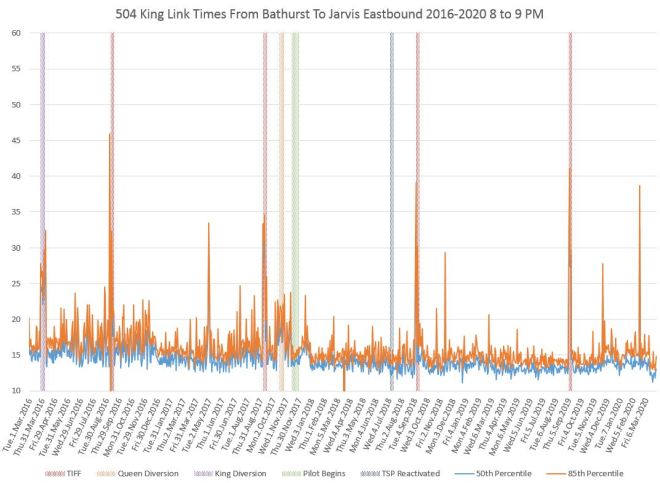 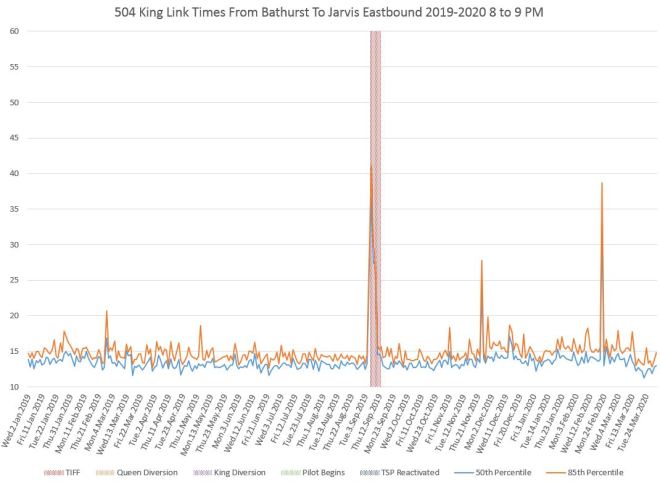 On March 17, an unspecified mechanical problem caused a delay and diversion through much of the late evening, both ways.

During January 2020, late evening travel times rose due to congestion in the Entertainment District, primarily between Spadina and Bathurst westbound, and from Spadina to John eastbound. 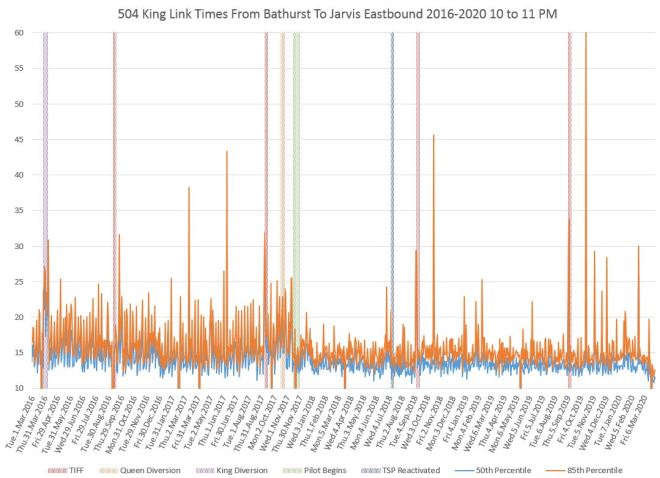 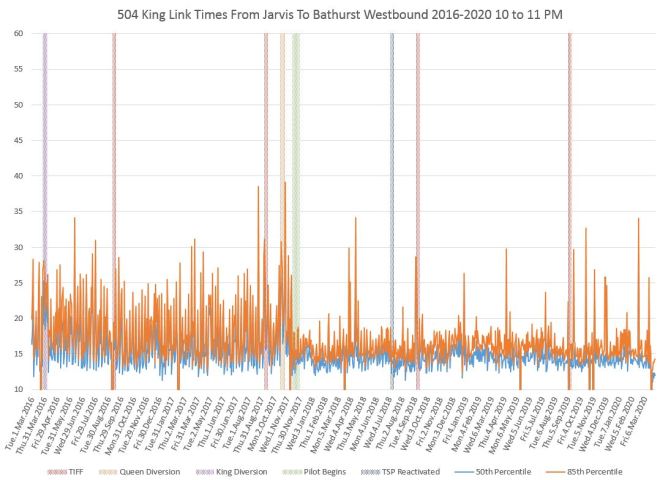 One thought on “King Street Update: March 2020 Part I”