In this, the final part of the series reviewing operations on the King Street corridor, I present updated charts showing the capacity of service offered at various locations along the 504 King route since March 2016, and a history of schedule changes there since September 2017. The capacities shown are based on actual day-to-day operations and can vary a great deal from the scheduled offerings.

The values shown in the charts below are based on the TTC Service Standards design values for average vehicle loads during the peak period. It is physically possible to carry more riders, but service is supposed to be arranged so that on average crowding is at these levels. There is always a trade-off between packing more people onto cars and buses, and the extra travel time this triggers with people pushing by each other to board and alight vehicles. “Efficiency” is not necessarily a question of getting the most sardines into every can.

For each location discussed here, the peak hour chart showing 8-9 am in the morning or 5-6 pm in the evening is included in the article, but a set of PDFs at the end of the section contain hourly charts for the four hourly periods from 6-10 am and 3-7 pm for those interested in the shoulders of the peaks.

The capacity operated on Roncesvalles Avenue from Dundas West Station in the AM peak hour has been quite consistent for the past year except for a few dips, notably during the very cold winter in January-February 2019. This shows that most scheduled service is actually reaching the end of the line most of the time.

The day to day variations are for the most part equivalent to one car’s capacity (130 for a Flexity LFLRV). Eleven cars are scheduled to leave during this hour for a capacity of 1,430, but it would be easy to have one more vehicle slip from the previous hour into this window if it were slightly behind schedule giving a total of 1,560. (There is a similar pattern in the 7-to-8 AM chart which is included in the PDF sets below.) 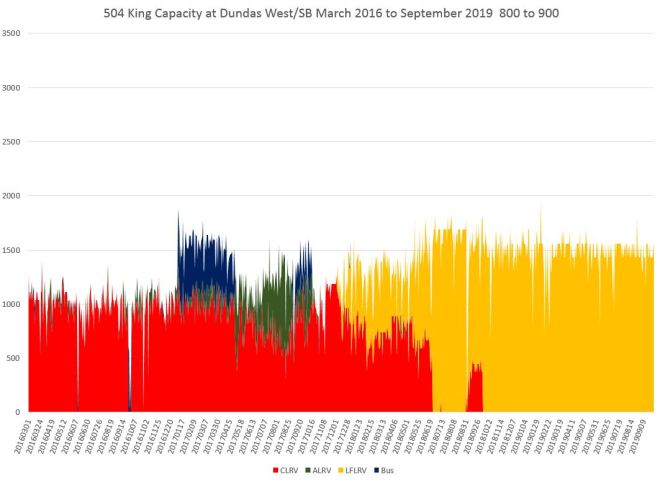 The data eastbound at Jameson show the effect of additional 508 Lake Shore trippers at this point which added three more cars during the peak hour, or 390 to the capacity of the combined service. 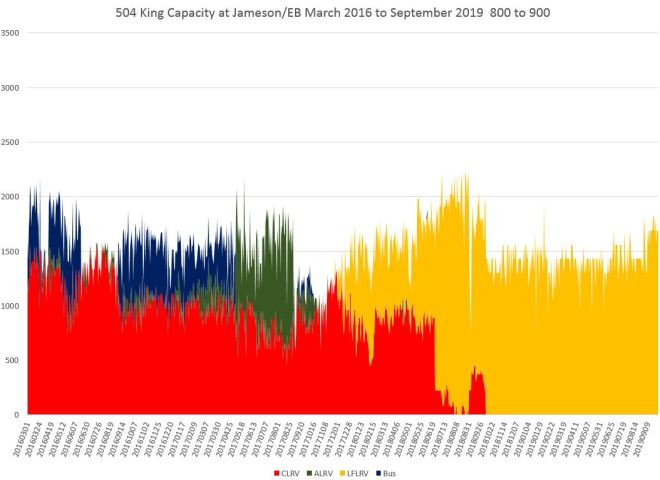 The effect of 508 Lake Shore is also visible at eastbound at Bathurst, but of more concern is the raggedness of this chart and the routine fluctation between roughly 2,500 and 3,000 passengers per hour capacity day-to-day. King may benefit from a more reliable trip through the core, but service originating outside of the transit priority area is still subject to fluctuation in capacity.

The capacity operated south on Broadview from Danforth, like its west end counterpart at Dundas West, has been quite consistent for the past year. 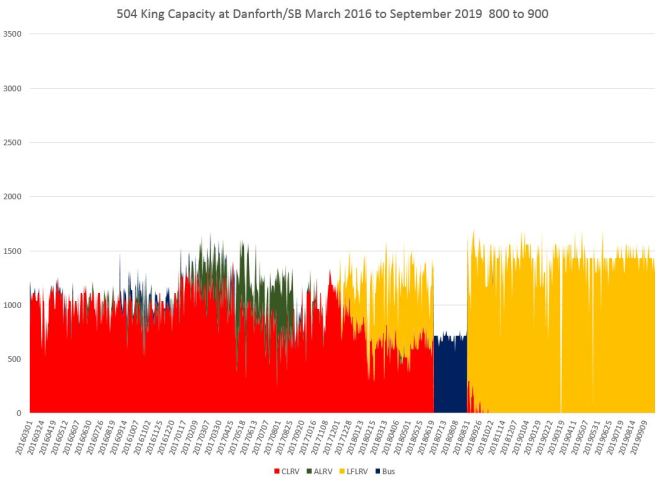 By the afternoon rush hour, service on most transit routes is less well-organized than in the morning because of the accumulated effect of traffic conditions through the day. Westbound capacity at Yonge Street during the peak 5-6 PM hour varies considerably from day to day although the 508 Lake Shore trippers have contributed since September 3, 2019. Three of these cars are scheduled to pass Yonge westbound during the hour. 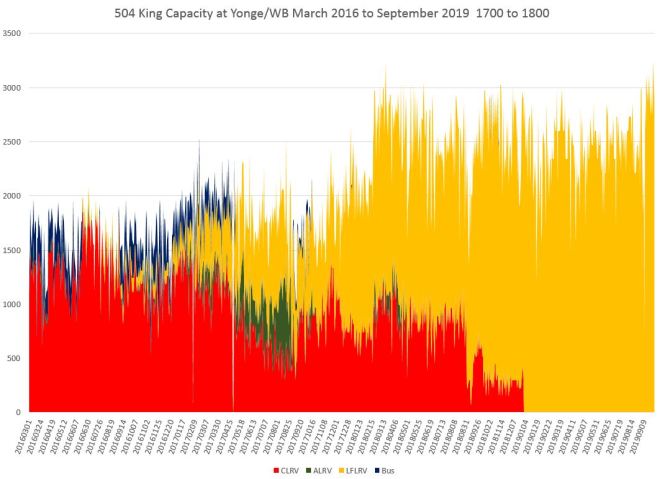 The capacity at Bathurst Street is slightly different from that at Yonge due to turnbacks at Spadina either on scheduled basis (503 Kingston Road for a time) or otherwise. 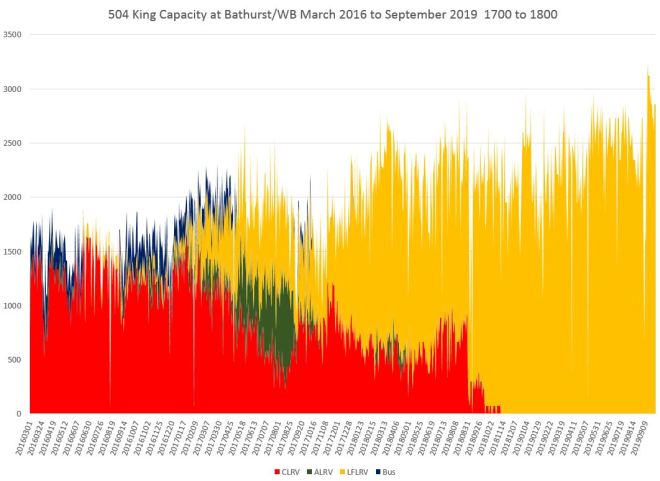 Capacity at Jameson westbound shows two effects. In the latter half of August, the 504B Dufferin Gate service was rerouted to Roncesvalles, and so more cars crossed Jameson. In September, the 508 Lake Shore service added three cars during this hour above the basic 504A Dundas West service. 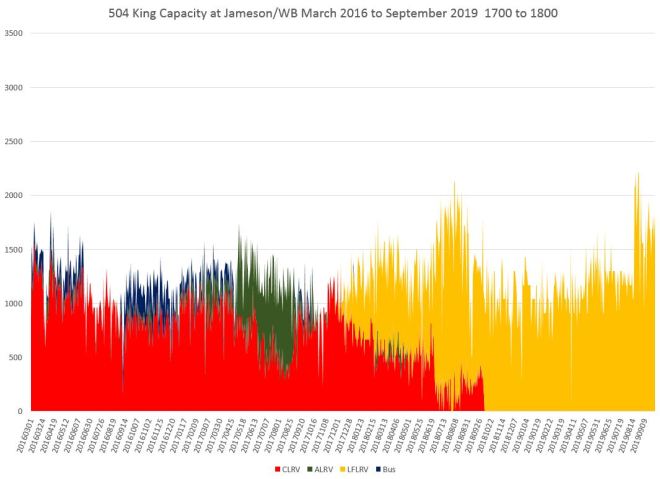 This section describes the evolution of service on 504 King and related routes (514 Cherry, 503 Kingston Road and 508 Lake Shore) for the past two years. The details of service, running times and cars operated appear in the table linked at the end of this section.

Service on King was provided by CLRVs (the shorter of the older streetcars soon to be retired from the fleet) on the 504 route operating between Dundas West and Broadview Stations, the traditional King route for much of the past century. This was supplemented by the 514 Cherry route between Sumach and Dufferin Streets using the low floor Flexity cars. Trippers, mainly buses, added service during peak periods. The 503 Kingston Road service operated only to York Street and used buses because of the streetcar shortage.

The 501 Queen service diverted to King Street for track work. During this period, the bus trippers on 504 King were removed so that the vehicles could be used for shuttle service on Queen.

The Queen service went back to its normal routing, and the bus trippers came back to King. The pilot transit priority project was implemented in mid-November, but the TTC did not make any schedule changes for several months while evaluating the effects.

The tripper service on King was changed to use ALRVs, at least according to the schedule summary, although CLRVs sometimes substituted for these trips because of the declining availability of working ALRVs. The 503 Kingston Road service reverted to streetcar operation with CLRVs, and was extended to Spadina (Charlotte Loop) because Wellington Street was impassible due to construction.

The conversion of 504 King to low floor Flexity operation officially begins in the schedules with a mix of CLRVs and Flexitys during weekdays, and all Flexitys on weekends. All King trippers were scheduled to use CLRVs.

This was also the point where the TTC shortened running times and slightly improved headways to reflect the effect of the King Street Pilot. Because the actual time saving through the pilot area was small in proportion to the full round trip time, the headway changes were minor.

During the summer of 2018, a completely new service design was used because Broadview Avenue was closed for major track work.

This design was a prelude to conversion of the route structure to the scheme now in use.

Service on King reverted to February 2018 levels and route design, but with few trippers (only two AM ALRV runs), and the migration from CLRVs to Flexitys continued. 503 Kingston Road remained as a streetcar operation with CLRVs with York Street as their western destination. 514 Cherry returned, but this would be the last period of its operation under that name.

The restructuring of 504 King into its current 504A (Dundas West – Distillery) and 504B (Dufferin Gate – Broadview) services was instituted, and route name 514 Cherry went into the history books. Low floor Flexitys were scheduled during all periods except the peaks when some CLRVs were used to supplement service.

The conversion of 504 King to completely low floor service was officially recognized in the schedule. Route 503 Kingston Road reverted to bus operation.

As part of a system-wide review of schedules, travel and recovery times were extended on 504 King. This was done primarily by adding cars while keeping headways unchanged on weekdays, but on weekends there was a mix of slightly wider headways and added cars during various periods.

504B Dufferin Gate service was rerouted to Sunnyside Loop after 9 am, but there was no change in the schedule or running times.

Routes 502 Downtowner and 503 Kingston Road were consolidated on the 503 routing operating to York Street due to construction at Kingston Road and Queen, and possibly as an experiment for future service redesign. This arrangement will continue until mid-November 2019.

Notes about this summary:

Dec. 22, 2020: The TTC 2021 Capital Budget article has been updated with illustrations from the Board meeting presentation.

Dec. 21, 2020: The TTC 2021 Operating Budget article has been updated with illustrations from the Board meeting presentation.

Dec. 14, 2020: Illustrations of the Eglinton East LRT plans have been replaced with better resolution versions.