CEO Rick Leary has stated on a few occasions that the buses now on streetcar routes will come free for service on the bus network by year end when all new cars have arrived, and that all of the legacy CLRV/ALRV (standard sized and two-section articulated cars respectively) will also be retired this year. This directly contradicts his own Capital Investment Plan which shows that buses will still be required into the mid-2020s when, in theory, a further order of 100 streetcars would arrive.

However, even assuming that Bombardier does deliver the last of its order up to car 4603, there will not be enough new cars to cover service on all of the lines. The table below compares service as it existed back in 2006 before the new cars were ordered, the TTC’s plans for Flexity implementation in 2013, the current schedule requirements, and the number of streetcars needed if all routes return to rail operation.

The numbers above are divided into six sets:

For the purpose of this discussion, the ALRV fleet is assumed to have been retired even though, officially, schedules still call for five of them to run on 501 Queen. In practice these, and some CLRV runs, are operating with Flexitys.

The total fleet requirement including spares at 20% would be 216 cars, and this is 12 more than the TTC will actually have without allowing for a half-dozen cars undergoing major repairs. This means that it is impossible to operate the streetcar system without either trimming service or leaving buses on some routes. When there are construction projects that block streetcar service (such as the work by Toronto Water now underway on Dundas), there would be enough cars operate the rest of the network. Otherwise, the most likely candidates for buses are the perennial targets, the Kingston Road services 502/503.

Some routes – King, Spadina and St. Clair – have more service today than the 2013 deployment plan provided, but this means that there are not enough cars to handle the rest of the network as originally planned. Service improvements on the streetcar system are limited to the added capacity that Flexitys will provide on routes still using old cars (e.g. Queen), but there is no headroom from 2020 onward.

In the 2018 Capital Budget, the TTC planned to acquire 60 more streetcars in 2019-20 for ridership growth, and 15 in 2020-21 for new Waterfront service. In 2019, this has changed to a larger order in the mid-2020s. However, the budget is inconsistent in its presentation of needs and timing.

The chart below is adapted from the fleet plan as it appears in the budget. (The copy I have is in black and white muddying some details depending on colour.) This shows a proposed purchase of 95 cars in 2025-28. It is already out of date because the CLRV and ALRV fleets will be retired sooner than planned. This creates a shortage that prevents full return to streetcar service at the end of 2019 when the Flexity deliveries are supposed to be complete.

Projections out to 2043 show a very substantial increase in the streetcar fleet to almost double the planned fleet in the early 2020s. That’s a lot more streetcar service than we have today. However good this might look, it does not address the challenge that there are not enough cars for the lines and service levels today, and this will not change in the near future.

A few pages later in the budget is a project to purchase 60 new cars which clearly shows the need for 60 cars starting in 2020, with even more in the future. Of particular note is the text about the effect of deferral on service. This project description is obviously out of date, but that is a common problem with the budget.

The actual spending has been moved to 2024-27. It goes without saying that whatever the date, this is an unfunded project. 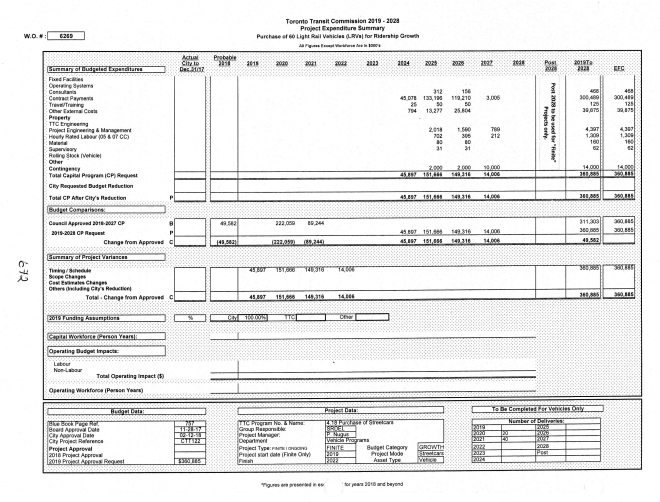 Adding to the inconsistency is the statement in the 15 year Capital Investment Plan that the TTC would purchase “approximately 100 additional streetcars from 2025 to 2028 to meet demand, at a cost of $510 million”. [p. 54]

A further problem lies in the planned renovation of Russell Carhouse to handle Flexity maintenance similar to the work now underway at Roncesvalles. This will take that site out of operation for two years. Without Russell’s capacity, there would not be enough room to accommodate the extra 60 streetcars if they were procured as originally planned.

The TTC is also considering major changes at Harvey Shops which, as currently configured, can only be used for a small number of Flexitys. The scheme is to revise the layout of tracks and service areas, and to make this an operating site for, at least, the fleet needed on 512 St. Clair. This would very substantially reduce the dead head mileage for 512 St. Clair cars that shifted to Roncesvalles Division from the carhouse at Wychwood, only a short distance north of Hillcrest, in 1978. However, this capacity would not be available until 2028, and the Fleet Plan shown above does not include it. That site would also substantially increase storage capacity on the streetcar system because, in another project, the TTC proposes shifting bus maintenance operations to a new as yet unknown location. This is separate from the construction of another bus garage in the 2020s.

All of this assumes that money will be found to pay for the larger fleet and facility changes needed to accommodate it. In the chart below, all figures are in billions of dollars including inflation. Note that the $370 million for the current 204-car purchase is the remaining money to be spent in years that are part of the Capital Investment Plan, not the total project cost. 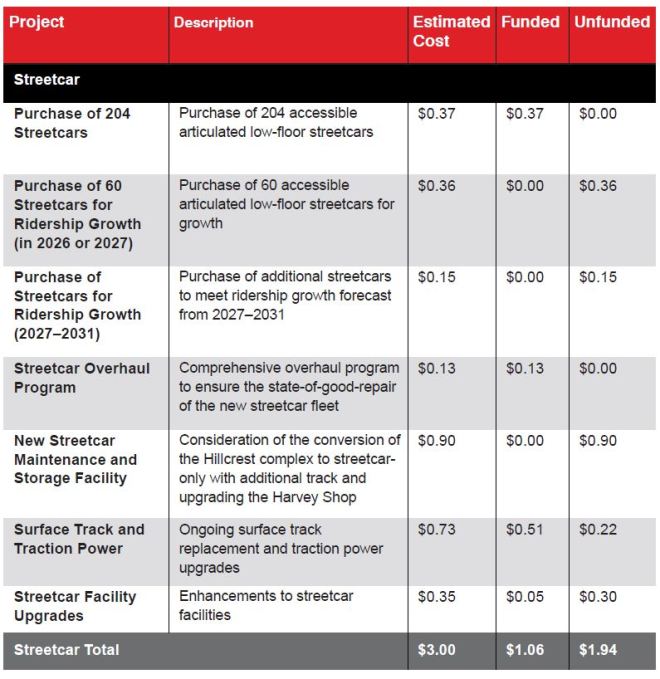 The TTC clearly has plans to improve and expand the streetcar system, but there is a deadly combination of constrained capacity growth and rising demand which will not be addressed in the short-to-medium term. That drives potential riders away from transit and adds traffic that streets cannot absorb more demand.

For many years, growth in bus service has been limited because the TTC has no place to put more buses even if they bought them. This allowed TTC management to avoid the basic issue of how much service was really needed, and budget hawks on Council to avoid increasing TTC subsidies to pay for this.

The chart below is adapted from the fleet plan in the capital budget. The first column shows the fleet makeup before 2014 and then shows the procurements and retirements over the period to 2034.

The projected service requirements have changed since the 2018 version of the plan, and both versions are shown in the chart. Four planned major events will reduce bus requirements:

The use of articulated 18m buses will increase by 68 vehicles in 2021 if this plan holds. The next round of artic purchase in 2025-26 will replace the 153 diesel artics now in the fleet, but there are no net additions.

With the shift of the bus fleet to electric operation, the TTC plans to convert its garages at a rate of two per year. However, they have not produced a plan that aligns this conversion with the rate at which electric vehicles will replace diesels and hybrids.

Garage space continues to be an issue. The current capacity across seven garages is 1,631 buses compared to a total fleet of 2,012, a shortfall of 381. Even when McNicoll Garage opens in 2020 adding capacity for 250 buses, there will still be a shortfall with system capacity of only 1,881. A ninth garage to add a further 250 spaces is not planned to open until 2031. That garage, like many projects, sits in the “out years” of the capital plans so that it does not contribute to the shortfall in available funding over the 10-year span of the budget.

This puts the TTC and its would-be customers in a long-standing box when looking at service improvements. For another decade, Toronto will be told that there is no room for more buses beyond the current fleet plans. The planned growth in peak service from 2026 onward is under one per cent per year.

TTC management plans to bring forward a service plan later in 2019 which will examine future demand. A vital part of such a report will be to look not just at minimal ridership and fleet growth, but to consider what happens if service improves at a substantial rate. Oddly, there is provision for this in the streetcar fleet plan, but not in the bus plan.

The 15-year Capital Improvement Plan includes construction of a collision centre and heavy overhaul facility for the bus fleet. This would release space now used at Hillcrest allowing it to be repurposed as a new streetcar shops and depot. The engine shops now at Hillcrest would become obsolete with the migration to an all-electric bus fleet.