Updated September 5, 2018: A history of service levels on Queen Street back to 1954 has been added at the end of this article.

While Toronto celebrates the success of the King Street Pilot, only a few blocks away on Queen Street transit service is not quite so rosy. Like much of the transit system, service on 501 Queen has not changed substantially over the years, and this has been compounded by various construction projects that disrupted service and fragmented the route.

One long-standing issue on Queen has been the type of vehicle assigned to service. Until February 2018, the service design assumed that the two section Articulated Light Rail Vehicles (ALRVs) would operate. However, it had been common for years to see the smaller CLRVs mixed in to the service despite their lower capacity. This was a direct result both of declining ALRV reliability and the concurrent use of these vehicles on other routes, King and Bathurst.

The February 18, 2018 schedules specify a mix of CLRVs and ALRVs on 501 Queen, and provide shorter headways (the time between vehicles) to compensate for the lower vehicle capacity. However, even this change did not completely fix the problems.

Although the ratio of service design capacities is about 3:2 for the two vehicles (108 vs 74 during the peak, 61 vs 42 off-peak), and 10 of the 35 cars on 501 Queen were scheduled to be ALRVs, the change in headways did not compensate for the lower average capacity. In the table below, the “after” vehicle capacities are a weighted average of ALRV and CLRV standards based on the proportion of vehicles scheduled. In practice, the TTC rarely achieved this ratio, and the capacity actually operated was lower. (Note that “capacity” here is the service design load, not the crush vehicle capacity.)

When streetcar service returned west of Humber Loop, the scheduled service on the Neville-Humber portion was not changed. On the Long Branch portion, the service design calls for 7 CLRVs weekday daytimes supplemented by 5 AM Peak CLRV trippers that operate through to downtown. (These will be discontinued in September due to the shortage of cars.) In practice, at least one of the cars operating west of Humber is typically an ALRV, sometimes more, even though these vehicles should be on the Humber-Neville service.

With the declining availability of ALRVs, if the present schedules are operated with 35 CLRVs rather than the 25+10 CLRV+ALRV mix now planned, the scheduled capacity is further decreased.

During July 2018, there were only 12 ALRVs operated in service at various times, and some of these disappeared as the month wore on. Some of these cars, notably 4207, were assigned to the AM peak trippers to conserve their limited availability. 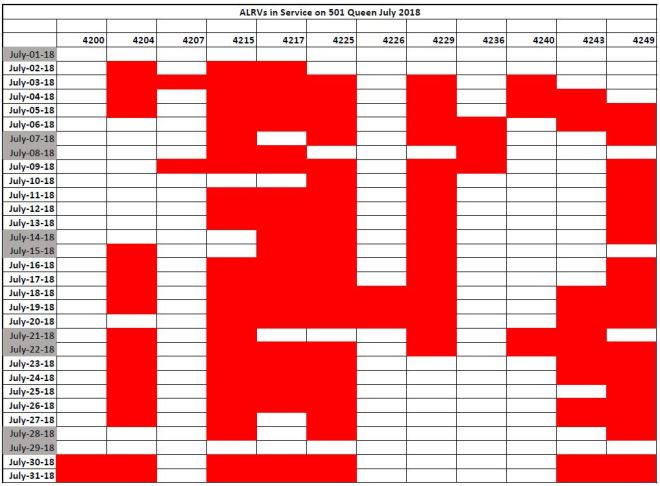 I wrote to the TTC’s Brad Ross to inquire about plans for service and capacity on Queen Street. Here is his reply:

1) The reduced availability of ALRVs in recent weeks is due to a deep inspection of the entire fleet to assess their condition, which is not good.

Service Planning is working at making further changes to the Queen route in the new year that assumes no ALRV availability to ensure that we are operating adequate capacity. If ALRVs are available, they would operate either as trippers or replace a CLRV as “bonus” capacity. All of our advance planning for construction service on Queen in 2019 assumed CLRV-only operation and was budgeted accordingly.

2) 501 QUEEN will be the next route to receive the new streetcars after the deployment on 504 KING is complete at the end of 2018. They will be deployed 1-for-1 to CLRVs and the proportion of service operated by low-floors will vary throughout the year as construction at King-Queen-Roncesvalles progresses and the streetcar portion of the route is adjusted.

The detailed plans for staging the trackwork at Roncesvalles as well as the reconstruction of The Queensway with reserved streetcar lanes west to Parkside Drive (the eastern limit of the existing right-of-way) have not yet been released. Riders can expect various replacement bus services, again, from late winter through (at least) early summer.

One unhappy consequence of declining capacity is that vehicles are more crowded, take longer to load, and discourage more riders from even trying to use the TTC. Lost riders are hard to recover, and incentives such as cheaper fares cannot compensate for inconvenience and the discomfort of packed cars.

The following section updates charts presented in an April 2018 article Service Capacity on 501 Queen with data to the end of July.

AM Peak Eastbound at Bathurst

Service capacity has been declining slowly through 2018 as the proportion of trips operated by CLRVs increases. This is only partly offset by the increase in the total scheduled cars in recent months. Note that there is considerable fluctuation from day to day thanks to irregular service.

Trippers were operated by buses on Queen eastbound early in the year. These were replaced by streetcar trippers that were extended through to Long Branch once service to the west end of the line changed back from buses.

The chart below shows the actual capacity and breakdown by vehicle type operated in 2018 to the end of July from 7 to 8 am.

One hour later, from 8 to 9 am, the capacity operated is higher than in the chart above because (a) the full rush hour service is operating eastbound for the hour and (b) most of the trippers make their journeys during this period. This shows up early in the year with the bus trippers (blue).

These trippers will be discontinued in September 2018 due to the shortage of vehicles.

By the period from 9 to 10 am, two things are evident. First, the service is now provided almost entirely by the smaller CLRVs during July, and the total capacity has declined from January. This, it could be argued, is an acceptable decline for the summer, but there will not be a “bounce back” with the September schedules.

The following PDF contains the three charts above as well as extended data back to September 2015 for comparison.

AM Peak Westbound at Woodbine

The service westbound at Woodbine includes only 501 Queen, not the other 502, 503 and 504 cars and buses that merge in at Kingston Road, nor any 501 trips originating westbound from Russell Carhouse (at Connaught) or Leslie barns. The decline of capacity into the core as the proportion of CLRVs rises is evident.

The following PDF contains the full set of charts for the AM peak including data back to 2015.

The drop in eastbound capacity during the peak hour at Yonge is even more dramatic than in the AM peak charts above. Service that regularly peaked over 1,200 per hour now routinely sits around 800 with occasional peaks to just below 1,000.

Note that the occasional Flexity (LFLRV yellow) in the chart is probably not operating in revenue service, but as a test. These show up in the “live” data because the tracking systems are turned on for testing. I have left these cars in the charts on the off chance they were actually picking up passengers as extras. 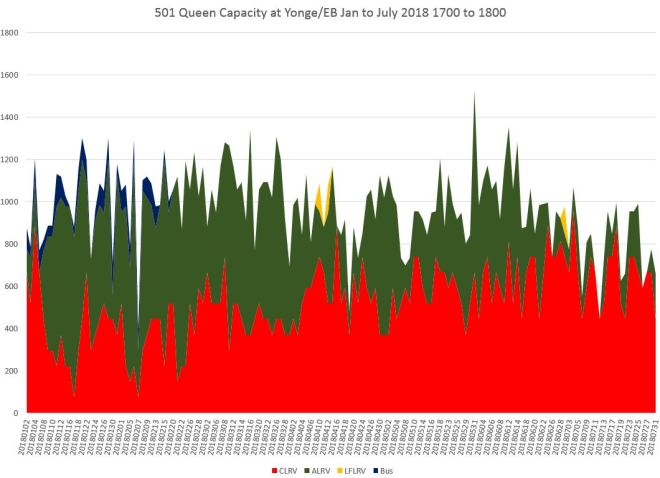 Here is the full set of charts.

As with the eastbound service, capacity has declined over the year, although it is worth noting how deep some of the troughs are during the bad weather periods in January and February.

The full set of charts:

AM Peak Eastbound at Royal York

Service capacity on the Long Branch section of the 501 has varied over time with a mix of vehicle types and service designs. When streetcars returned in late June, the capacity operated rose, but this was due in part to two factors. Some trips scheduled for CLRV operation actually ran with the larger ALRVs (green in the chart) increasing the available capacity. Also, the period shown below includes many of the peak trippers that run through to downtown. In September, ALRVs will be relatively scarce, and the trippers will be dropped from the schedule.

Here is the full set of charts:

This section was added in response to a Twitter query to show the evolution of service in 501 Queen. Where I have TTC Scheduled Service Summaries available, I have taken this back to April 1954, just after the opening of the original Yonge Subway between Eglinton to Union Stations.

In the mid-1950s, Queen was a major east-west corridor into downtown with frequent service from both directions. Peak service was scheduled every 90 seconds, and in addition to the Queen cars between Neville and Humber (now 501), there was also frequent service on the Kingston Road car (now 502 Downtowner) and the Kingston Road Tripper (now 503), as well as Long Branch trippers (later route 507, now part of 501) running through to Queen and Church from the west. The table below includes only the Queen cars.

The original Bloor-Danforth subway opened between Keele to Woodbine Stations in February 1966. Service on Queen in April 1967 remained at the pre-BD subway level. The BD extensions to Islington and Warden opened in May 1968.

From 1967 to 1977, the Queen service operated during peak periods with 2-car trains using PCCs that had MU (Multiple Unit) capability previously operated on the Bloor and Danforth streetcar lines. For several years, the trains were scheduled 4 minutes apart, the equivalent of a single car every 2 minutes. In practice, many trains especially in the PM peak were never made up (this required a daytime regular car to pick up a second unit for the peak), or they were uncoupled to allow half of the train to be short turned. The operation of trains ended in February 1977, and this allowed the TTC to provide service on the route with fewer cars in response to falling demand.

In 1990, the longer ALRVs replaced CLRVs on the route and on wider headways reflecting the larger capacity of these cars. Service on Queen has always been erratic, but the wider scheduled headway made the gaps even more noticeable. Coupled with the recession of the early 1990s, riding dropped and headways gradually widened.

In 1995, the Queen and Long Branch routes were merged with every second Queen car running through to Long Branch Loop. This change was implemented near the bottom of the recession, and allowed the TTC to further reduce vehicle requirements. (Note that although the vehicle count shown rises from 1994 to 1995, the latter version includes the former Long Branch cars.) Headways on the consolidated route were slightly wider than the previous split operation, and they were further widened as time went on.

The total peak vehicles settled down to 31 cars, but the headway gradually widened as running times were extended to counter congestion effects. (If the running time grows but the number of cars assigned is unchanged, then those cars run further apart.)

In 2016 the service was split again at Humber Loop. This allowed a small increase in service on Queen because the schedules no longer contained padding whose sole purpose was to make the merged services work out properly. In practice, the merge was typically uneven and cars operated east from Humber Loop when they showed up, not on a regulated headway.

In 2018 the schedule was reorganized to reflect the gradual loss of available ALRVs, but the assumption that 10 of 35 cars on Queen would be operated with the larger cars proved optimistic.

In summary, for the two decades from 1996 to 2018, there was little change in the frequency of Queen streetcar service. Service cuts responding to the 1990s recession have never been reversed.

The file linked below is a PDF version of the tables above.