The TTC has a proposal for reorganizing its bus service in The Junction and is seeking feedback for a report to the TTC Board this summer.

The maps below are clipped from the TTC’s site. 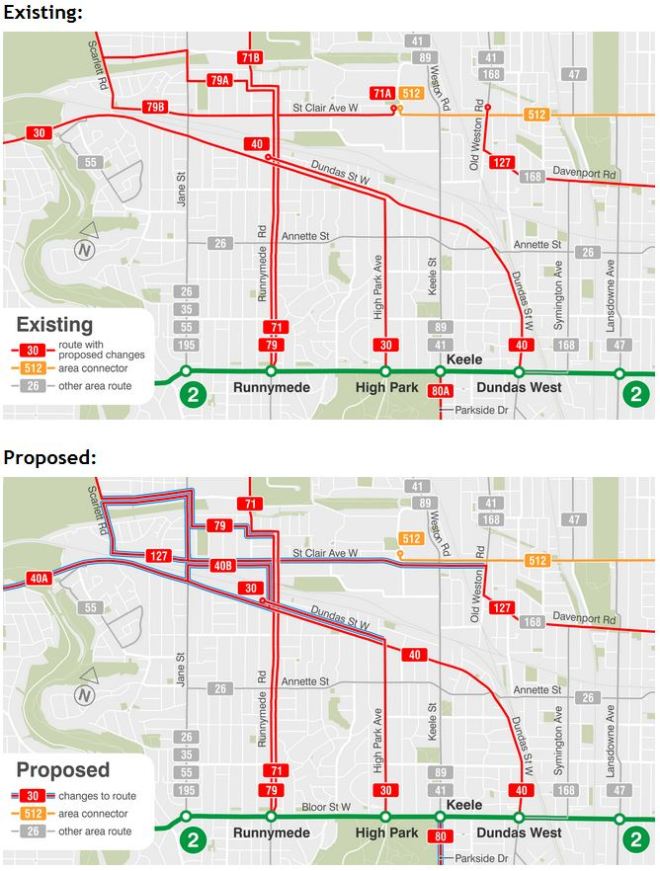 Two major changes involve creating through services on St. Clair and on Dundas:

The 80B Queensway service that terminates at Humber Loop late evenings and Sundays would be eliminated and buses would operate to Keele Station via Parkside Drive at all times. This through service to the subway was in place during the reconstruction of the loop, but the 80B reappeared on April 1 using an on-street connection to the Queen car at Windermere/Ellis.

The TTC site is silent on a few issues that could bear on how this reorganization will be received by riders:

There is also no mention of the proposed 512 St. Clair extension to Jane Street which dates back to the Transit City days, but is for all practical purposes a dead issue. That extension was premised on the idea that streetcar service on St. Clair would operate from a carhouse to be shared by the Finch and Jane LRT routes. The Jane LRT is nowhere to be seen, and in any event would be a standard gauge line making its use by TTC gauge St. Clair cars impossible.

Assuming that the Davenport bus is rerouted along St. Clair, this would remove service from Townsley Loop which has been in service since 1924. It would also eliminate the planned connection by the Davenport bus to the SmartTrack St. Clair/Keele station, although this transfer connection would remain possible at the Keele/Weston/St. Clair intersection.

23 thoughts on “Shuffling Bus Routes in The Junction”