The summer 2017 conversion of the entire 501 Queen streetcar route to bus operation presents an opportunity to compare the behaviour of the two modes on this route.

Apologies to readers in advance for the length and number of charts, but that’s the nature of the subject.

The raw data for this article comes from the TTC’s vehicle tracking system, CIS, for which much thanks, but the processing and interpretation are entirely my own. The machinery behind the digestion and presentation of TTC data is explained in Methodology for Analysis of TTC’s Vehicle Tracking Data.

In this article, there are data from two separate time periods:

Many readers will be familiar with charts on this showing the distribution of monthly headways (time between vehicles) and link times (time required to travel between two points). In addition to the detailed data, these charts include summaries of values by hour including averages and standard deviations. The latter values indicate the degree to which actual values differ from the average, and the higher the SD value, the worse the dispersion of individual values. This translates to “bunching” of vehicles which, in the worst case, sees buses running in pairs and trios.

For the purpose of this article, I have created charts pulling together the statistics for streetcar (April) and bus (May) operation. In the case of May, only data from the 7th onward when the route had been converted are included.

Are These Data “Typical” and “Representative”?

In the process of working through the data, I became concerned at the gap between bus and streetcar times. In order to verify whether the April 2017 streetcar values were typical, I also pulled the values for January through March and found that travel times were generally lower for streetcars, although there remain periods (notably evenings) when the bus times over the route are shorter than the streetcar times. However, the difference is not as great as the April 2017 streetcar data implies.

The chart below shows the travel time from Roncesvalles to Silver Birch by month from January to May. (Silver Birch is used as the origin rather than Neville Park because vehicle layovers at the end of the route sometimes occur west of that street, and measurements from that point could include layovers.) May data is bus only, and the other months are streetcar.

This chart shows clearly that April (blue) was an unusual month, and streetcar travel times are higher than for previous months. The May (green) data is for buses which are slightly faster in the evenings, but which lie in the same travel time range as streetcars for the months of 1Q17. The same data can also be shown as a percentage difference relative to the May (bus) data. 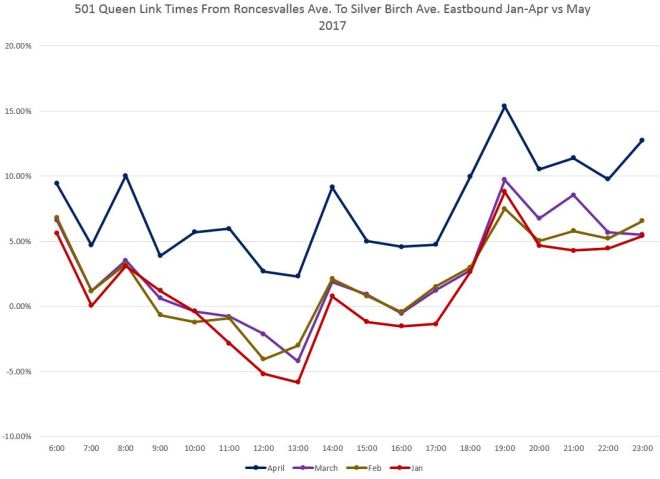 Where the values fall below the 0.00% line, the streetcars are faster. As we will see in the detailed charts for April and May below, the advantage varies over the route and by time of day.

The differences westbound are not as striking, but they are still an improvement over the April-to-May comparison. 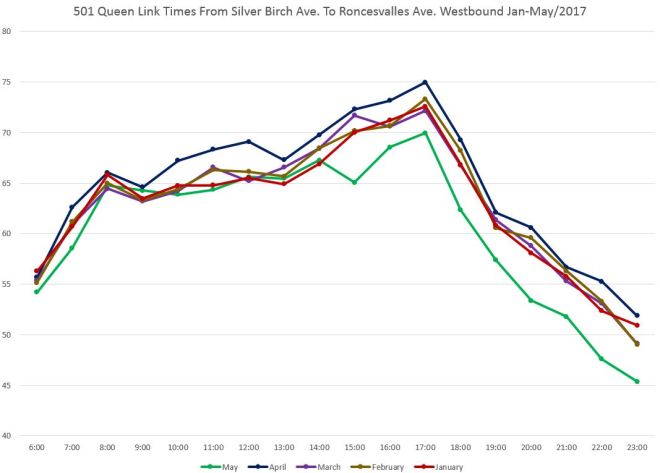 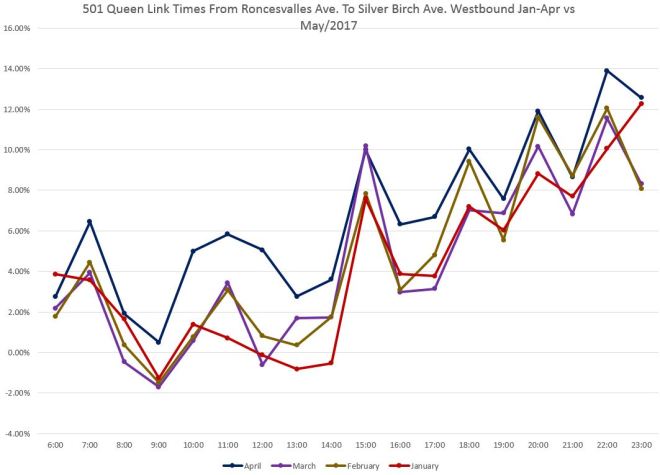 The moral of the story here is that a data comparison may not be what it seems, and a few weeks’ data are not necessarily representative. For example, if the first part of September were used as a reference, this would be during the traffic mess downtown brought on by TIFF and especially the 504 King diversion. This would not be representative for either mode.

Similarly, the situation under poor weather may not produce the same comparison as under the generally fair weather experienced in May, the base month for the bus comparison here.