At a community meeting on June 27, 2017, the TTC presented updated information about their work on reducing the noise level from streetcars at King & Sumach. In response to complaints after the 514 Cherry route began operating in 2016, the TTC changed the 514 so that late evenings and early mornings it operates to Broadview & Queen (looping back via Dundas and Parliament just like a short turning 504 King car). During these periods, a Wheel Trans bus provided a shuttle service on Sumach and Cherry to Distillery Loop.

The TTC presented updated noise readings for this location showing the combined improvement of the full changeover to Flexity cars from CLRVs and of changes to the rail profile that were made to complement slower operation around the curves.

The chart above shows results for the tightest curve at King & Sumach, the east to south. The data plotted here summarize readings taken over a four-hour period, and so they reflect the contribution of whatever type of vehicles showed up. For the most recent reading on May 4, 2017, when the service should have been largely or completely run with Flexitys, the levels from the middle to the high end of the spectrum are markedly lower than they were in the fall.

From the vehicle tracking data for 514 Cherry, I can confirm that the vehicles in service on that date were:

Depending on when the measurements were taken, there was at most one CLRV in service on the route, and none for most of the day. 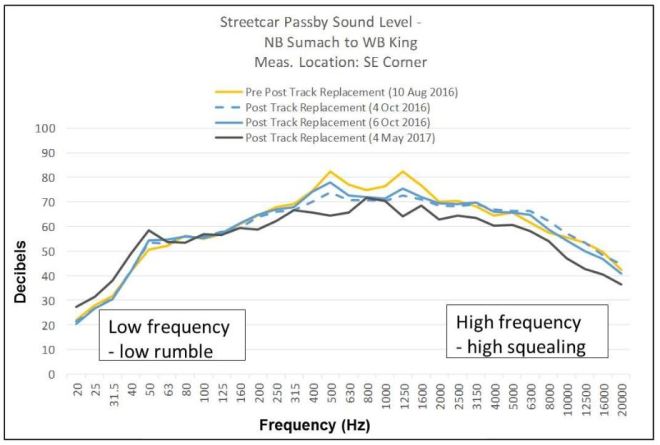 For the north to west turn, the data show less of an improvement. Oddly, the readings for the gentler left turn curve are higher than for the eastbound right turn, but this could be a factor of the measurement location which is closer to the westbound turn.

As a matter of comparison, the TTC also presented readings from two intersections with comparable curve radii, Queen & Broadview and Bathurst & Fleet. 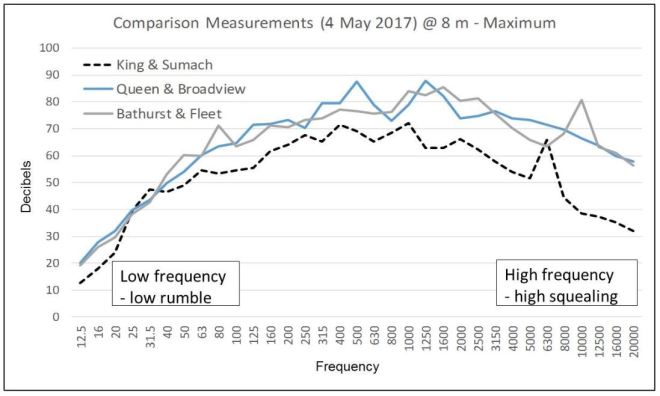 Note that this chart presents maximum values rather than a four hour average. The higher values for the comparator intersections are almost certainly due to the noise caused by CLRVs or ALRVs which have (a) inherently more squeal and (b) less car design factors to limit noise transmission.

Bathurst & Fleet would have had service only on 509 Harbourfront on May 4 as this predates the return of streetcars to 511 Bathurst. I do not have the tracking data for the 509 on that date, and so cannot comment on the proportion of service provided by each vehicle type. Harbourfront is supposed to be all Flexity, but routinely has a few CLRVs on it. It would take only one noisy CLRV to set the maximum values shown above.

The chart is also unclear about which turn was measured at each location, only that this was done from 8 metres away.

Future work of this type should be more careful in identification of the vehicle type and location specifics for any readings and charts. If nothing else, this will improve credibility with members of the public by showing the improvements new cars bring.

Based on the improvements recorded at King & Sumach, the TTC plans to return full streetcar service to Distillery Loop on a date to be announced in July.

This decision provoked something of a pitched battle between residents at various locations on the route. The high points (if they can be called that) included:

In addition to operating the 514 Cherry route with only Flexitys, the TTC is working on a design of a noise absorbing ring that will damp the high frequency vibrations. Wheel sets for two cars are now being manufactured, and they will be installed on test cars in the fall.

Further noise readings will be taken through the summer and fall to track conditions as they evolve, and the level of grease application will be increased. (There is a trackside greaser southbound at Distillery Loop, and the Flexitys have on board greasers that are triggered by GPS information to activate where lubrication is required.)

In a separate article, I will turn to the general unreliability of service at Distillery Loop on the 514 streetcars. The TTC puts this down to the usual problems of mixed traffic operation on King, but there are also issues with uneven headways departing from both the Distillery and Dufferin terminals following layovers that can be fairly long. Line management, as elsewhere on the system, is a problem for this service.