After months of ignoring the obvious, Metrolinx and their Queen’s Park masters will lower fares on the Union Pearson Express. 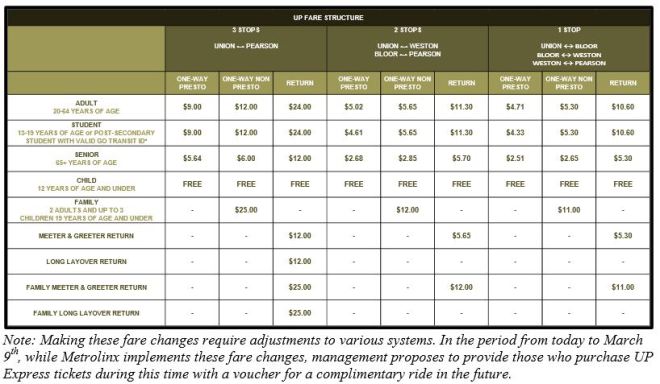 Although the Board does not meet to ratify the change until 6:00 pm February 23, 2016 (as I write this), the report has been online for a few hours, and the change was announced by Minister of Transportation Stephen del Duca earlier in the day.

Not shown in the chart above is a reduction in the monthly pass for workers at the airport. It will fall from $300 to $140, according to The Star.

The official story told both in the management report and accompanying presentation is that UPX did everything it set out to do – it was built on time and on budget, it ran (mostly) on time, and its customers were highly satisfied with the service. Only one small problem – not enough customers.

The low ridership is attributed to four problems.

It has been more challenging then expected to reach both local and non-local markets to ensure they are aware of the service. Notwithstanding the significant media focus on the service and the marketing efforts that have been undertaken, more effort is required to build awareness of the service. [p.2]

This is just a tad hard to swallow given the amount of puffery around town about the new service beginning well before the line opened. Metrolinx now talks about a variety of strategies including staff not just at Pearson Airport to lure travellers to their service, but even with marketing further afield including the ability to buy UPX tickets at airports like Montreal that originate a lot of Toronto-bound traffic. One cannot help wondering what the effective cost per passenger will be.

People Use The Service They Know

Second, engrained habits on how people travel between Pearson Airport and downtown Toronto have proven to be difficult to change. Individuals are used to driving, taking a taxi or limousine to the airport, and with the recent rise of car/ride sharing services, more effort is required to incent people to change their past practice and test the new service.

What is completely ignored in this statement is any concept of convenience, the possibility that auto-based travel (shared or otherwise) provides point-to-point service, whereas UPX by definition is a transit service one must access where it actually stops. This is a major impediment. The demand modelling done for Metrolinx included a fairly wide catchment area, but most of the trips from the various modelled zones required a transit journey just to reach a UPX station. If someone is already on transit, especially the Bloor subway, then continuing to Kipling and the 192 Rocket is not a difficult choice. The problem lies in getting an airport traveller onto public transit in the first place.

People Don’t Know How To Find It

Third, there is uncertainty among potential customers about the beginning and end portions of their trip. This includes the “first mile/last mile” topic, in terms of the total trip time experienced by customers, and navigating at Pearson Airport and Union Station, both of which are complex visual environments, and with ongoing construction at Union Station making wayfinding and signage more complex.

That “first mile” also includes getting to the UPX station, never mind navigating through it, and yet Metrolinx looks only at the last leg of such a journey as the source of problems. Without question, Union Station is a challenging place these days for anyone who doesn’t know it well. Regular commuters adjust as the paths change, but for would-be airport travellers, this could be a first journey. As for the airport, bad signage has been an issue since the line opened. Trotting out this among the excuses begs the obvious question of why this had not been fixed months ago.

People Think It Costs Too Much

The fourth barrier to ridership growth has been perceptions about price. The research indicates that there is a view that UP Express is expensive, without knowledge among potential customers what the exact price is.

This is really the most bizarre explanation for corporate failure I have ever seen. It’s like saying that people don’t buy a Rolls Royce because they think it would cost too much, but they’ve never been into a dealership on the off chance of a one-day sale. Instead of just saying “the fares are too high”, Metrolinx proposes to jetison the “business class” fare structure and go after a completely different market.

As evidenced by the large turnout on the recent Family Day Weekend, when more than 43,000 riders waited in line up to 2-3 hours in order to ride for free, there is a great deal of interest in and curiosity about UP Express. Management is proposing a multi-faceted strategy to build on this interest. A key part of this strategy is a new fare structure.

The proposed new fare strategy is designed to attract new riders, change air travellers’ ingrained travel habits around ground transportation, provide a viable new travel option for travel between downtown Toronto and communities served by UP Express, and reinforce UP Express as a high-quality component of the region’s transportation network.

In otherwords, rather like Porter Air, the UPX is going to have a never-ending sale, although whether it will feature daily adverts with cuddly critters exhorting us to fly UPX remains to be seen.

Let us be honest: you can have the greatest engineering and project management and the nicest trains (even with a drab colour scheme), but without customers, you have failed. The new fares will generate more riding, although how much effect they will have on the bottom line is quite another matter. Fares for non-airport trips will sit at the same level as GO Transit which remains uncompetitive, except on speed, for local travel within Toronto.

A huge, obvious, and totally missing part of the equation is fare integration with the TTC. If, like the 192 Rocket, a trip on UPX included free transfer to the TTC for inbound riders, and a discounted outbound fare with the same effect for outbound trips, then UPX would truly be part of the transit system, not a tantalizing, but annoying service that looks nice on the map, but isn’t worth the effort.

After Metrolinx spent months telling us that the line just had to find its market, the market proved Metrolinx wrong. All the brave talk about success on other fronts is a nice show, but it is meaningless because the service was not properly designed from the outset. I wonder how many awards they will collect from the Air Rail Association for that little blunder?