At its June 21, 2015, meeting, the TTC Board approved leasing the former York Region Transit Concord garage at 8301 Keele Street (between Highway 7 and Langstaff Road). With 50 new buses to be delivered at the end of 2015 and no place to put them, the TTC desperately needs more garage space. The planned McNicoll Garage will not come on stream until 2020 and this leaves Toronto with a shortfall to handle both ridership growth and restoration of better crowding standards for peak service just as political support for improved transit has returned to City Hall.

The capacity of existing garages in May 2015 shows how close to the line the TTC already is. The numbers below are stated in 12m bus equivalents counting each artic as 1.5 vehicles. Maintenance spares are additional to the scheduled service, and this ratio is planned to rise from 16.8% to 18% in 2016. Capital spares are vehicles that are either in warranty/retrofit programs, or are going through mid-life cycle rebuilds.

The capacity of the garages including room for maintenance is only 1,630 [per TTC Board report], but the rest of the fleet is not sitting at Hillcrest for overhaul. In fact, the garages are overcrowded because more space is needed for routine maintenance than is actually available.

If the loading standards for peak service are improved by 10%, this will not affect every route in the system because some of the minor ones operate with elbow room to spare. This typically occrs on routes with few vehicles where adding or removing one bus has a very large effect on the average load and service cannot be scheduled exactly to the current standard. However, if more buses are needed on, say, routes using 2/3 of the fleet, this would represent an increase of about 100 buses for service plus at least 120 spares. Ridership growth at 3% per year over the next five years would add at least another 250 buses to fleet requirements absent any offsets for expansion of the rail network.

The TTC’s 2015 Fleet Plan was based on a lower growth rate, and had no provision for improvement in the crowding standard. 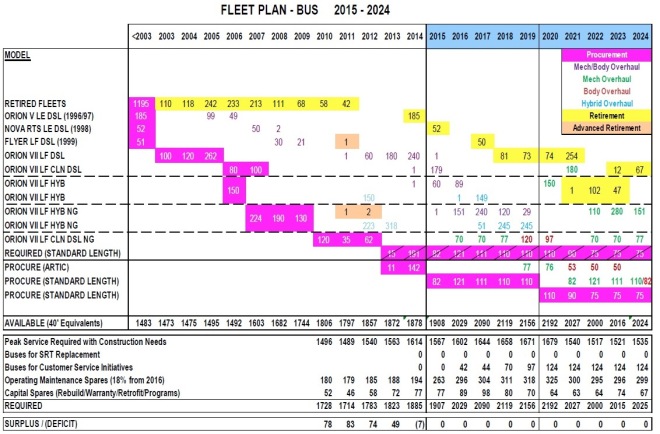 Some buses will be released by the opening of the TYSSE at the end of 2017, and there is another drop in 2021 after the Eglinton Crosstown line replaces busy routes in that corridor. Only at that point does the number of scheduled buses drop back to current levels, and so extra space is needed in the interim just to maintain loading standards, never mind to improve them.

Concord Garage can handle up to 90 12m buses, but planned service improvements to 2020 will push the fleet to almost 500 buses beyond existing garage capacity. McNicoll Garage will be completely consumed the day it opens, and the TTC will still require another new garage subject to whatever savings new rail lines might bring.

An updated fleet and garage plan will appear as part of the 2016 budget process. The challenge will then be for Council to continue its pro-transit stance with funding for better bus service, not just for construction projects.

As part of the Preliminary 2016 Capital Budget background material, the updated fleet plan is now available. 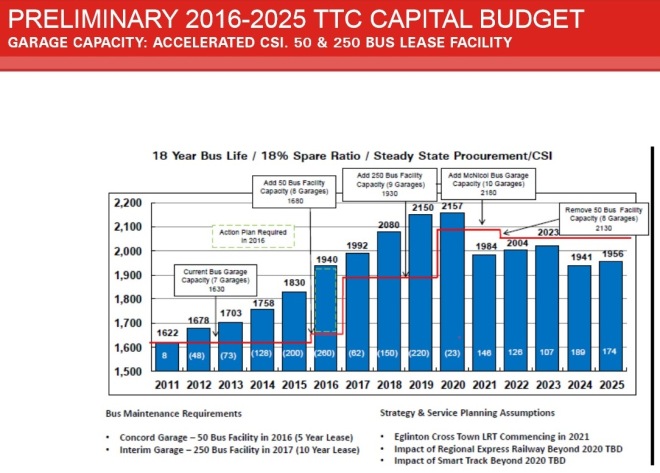 This shows the evolution of fleet requirements relative to garage capacity. The planned increase in the total fleet shows that the TTC is making provision for service increases in coming years, despite original indications that the 50 buses coming late in 2015 were a “one shot” improvement. What exactly will be proposed is not yet clear because the details of future operating budgets are not yet public.

There is a drop in the rate of increase in 2017 likely due to the net effect of the TYSSE opening late that year, and future drops the correspond to the opening of the Eglinton Crosstown and the GO/RER/SmartTrack service and Scarborough Subway a few years later.

This shows how an additional garage beyond even McNicoll is required well into the next decade. Indeed, even with some additional rapid transit capacity, the bus fleet is hardly going to vanish. A 2% annual fleet growth would be equivalent to about 40 buses, or a full garage worth in about 6 years. The intriguing part about this plan is that a new garage of the same size as McNicoll is needed by 2017. We could have McNicoll by then if the project had not been sidelined thanks to the service and funding cuts of the Ford/Stintz era. “Saving money” does not always save money.

(Note that the capacities shown are in 12m buses or equivalent for planning purposes.)