The TTC Board will consider two reports at its meeting on May 27, 2015 relating to service improvements announced jointly by TTC Chair Josh Colle and Mayor John Tory on May 24, 2015.

Most of the 2011 service cuts rammed through by former Mayor Rob Ford and former Chair Karen Stintz will be restored. The “greater good” of the system, a phrase beloved of Ms. Stintz, clearly no longer includes slashing transit service.

One rather contorted paragraph in the report gives an insight into the process by which routes got on the 2011 list:

In other words, the 2011 evaluations didn’t actually count passengers, but applied a formula and process to determine which routes made the cut. It is no wonder that some riders and Councillors were baffled to see routes with real live riders, but be told that there were not enough of them.

Details of the changes are in the report. 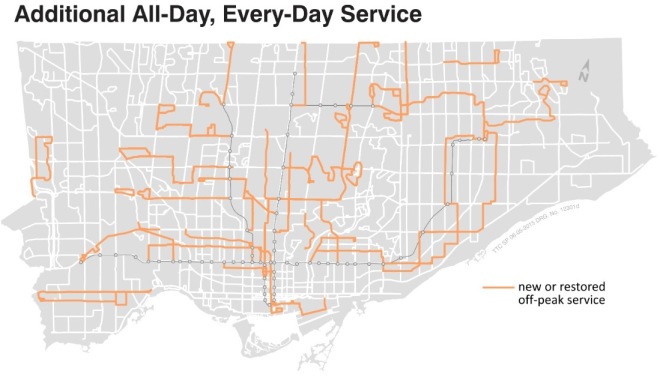 Several routes will be added (and a few restored) to the Blue Night Network. This will fill in many gaps and address service in areas where there is potential demand. In a few cases, existing routes will be modified to simplify their layout and bring them more into consistency with daytime routes.

Details of the changes are in the report.

Note that the extension of 353 Steeles to York University has already been scheduled to occur on June 21, 2015 in anticipation of the Pan Am Games at York University..

One important aspect of the very old night service network, probably remembered by only a few old hands, is that there were published schedules for major stops and timed connections where possible between routes. This was lost when the Blue Night network was created decades ago, and the TTC would do well to restore accurate information and more rigourous operation of the night routes. The quarterly performance measures are particularly bad for the night routes, a serious problem for people attempting to travel when 30-minute headways can play havoc with trip planning.