[See also Part 2 of this discussion.]

In a previous article and its long comment thread, readers and I have discussed the question of demand for the Eglinton-Crosstown LRT subway.  After the Metrolinx board meeting in June that started all this, I asked Metrolinx for more information about their projected ridership for the underground line.  In particular, I was interested in the numbers behind not just Eglinton, but the other routes on the demand map below. 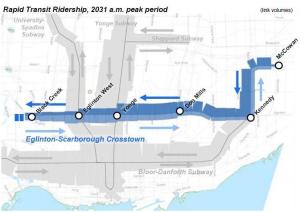 We also expect an increase of ridership at the other stations along the Eglinton-Scarborough line, but passenger behaviour at Kennedy is the dominant factor distinguishing the two plans.

Finally, below is a comparison of the anticipated 2031 morning peak demand points for the two plans:

[Corrections to the original text provided by Metrolinx July 26, 2011]

This is the entire reply, and there is no information on the following issues:

My ongoing complaint about regional planning, both by the TTC and by Metrolinx, is that we talk a good line about networks, but we plan lines in isolation.  It is trivially simple to produce a huge demand on a new route simply by making it the only addition to an existing network — that’s how the TTC “justified” the Sheppard subway.

Ontario is spending $8-billion keeping Rob Ford happy by burying the Eglinton line, and they desperately need to justify this investment.  A 12k demand at the peak point is just the ticket!  Where else might the extra $4b have been spent to better overall effect?  We don’t know because Metrolinx has reverted from network planning to the traditional one-at-a-time methodology it was set up to avoid.

Metrolinx needs to be much more transparent about the way it projects ridership and the underlying assumptions of its models.  What routes are in the model network?  What frequency of service operates on them?  What is the fare structure?  What is the presumed future cost or practicality of using an automobile?  Where are the capacity constraints in the road and transit neworks?  How do these factors interact to shift projected demands?

This is the heart of regional planning, and Metrolinx is utterly silent on these issues.  Instead, they prefer to show us fully built-out networks decades in the future, networks we already know will be different thanks to various short-term changes and likely funding constraints, networks we will never see in actual operation.  We see simulations of the impossible, not the practical or the likely conditions we will have to live with.

This may serve short-term political needs, but the approach evades, no ignores, the vital debate we must have about what we might (or might not) build with the limited funding that our parsimonious, if not bankrupt, governments are likely to devote to transit.

43 thoughts on “How Many Riders Will Use The Crosstown?”