This thread began with an introduction to the “problem” of capacity at Bloor-Yonge Station which dates back to the 1980s, an era when all expansion of capacity for travel from the suburbs to downtown was assumed to be on the subway network.  If you accept that premise, then it follows that massive expansion of subway capacity is absolutely required.  However, as we have recently seen from demand projections by Metrolinx, when there are good alternatives to the existing subway, people may find other ways to get downtown.

In this section, I will present another chunk from the long Chapter 3 in the TTC’s 1988 study.  This part includes descriptions of four ways to achieve shorter headways on the Yonge line through signalling changes.

END_OF_DOCUMENT_TOKEN_TO_BE_REPLACED 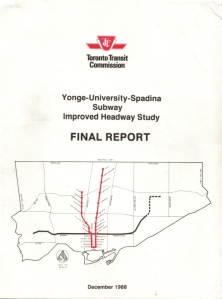 Recently, there has been a lot of discussion here about the practicality and desirability of adding capacity to the Yonge-University subway.  My position is clear:  there is more to be gained by adding new capacity in other corridors that can, in addition to relieving pressure on the Yonge line, provide alternatives in the transportation network to what now exists.

For twenty years, the focus has always been on beefing up the Yonge line, and this reflects the TTC’s long-standing tradition of looking only at their network when planning transit capacity.  Earlier subway expansion schemes completely omitted the GO Transit network from calculating potential regional demand and modelled all growth in riding on the subway system.  The effect of this shows up in the Network 2011 proposal that projected large increases in subway demand.  Those increases triggered a study in 1988 of what could be done to add capacity to the Yonge line, and we are still living with some of the fallout from that study today.

When I dug the report out of my archives, I thought that I would only scan, edit and post a few chapters. However, I soon realized that the arguments of 20 years ago are worth reading today because they are instructive both for the basics of transit operations, and because they show the origins of some current thinking.

For convenience, I have chopped up the document into sections.  The text, which was originally doublespaced typewriter (Courier) format, has been converted to single spaced Times Roman (yes, I know some of you just hate Times Roman).  Some exhibits that didn’t lend themselves to text-based conversion have been scanned separately as jpegs.

The first installment (this post) contains chapter 2 and the first parts of chapter 3 of the Final Report (chapter 1 was the Executive Summary) dealing with the problem of projected congestion and the various ways in which signal changes could be used to reduce headways.  In the next installments, we will see:

Chapter 4 (the Bloor Yonge schemes) contains useful material to those of you who have been, figuratively speaking, drawing lines on maps for the past few weeks with possible alignments for additional tracks.  It helps to know the lay of the land both above and below ground.

Because we have already had quite a lot of discussion about routing alternatives, I will exercise my editorial prerogative to delete or severely cut repetitions of past discussions.  The main reason I am putting this material up is to show what was actually considered and how the history of past studies like this colours future projects.  That’s an important context for the current Regional Transportation Plan discussions — things that seem trivial today will take on the aura of historical received wisdom in less than a decade.  Maps drawn on stone tablets are hard to change.