The TTC presented its Capital Budget at last Wednesday’s Commission Meeting, and included a few surprises.  Before I go into the details, a few general observations:

In the material that follows, I have converted some of the presentation to plain text and left other parts as scanned images to keep the total size down.  My own comments are interspersed with the TTC presentation and they are in italics.

In TTC budget parlance, “Below the line” refers to projects that do not yet have funding approval.  This part of the budget has been getting fatter every year while the TTC hopes to wake up one day with a very large gift from the Tooth Fairy under its pillow.  A major problem here, as we will see in later sections, is the assumption of Federal funding for one third of future projects.  In fact, Ottawa has no intention of making any ongoing contributions and what they do give us is targeted to specific projects with some sort of political payback rather than to general capital programs. 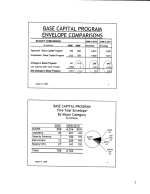 The Base Capital Program Envelope Comparisons show some of the shuffling that goes on.  Note the circled figures on the chart.  In 2008, the TTC underspent on several projects and has City approval to carry forward $168-million into 2009.  Due to additional deferals in 2009, the base program for that year is also below original projections.  The net effect is that expected 2009 spending stays the same.  On a five and ten year forward basis there is a small increase, but it is hard to tell how much the effect is due to real savings, project cancellations, or schedules that stretch beyond 2017 and therefore don’t show up in this projection.

The table and chart showing spending by major category indicates that 85% of total spending is on State of Good Repair (SOGR).  In effect, just keeping the system running is soaking up most of the funding, and some of that is not even confirmed. 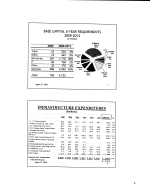 The next chart subdivides spending by area.  The Infrastructure Expenditures shows everything except Vehicles which appear on the next page. 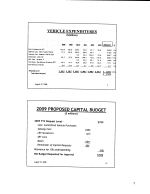 In the vehicle expenditures we see good examples of how the five-year budget doesn’t show the full extent of some project costs with items such as the 204 new streetcars still incomplete.

The proposed budget is reduced by $50 million on the presumption that the TTC historically doesn’t spend all it asks for except on vehicle procurement contracts.  10% of the non-vehicle budget is deducted from the request to the City on the assumption that it is not actually going to be needed. 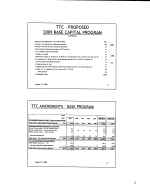 The proposed base capital program subdivides the 2009 total slightly differently from what went before but otherwise comes to the same total.

The amendments include mainly requests for Energy Conservation projects by the Commission.  It is dubious whether all of these will actually produce savings that are cost effective, and those that don’t make the grade do not proceed.  This is mainly a placeholder line in the budget.  (A separate report on some of these projects was also on the last agenda.)

Note the impact that Transit City will have on bus fleet requirements to the point that Mount Dennis will be the last new garage opened for the foreseeable future.

Streetcar plans include overhauls of 132 of the CLRVs which need to remain operational long enough for the new cars to arrive and to accommodate growth in the demand on and extent of the system.  The value of the land at Roncesvalles and Russell Carhouses will not be available as an offset to other projects until most if not all of the current high-floor fleet is retired although it would make sense to cut back to a single “high-floor” carhouse when possible.

The grand total cost of the SRT upgrade and extension is now $1.7-billion.  This shows the folly of retaining the RT technology.  The TTC concocted a rationale showing that the RT retention was cost effective versus LRT, but this only works if we never extend the line.  A further argument about problems with LRT capacity on the section from STC south to Kennedy essential claimed that the TTC is incapable of managing blended services.  In brief “we’re incompetent, so we need to spend a billion to makeup for it”.

What is really going on, I believe, is an attempt to keep the RT technology alive for an Eglinton option, possibly a private sector partnership on a design-build-operate basis.

If we move away from RT, the costs go down, and the artificial funding problem of a massively expensive Malvern to Pearson route is much less pressing.  This will be a major issue for debate when the Metrolinx RTP comes out.

The claimed upgrade to YUS capacity requires many things, some of which don’t appear in this budget.  They include the 7th car option, changes in terminal operations (and possibly crew management practices), and capacity upgrades at various stations to handle the additional pedestrian flows.  Nothing has been said about how the BD subway would absorb passengers arriving at a much higher rate at the Yonge and St. George transfer stations.

The GTA farecard project is now estimated at a staggering $365-million just for the TTC.  This entire project needs to be seriously re-examined to determine where the costs lie and whether it is artifically complex or simply ruinously expensive.  Either way, it’s a lot of money to spend to get rid of the Steeles Avenue fare boundary, and a simpler, cheaper solution for GTA fare collection is badly needed.

This is a huge shopping list, and in the second part of this article, I will look at the funding problems.