The TTC will make many changes to its services on Thanksgiving weekend, Sunday, October 13, 2019.

Of particular concern in this round of changes is that a policy adopted by the TTC Board in June 2019 allows schedule changes intended to improve reliability to take precedence over loading standards. Several routes where service is nominally “improved” will also have crowding beyond the Board approved standards. This is caused by a shortfall in the budget which does not provide enough resources, the TTC claims, to operate service at a level that meets the standards. There are no numeric values given and so the degree of overcrowding is not known. The affected routes and time periods are shown in the chart below. 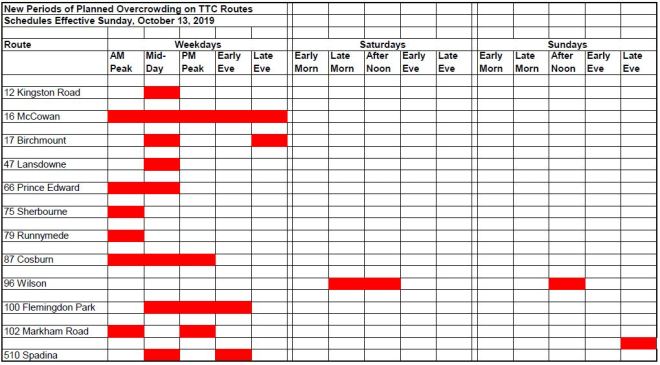 On a related note, a few routes which are now part of the Ten Minute Network will slip beyond that target headway.

The intent is to correct these situations either through the 2020 budget or by reallocation of service from other routes.

(The two charts above are included in the PDF containing all of the schedule changes at the end of this article.)

In response to my query about these practices, Mark Mis, Manager of Service Planning replied:

SM: … it was my understanding that the table of crowded routes was going to be published regularly, but nothing has appeared after the first iteration … [earlier this year].

MM: The TTC will be reporting on crowded periods of operation in the CEO Report later in the fall when we have a complete board period of service reliability data. We think it is important to report on both crowding and reliability at the same time.

SM: … does this footnote mean that the affected services are being scheduled at over the Service Standards for loading?

MM: The footnote is an internal note in the Board Period memo for record keeping purposes. It indicates a period of operation that is scheduled over the crowding standard because of a change in running time as opposed to demand. This strategy to address service reliability was approved by the Board on June 12, 2019 in the Improvements to Surface Transit Schedules report. This is important to note when you take the response to Q1 into account.

An effective transit schedule is comprised of two key components:accurate estimates of demand and cycle time—the time for an operator/vehicle to complete a round-trip. If the cycle time is insufficient, a transit schedule can not be delivered as planned resulting in customers experiencing unreliable service and higher levels of crowding than intended.

Customers value consistent and dependable schedules because it improves their trip planning, reduces wait times and reduces trip durations. This was demonstrated by the King Street pilot. A key outcome of it was more consistent and less variable service which resulted in tremendous increases in ridership. [p. 3]

The TTC is leveraging new technology and applying a new approach to preparing reliable schedules which includes setting cycle time at the 95th percentile of observed travel time along a route in a given period of operation. This is meant to ensure that operators have sufficient time to deliver service as planned and advertised during most of the operating period. [p. 5]

The TTC 2019 Operating Budget includes some funding to improve service reliability and capacity. It is not possible to bring all schedules that actually operate outside of the tolerances of service standards in line with them within existing funding. The new schedules will reflect actual operating conditions and will result in more reliable service for customers. [p. 7]

On several routes that already have new schedules, a common observation is that vehicles cluster at terminals because they generally arrive early and/or have long scheduled layovers. Despite this, the vehicles do not manage to depart on a regular headway (time between vehicles) nor do they achieve the “on time performance” goal. The TTC is quite generous with a six-minute window in which a departure is considered “on time”. Service becomes progressively more bunched as cars and buses proceed along their route, and there is no measurement of service reliability other than at terminals.

This begs the question of rejigging the schedules in the first place when service can be so irregular. In almost all cases, the “improved” schedules offer less frequent service because existing vehicle spacings are stretched to give longer trip times. Longer trips may reduce short turns, but this is only one of several possible measures of service quality. See Zero Short Turns Does Not Equal Better Service.

The 506 Carlton route is now officially a low-floor streetcar service with Flexitys scheduled at all hours. Bus and CLRV trippers will supplement peak services. Further details are in a previous article.

The 505 Dundas route remains a bus operation, but the schedules will change to remove extra running time added for water main construction in the central part of the route. This may relieve the worst of the bunching of Dundas buses now seen at terminals. Riders on the 505 will see improved service, or at least the bunches of buses will come slightly more often than they do today.

Conversion of 505 Dundas to Flexity streetcar operation is planned for the winter/spring after conversion of the overhead on that route for pantograph operation.

Routes 510 Spadina and 509 Harbourfront will get new schedules with blended services during most off-peak periods at Union Station. Scheduled headways will be the same on each route with the intent that cars will alternate on a regular, reliable basis. The downside to this scheme is that service on 510 Spadina will run less frequently, and layover times, which already cause queuing problems at the terminals are increased. 509 Harbourfront will see less frequent service as a regular seasonal change.

Overnight service on 306 Carlton will change to every 20 minutes, and on 310 Spadina to every 15 minutes to push a few more cars out of the crowded carhouses. It is unclear how long this practice will actually last once the CLRV fleet is retired because capacity will be lost at Russell Carhouse for construction starting in 2020.

Construction of the new mouth of the Don River in the Portlands has progressed to the point that on October 30, 2019, Commissioners Street will be closed between Cherry and Saulter for excavation of the new river. A new Commissioners Street road bridge will cross the river, but at this point there is no money in the Portlands project for a streetcar bridge although provision exists in the plans. This would allow the eventual connection of an extended Cherry Street service east to Leslie Barns via Commissioners.

The route changes from the Junction Area Study will go into effect concurrently with route modifications to accommodate elevator construction at Runnymede Station.

The new route structure, in brief:

Due to construction, no buses will be able to loop at Runnymede Station triggering the following changes:

Seasonal service will end on:

The details of all changes are in the file linked below.