Toronto’s Executive Committee will consider a report from the City Manager at its meeting of May 15, 2017 regarding the preferred alignment for the southern end of the “Relief Line” subway, as well as the current status of the Yonge Subway Extension to Richmond Hill.

This report has taken on a more political context with Mayor Tory’s recent statements that unless Queen’s Park coughs up financial support for the RL, he will block any further work on the YSE. Needless to say, this stance did not play well in York Region or at Queen’s Park.

The two lines, as they currently are proposed, look like this: 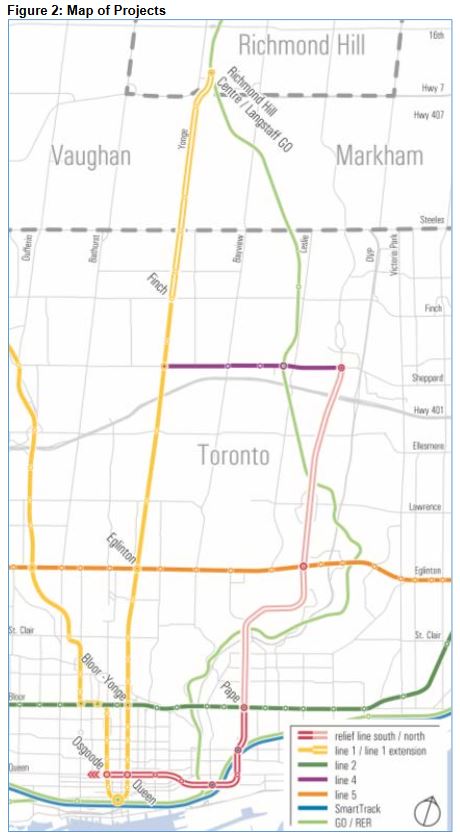 One might cast a though back only a few years to Tory’s election campaign in which he claimed that SmartTrack would eliminate the need for a Relief Line, that it would have frequent service with many new stops, that it would operate with TTC fares, and that it would be self-financing. Most of these claims were demonstrably false or impossible at the time, and the project scope has changed dramatically. Even the question of a “TTC fare” is tangled up in the Metrolinx Fare Integration study which could well bring higher rapid transit fares to the TTC as a way of “integrating” them with regional systems.

Tory’s convoluted evolution into a Relief Line supporter undermines his credibility on many issues not the least of which is an understanding of when money he demands might actually be spent. There is no point in getting a “commitment” from Queen’s Park when the government will be unrecognizable by the time the bills come due. Toronto has far more pressing demands in the short and medium term, and meanwhile there is $150 million of provincial money going into design work for the RL.

As for the YSE, it has been on York Region’s wish list for years, and is more advanced than the Scarborough Subway which is mired in debates about the alignment and number of stations. The problem for Toronto is that there is no capacity for additional riders from an extension on the Yonge line, and indeed it is already over capacity according to a CBC interview with TTC Deputy CEO Chris Upfold on May 10.

END_OF_DOCUMENT_TOKEN_TO_BE_REPLACED

See also The TTC’s New Website where I am tracking problems that are still open, partly fixed or fixed. This was last updated on November 22, 2021.

November 19, 2021: The article on the Queen & Shaw track replacement project has been updated with photos.