Metrolinx is running a survey of “fare integration”, whatever that might mean to you, until November 30, 2015.

This survey is striking in the way that it reinforces options and viewpoints commonly seen in Metrolinx analysis of fare systems. It is quite 905-centric both in the types of questions and options, and the view of how people might use a transit network.

The survey begins by asking about someone’s “typical trip” to establish an origin-destination pair. Of course, many riders within the city have many regular destinations, especially when their travel (like my own) is not dominated by commute trips to work or to school. After one gets through that section, another comes up asking about non-commute trips but with no attempt to quantify them or ascertain where they might occur.

Cross-border and multi-carrier travel figure prominently in the survey, something by which, self-evidently, a regular TTC rider using only that system is not affected. The following list of fare options reappears in different guises elsewhere in the survey. As a piece of design, it fails because some questions are in the “I can …” format while others are “would” or “should” questions. It is unclear how an “I can” question can have anything beyond a “yes” or “no” answer. Does Metrolinx want our opinion on paying one fare for all of a local transit system, or asking if I can already do this?

There is a big problem in that some options interact, but there is no provision for this. Metrolinx is obsessed with the idea of paying more for “better” service which could mean anything from a GO Train or a Highway coach, to a local express bus, the subway or even a new LRT line. One might agree with a premium for the GO train (although that would also relate to distance travelled), but not for other types of service. There is no option to distinguish between these. 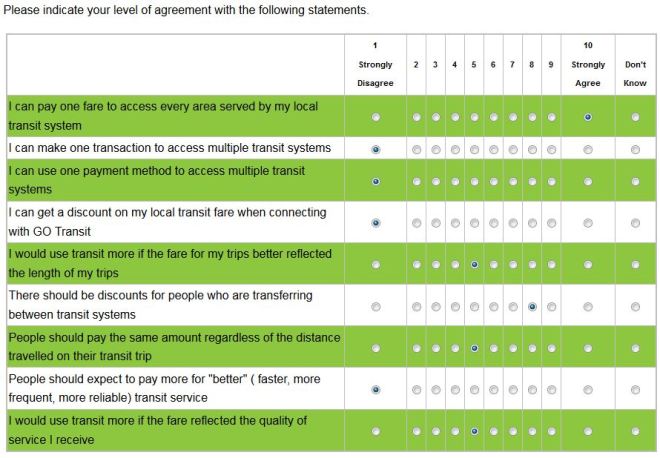 The ideas reappear as a list of challenges to transit travel. For a monthly pass holder, many of these options don’t really apply although one could certainly complain about the cost (high fare multiples) and the fact that on some parts of even the TTC, transfers can be a big headache thanks to unreliable service.

Another set of options requires the choice of a top three issues and ranking them rather than using the 1-to-9 scale for all of them.

Later the survey asks about co-fares between systems including local-to-GO and local-to-local transfers, but is silent on the question of how new co-fares might be funded, indeed on the whole question of regional fare revenue and subsidy sharing. Similarly, questions about distance or zone-based fares give no hint of what the effect might be for different journeys. Time based transfer and return trip privileges are nowhere to be found, typical for Metrolinx that only grudgingly acknowledges them as an option within local systems, not for the network as a whole.

No doubt the results from this survey will be trotted out to support whatever fare scheme Metrolinx comes up with, but it could be strongly biased to “typical” Metrolinx riders who have a very different view of the transit world and fares than their (much more numerous) “local” network cousins. It would be amusing to see what a similar survey carried out for the population within Toronto would yield. The survey includes a request for one’s postal code, and so at least there should be some idea of the distribution of responses across the GTHA.