Updated Jan. 19, 2015 at 4:00 pm: One sour note in the announcement is the fact that the Metropass multiple will go up from 49 to 50 giving a new price of $141.50 vs the existing $133.75, an increase of 5.8%. In the midst of an otherwise upbeat, positive set of recommendations, it was a poor choice not to mention that frequent users would pay a higher increase for TTC fares. This continues TTC management’s desire to bump the pass pricing up on the basis that frequent users are getting too high a subsidy. If that’s the official position of the Mayor and TTC Chair, they should have said so in the press release. 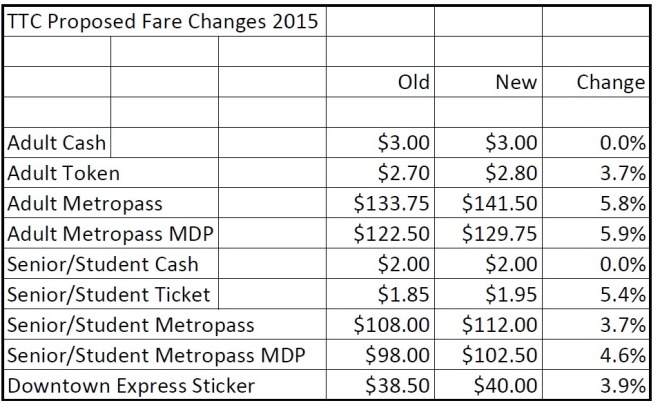 Much of this program arose from the August 2014 “Opportunities” report from TTC management.

At the time, then-candidate Tory argued against these proposals on the grounds that they were unfunded, and behind the scenes, the Tory camp complained that the TTC was supporting another candidate’s platform. To his credit, now-Mayor Tory recognizes the importance of better transit service that can be delivered in the short term, and he has embraced advice from Andy Byford wholeheartedly. Among the lessons he learned was that TTC’s off-peak ridership is higher and growing faster then peak demand, and that investments in off-peak service will benefit a very large number of riders throughout the city. This is an important change from a focus just on peak period, core-oriented capacity.

Tory has reluctantly dropped his proposed fare freeze saying that Toronto cannot do this and get on with improving transit. He now argues that fares will go up a bit more, but that riders will get a lot more service.

During the press conference, the Mayor made pointed, repeated references to “my predecessor” and “the previous administration” saying that the policy of service cuts and subsidy freezes was wrong. One can be gleeful seeing the Ford era openly criticized by the new Mayor, but that’s not the important point. Simply by making the statement, Tory puts allies inherited from the ancien régime on notice. Better TTC funding is not simply a predictable request from the usual activists and left-wing Councillors, but part of the Mayor’s program.

The financial proposal is that the TTC’s budgeted subsidy from Toronto will rise from $440.1-million in 2014 to nearly $479m in 2015. The fare increase plus added ridership (projected at 545m in 2015, up 10m from 2014) will bring in $43m more, net of the elimination of children’s fares ($7m). (The subsidy includes approximately $90m in provincial gas tax revenue which is paid to the City. This amount has not changed in many years.)

Further details will be revealed in the City Budget Launch on January 20, and at the TTC Board’s own budget meeting on February 2. Implementation of this plan is contingent on Council approval, although the new fares (which can be approved by the TTC itself) will take effect March 1. Service changes require lead time for planning, staffing, and in the case of the new buses, acquisition of vehicles and a storage yard. In practice, the changes will likely roll out beginning later this spring with the majority of service improvements coming in September or later. This will also limit the cost of new services to a smaller part of the year, although full-year costs will have to be absorbed in 2016.

The maps in the Opportunties report (linked above) show the range of routes that will likely be affected by the various proposals. I checked with TTC officials at the press conference, and although there may be minor changes, these maps give substantially a good idea of where the improvements will be.

Of the many opportunities proposed in August, the one which is notable by its absence is the two-hour fare. There is only so much money to spend on a new fare structure, and rebuilding service takes priority this year. However, the need for a simpler “transfer” mechanism on the TTC will be forced by the Presto implementation which Andy Byford is pressing Metrolinx to complete by the end of 2016. This will more-or-less force the question as part of next year’s budget planning.

During the scrum, the inevitable question to Mayor Tory was “how will you pay for all of this”. Tory demurred saying all would be revealed at the Budget Launch. An important point, however, is that he plans to keep tax increases to inflation, but the Scarborough Subway tax will be outside of that “inflationary” envelope.

This is a very good start for the Tory/Colle era of TTC policy-making. Rather than cherry-picking a handful of improvements that might benefit only a small segment of Toronto, they have opted for a variety of changes addressing many submarkets within the TTC’s ridership. If this continues in future years, by the time the TTC and Metrolinx open new rapid transit lines, Toronto will have a much improved surface network linking riders to new and improved trunk routes.