Waterfront Toronto’s public meeting on May 24 drew an audience of about 300.  The presentation droned on for well over its allotted time, and consisted mainly of reading through a Powerpoint deck without benefit of a working laser pointer to highlight items of interest on the screen.  Oh well.  No marks for Management Presentation 101.

The content was more important than the style, and what came through loud and clear was that planning by bean counters has replaced planning with a vision for a great waterfront.

Council may have stopped the Fords in their tracks last fall, but Waterfront Toronto is clearly working to a penny-pinching agenda.  This shows up in two major ways.

First, although the most recent plan (see page 12 of the presentation, right side is the newest) attempts to create more greenspace on the water’s edge, it has lost the magic of the revitalized mouth of the Don.  The drawing still shows a river meander, but you have to read the text to learn that the outermost part of this, west of Cherry Street, would not actually be built until and only if the Lafarge Concrete plant decides to close up shop.  Until then, the mouth of the Don will be the Lafarge slip.  In the original plan, the river mouth was north of the slip and could be built independently of the plant.

Second, transit seems to have fallen off of the map.  Something will be built, maybe, eventually, although for the near term we must make do with buses, possibly on a right-of-way.  Waterfront Toronto is obsessed with the problems of connecting to Union Station (and associated costs as discussed elsewhere on this site), but seems to forget that an alternate option from the east end of the harbour, certainly from the Port Lands, is to go north via Cherry to King.  Some of the staging of upcoming projects could support this, but bits are missing, and there is little sense that anyone really is looking beyond a bus route here and there.

Neither of these situations went down particularly well with the attendees.  Examples of “transformational initiatives” (for which you absolutely positively must not ever dream they might mean “casino”) from other cities are included (Page 18), but as one speaker remarked, it is the river that is the “transformation”, the jewel of the project.  Indeed, Waterfront Toronto can hardly stop themselves from talking about the international recognition the design received, a design which depends on the river mouth, now relegated to a “phase 5, maybe” status.

Many spoke about the need for good transit to the site.  The staging (Page 25) could support a through LRT service, but only partly in the early years.  Stage 1 includes realignment of Cherry and Queen’s Quay, but it does not include a new Cherry Street bridge over the Don (essential for an LRT line running south to the Keating Channel), nor does it include widening of the Cherry underpass at the rail corridor (essential for connecting north to the Cherry Street streetcar tracks to be installed later this year).

Adrian Morrow in the Globe wrote about the Tiny Perfect Streetcar Line in today’s Globe including the general problem that transit to real development in the waterfront is not on most politicians’ agendas while transit to phantom developments in the suburbs gets no end of attention.  One big problem is that Metrolinx wants nothing to do with waterfront transit and regards this as a local initiative to be paid for on the City’s dime.  I cannot help wondering just how Queen’s Park justifies its investment in many proposals for the 905 that will serve far less development than the waterfront LRT network, but leaves Toronto high and dry.

I may seem unduly harsh on Waterfront Toronto given the pressures they are under from the Monorail Mania at City Hall, but there is too much of a sense of making do, of a loss of emphasis on what will make the eastern waterfront a great place, not just an OK suburb of downtown.  Particularly notable in the presentation was the absence of any explanation of how these lands would relate to nearby existing and future developments, a sense of place in the larger city.  A big problem was that the presenter, a senior Waterfront Toronto exec, didn’t seem really thrilled about what he was showing us, but instead focussed on how the plan saved money, how it addressed the Ford’s desire for more and faster development.  He was playing to the wrong crowd.

The new overall plan for the Port Lands is broken into three stages based on gradual expansion of flood protection that would allow a wider set of land uses in various areas.

Phase 1 (Page 20) creates a spillway parallel to the Don Roadway so that a flood from the river would not inundate lands west of Cherry Street.  This frees up the first set of lands for redevelopment.

Phase 2 (Page 21) raises the Don Roadway itself to create a berm that protects the Film Studio district.

Phase 3 (Page 22) builds the new river mouth and associated parkland/spillway so that land between Cherry and the Don Roadway can be developed.

The presentation notes that the amount of land available for development is larger in the revised plan, but a number of speakers pointed out that by Waterfront Toronto’s own admission, the real estate industry cannot absorb all of the available lands for decades.  Whether there is any value from the “new” land is unclear, although if this falls within, say, Phase 1, it would accelerate revenue from the overall project.

The whole issue was to go to Council imminently, but this has been put off until the fall so that details of how the financing might work can be figured out, and the plan can undergo an external review.  The next public session will likely be in August with the, in effect, final version of the proposal that will go to Council.  If Council approves the new scheme, this will trigger a roughly 18-month process to amend the approved Environmental Assessment.

The Waterfront Toronto Board has approved a project to rebuild the sidewalk and bike path (Martin Goodman trail) from Bay to Jarvis Street this summer.  The work will also  include reconstruction of the aging Jarvis Slip’s dock wall and revision of its anchoring system to provide clearance for new telecomm and hydro ductwork that will serve the eastern waterfront.  Some road refinishing will be done to tidy up Queen’s Quay if the budget permits.

The intent is to provide a link to the new developments on Queen’s Quay east that have been isolated from the stylistic changes further west and especially the major redesign of the road to begin this summer.

The CEO’s Report includes updates on all major projects at Waterfront Toronto (I tend to focus on transit and related issues).  One of the most important notes in this month’s report is:

The province has indicated that it is tracking for a spring/summer approvals process for Waterfront Toronto’s long-standing request for increased operational governance. A scoped consent package has been negotiated with the three orders of government which would provide Waterfront Toronto the ability to borrow, create subsidiaries, receive revenues and encumber its assets. Once provincial approval has been obtained, the federal government will seek its respective approvals likely in the late summer/fall.  (Page 6)

Several projects, including the transit infrastructure for the eastern waterfront, will require new funding sources among which may be new mechanisms within Waterfront Toronto itself.  At the Board meeting, CEO John Campbell was optimistic that senior governments would agree to proposed changes, although he noted that Queen’s Park was particularly sensitive on the matter of creating subsidiaries in the wake of the ORNGE scandal.

Waterfront Toronto will hold a public meeting tonight to present the current status of the review of plans for the Port Lands.  This was supposed to be the final meeting, but the study period has been extended through the summer and the report to Council will now occur in the fall.  At yesterday’s board meeting, Waterfront Toronto CEO John Campbell indicated that there would likely be a fourth public meeting to review the final report in August.

The project to rebuild and reconfigure Queen’s Quay from Spadina to Bay will get underway in August, although some utility work has already begun.  509 Harbourfront streetcars will be replaced with buses at the end of July.

There will be two presentations of detailed information on Central Waterfront projects and on the construction plans.  The first is on Wednesday, June 6 from 7:00 to 9:00 pm in the Brigantine Room at Harbourfront (Lower Simcoe & Queen’s Quay).  On Saturday, June 9, from 10:00 to 2:00, there will be a drop in at 20 Bay Street in the lobby.

The complete reconstruction project is expected to take 2½ years.

Between Bay and Jarvis Streets, Queen’s Quay is a bit of a mess thanks to construction and to removal of the Redpath rail spur.  Waterfront Toronto’s board has now approved a project to rebuild the south edge of the street with a new sidewalk and cycling path.  A major part of this project will be the reconstruction of the aging Jarvis Slip dock wall both to repair the 60-year old structure and to modify its anchoring system under Queen’s Quay to make room for new hydro and telecomm ducts that will eventually serve developments in the eastern waterfront.

As for transit on Queen’s Quay east, Waterfront Toronto commissioned a study of alternative “interim” configurations pending the construction of the full planned LRT route.  Although over 200 permutations of options were on the table, this has been narrowed down to 8.  WFT will undertake an amendment to the transit project’s EA, and consultation for this will begin in late June.  The list of options will probably not surface until that time.

The track strings for Cherry Street are now sitting across from TNT Foods just south of Commissioners Street. 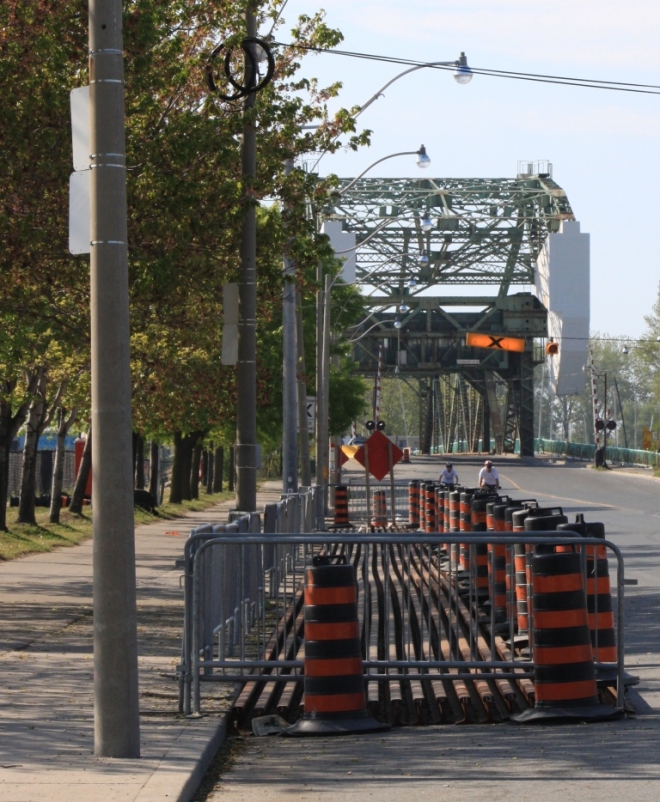 Construction is well underway on Cherry which is closed from Lake Shore north.

Thanks to Jacob Louy for bringing to my attention a notice that the TTC has begun work welding track for the Cherry Street line.

The right-of-way for streetcars will be constructed as part of the Cherry Street project now underway, and this notice confirms that streetcar track will be included in the original construction even though streetcars won’t likely run here until after the Pan Am Games in 2015.

The track assembly is taking place near Cherry and Polson near TNT Supermarket and far from the existing streetcar system.  The last time streetcars were in this neighbourhood, they were on a boat heading for Egypt.  Who knows when we might see track installed on this part of Cherry in the Port Lands.