When I talk about taking a Downtown Relief Line north to Eglinton, some people, including some at the TTC, look at me as if I had at least two heads.  That’s a shame, considering that the TTC itself did a preliminary design for this 35 years ago.

I offer these tidbits from my archives not to reignite a discussion we have had here extensively before, but to put to rest any claims that this line was only ever intended to stop at the Danforth. 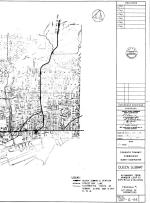 Back in October 1974, the TTC was considering various proposals for new rapid transit lines, one of which was the Queen Street subway. This line would have run from Roncesvalles and Queen east to somewhere beyond Broadview, then turned north past Greenwood yard and continued via Donlands to O’Connor. At that point, the line would cross the Don River to serve Thorncliffe and Flemingdon Parks winding up at the CPR crossing north of Eglinton. The map linked here is a bit fuzzy in places because the original is not clear, but it shows the alignment (including an alternative via the CNR corridor) quite clearly.

Ten years later, the TTC was working on the Downtown Rapid Transit Study, and the route had morphed into an ICTS line to Union Station.

A brochure advertised this study and explained the growing problem of central area subway congestion complete with a suggestion that passengers transfer at St. George rather than Bloor-Yonge. 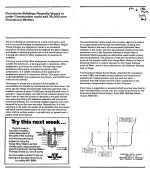 The DRL was never built because politics of the day favoured suburban projects, and instead we got the Sheppard Subway.