At its virtual meeting on May 13, the TTC Board will consider a report on the effects of the COVID-19 pandemic on TTC ridership and finances.

As an agency whose revenue depends heavily on fares paid by riders, any downturn in transit demand has a critical effect on TTC finances. This is compounded by the system’s reduced capacity to provide adequate distancing between riders, and so the amount of service required remains high even though there are far fewer riders. The report provides the simple explanation of the math:

The situation varies across the system with the subway and streetcar networks hardest hit because they serve the financial district downtown. Proportionately more people who would normally travel to this area are staying home or using other modes (walking, cycling, autos) to make their trips. The numbers below are based on Presto taps as a surrogate for demand. This is not the same as “ridership” because some trips do not involve a tap to enter a vehicle or station (pre-paid areas), and some taps represent transfers, not new trips. The proportional changes tell the story.

The effect on normally busy routes and stations is evident in the graphs below. 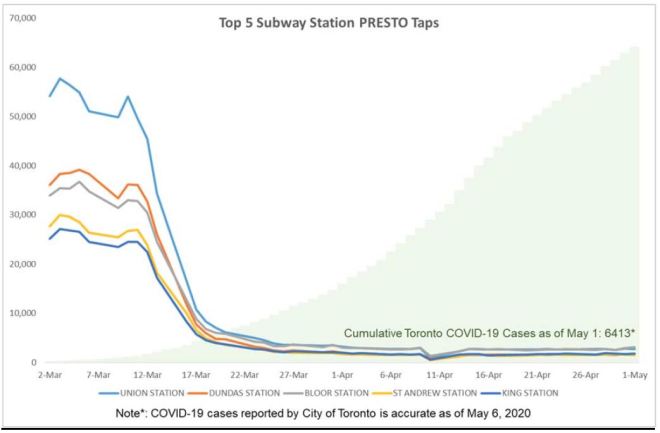 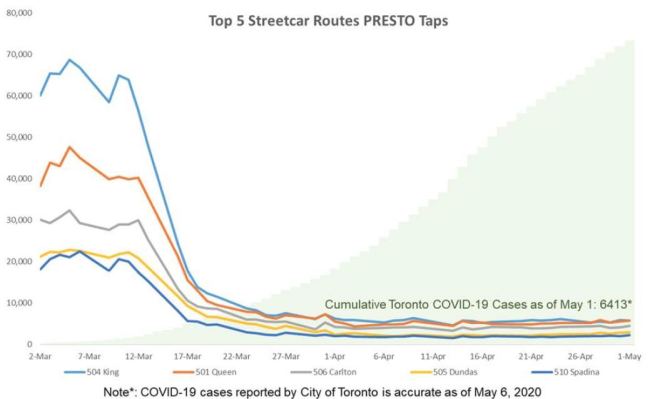 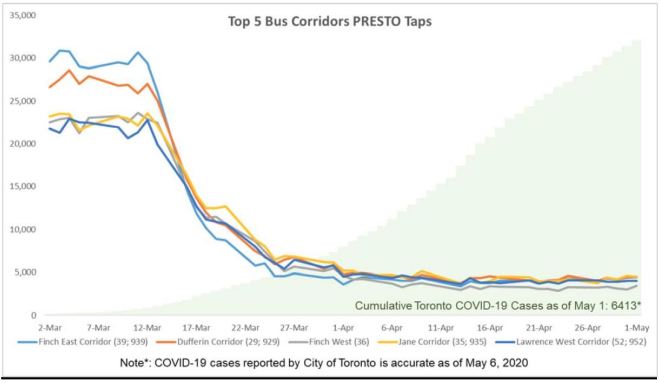 Fewer riders means fewer fares paid, with the drop bottoming out in mid-April.

Monthly pass sales dropped over 90 per cent as buyers chose to pay for rides, if any, with single fares. Note that the TTC has not made a decision on refunding passes purchased for March or April, and this is not discussed in the report. Refunds would bring an additional loss.

The change in system usage, measured by taps, is lower among seniors than for other fare groups. At 74 per cent, it is still substantial, but the difference probably reflects that more trips, proportionately, taken by seniors cannot be shifted or avoided. Student travel has, of course, collapsed as all schools are closed, as are alternatives such as shopping and entertainment.

Other revenue streams are also affected notably commuter parking and rents. The latter are only deferred on the assumption that they will be paid at a later date, not forgiven, and therefore they are not included in the table below. Rent revenue accounts for slightly more than $1 million per month ($14 million annually), and so it is on a par with commuter parking in the overall budget.

In addition to lost revenues, the TTC faces new costs. The table below breaks these down, and only one of the lines, Operator Absence Coverage, is non-recurring. This was the cost of overtime to maintain full service during the period when Operators began booking off work due to illness or self-isolation. 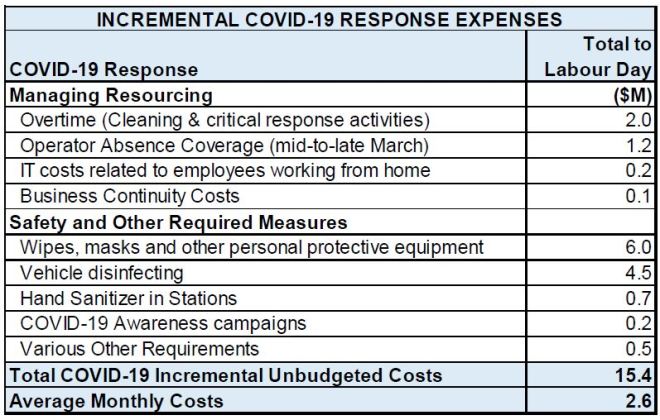 The TTC is providing support to City activities. Of the costs shown below, only the PPE cost (a donation of masks from TTC inventory to emergency services) is a one-time charge.

The TTC plans to reduce ongoing operating costs with service reductions and the reduction or elimination various areas. Service cuts bring a reduction in wages, maintenance, fuel and power costs, as well as lower Presto fees because these are a percentage of fare revenue.

The issue of layoffs of union and non-union staff is covered in a separate confidential report because this involves labour negotiations. The anticipated reductions in spending are included in the table below. Note that the weekly total, $5.5 million, is much less than the weekly revenue loss leaving a substantial amount to be made up from other sources.

Although the Capital Budget does not directly affect operations, it does affect overall draws by the TTC on City resources and on various subsidy programs. Overall, the TTC plans to reduce its capital requirements by $257 million in 2020, offset by the acceleration of $48.9 million in various projects. In the short term, this allows the City to redirect $116 million in provincial gas tax revenue that would normally go to capital spending to its recovery budget. (The gas tax funding already dedicated to operations is unchanged.)

Note that the gas tax redirection is a finite saving, and it will not be available to offset funding needs beyond Labour Day, at least until the next budget year. In turn, a downturn in motoring and related provincial revenues could affect the amount of money available to Toronto and other cities from that source.

Major items in the proposed changes include:

The full list is at the end of the TTC report, although it does not drill down to the individual project level in some cases.

Consolidating all of the anticipated effects and proposed changes yields the following summary.

I will update this article with any additional information that emerges at the TTC Board meeting.