This article is the second part of a series on the misrepresentation of service “improvements” in the TTC’s 2020 budget. Please refer to Part I for the introduction to the series.

In this installment, I will review routes broadly speaking in North York, East York and York. Overlaps with other parts of the city are inevitable. For comments on the east-west routes crossing Victoria Park into Scarborough, please see Part I.

As a refresher, here is the TTC’s map showing all of the routes where there were alleged service improvements in 2019.

The issue here is that the vast majority of the “improved” routes actually have longer scheduled headways (the gap between vehicles) in the new schedules than in the old. This provides extra running and recovery time for the worst trips, but more generally simply means that scheduled frequency and capacity go down. The TTC has not reported crowding information to indicate what effect this has on riders. Some of the affected routes are relatively small and may not be at capacity in their “before” schedules, but this tactic is applied across the system including on major routes. 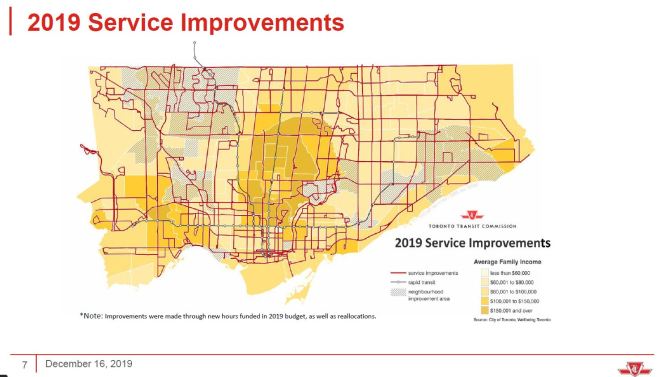