The overnight “Blue Night” network will see many changes and additions this fall. These will be rolled out in two waves: first with the September/October schedules on Labour Day weekend, and the remainder with the October/November schedules at Thanksgiving.

This is part of a more extensive expansion of service beginning in September that relates to the Ten Minute Network, All Day Every Day service, and improved crowding standards on routes with frequent service. Those and other changes will be described in a separate article.

Here are maps of the network as it exists now, and with the two stages of additions: 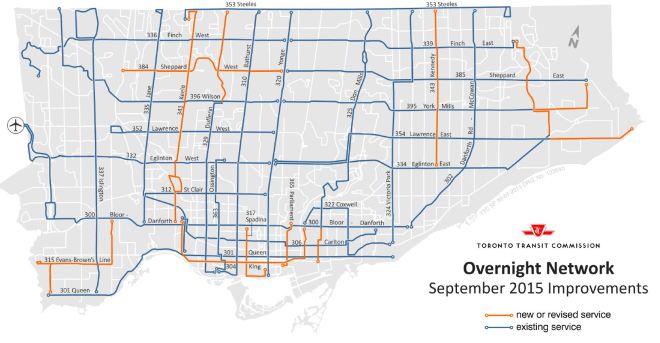 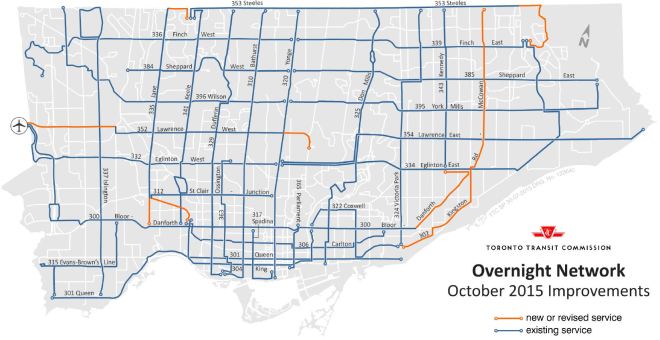 Several of the routes will be renumbered so that the night services match the daytime routes except for the using “300” series. In the case of the King and Spadina night services, they will run, at least initially, with the daytime route numbers because there are no roll signs for “304 King” or “317 Spadina” in the CLRV/ALRV fleet. This problem will vanish as the routes convert to Flexity cars with programmable signs.

All services will operate on 30 minute headways.

This implementation is a work-in-progress, and Service Planning does not expect to turn to the question of timing points until the routes are in place. This is a vital piece of work for a network with wide headways where TTC performance stats show that headway (and, by implication, schedule) adherence is very weak. Riders of these routes should be able to depend on vehicles appearing at expected times and connections to work in a predictable way. This is as important a part of the new service as simply putting the buses and streetcars on the road. If service is not predictable in the middle of the night, riders cannot be expected to use it especially for trips that are time-sensitive such as early morning work shifts.

END_OF_DOCUMENT_TOKEN_TO_BE_REPLACED

Recent articles on this site looked in great detail at the 501 Queen car and the problems with its service. Often, when people talk about Queen, they miss the streetcar routes that are, in effect, branch operations of the Queen line serving Kingston Road in The Beach:

This service design has been in place, with only a few changes, since 1948:

The route name “Downtowner” arose from an ill-advised proposal to provide “relief” to the downtown subway by extending Kingston Road cars from McCaul Loop west and north to Bathurst Station in 1973. This didn’t last long. A year later the extended service became a peak-only operation, and that remained, on paper at least, until 1984. We have the name as a memento of that extension now 30-years in the past. The basic problem was that very little of the service actually reached Bathurst Station with many cars short turning either at Wolseley Loop (Queen & Bathurst) or at McCaul Loop.

The situation is not unlike what we see today because the 502 Downtowner schedule does not provide enough running time, and short turning is a chronic problem. This is particularly troubling because the short turns defeat the purpose of the route’s existence:

This is compounded by extremely erratic headways that are far worse than I have seen on any other route I have analyzed. According to TTC route performance stats, the 502 is “on time” (that is to say, within ±3 minutes of the scheduled headway) 30% of the time. As we will see later, even that claim is a stretch.

As for the 503 Kingston Road Tripper, service on that route is supposed to be blended with the 502, and during AM peaks it can work out, sort of, there is a vaguely reliable headway of alternating 502/503 cars on Kingston Road. But it’s a hit-and-miss situation, and very large gaps in 503 service are quite common.

Anyone attempting to use transit on or to Kingston Road is well advised to get on the first thing that shows up and be prepared to transfer. This appalling situation is a mockery of what the TTC claims is its “customer service”.

Service on Kingston Road was substantially better in past decades, and it is no wonder that ridership and scheduled service levels have fallen given the unpredictable nature of these routes. Recently, there has been some improvement. In April 2013, off-peak headways of 502 Downtowner improved from 20 to 16 minutes, and in June 2015, from 16 to 10 minutes. However, the fundamental problem of headway reliability undoes much semblance of “improvement”.